Steve Chapman
|
Posted: Apr 07, 2016 12:01 AM
Share   Tweet
The opinions expressed by columnists are their own and do not necessarily represent the views of Townhall.com. 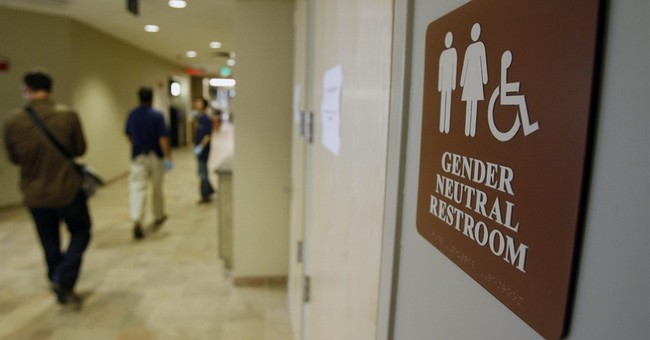 Some residents of North Carolina don't like the idea of sharing restrooms with transgender men and women, and they were pleased to learn that, thanks to a new law, they won't have to. I have news for them: They already have. They just didn't know it. And they will again.

In February, the Charlotte City Council approved an ordinance strengthening protections against discrimination based on sexual orientation or gender identification. It included a provision stipulating that transgender men may use men's restrooms and transgender women may use women's restrooms.

That provision brought on a hailstorm of fury and disbelief, and the North Carolina Legislature quickly passed a bill to overrule it. The Charlotte ordinance "defies common sense and basic community norms," said Gov. Pat McCrory on signing the state law.

"We've had these proper etiquette situations for decades in our country," he argued, "and all of a sudden, through political correctness, we're throwing away basic etiquette." Under the new policy, North Carolinians will have to use the restroom corresponding to the sex denoted on their birth certificates.

"No Men in Women's Bathrooms," read one of the signs brandished by opponents of the Charlotte measure. That sounds like a good reason to reject it -- if you don't think very hard.

Under the new state law, a woman who undergoes sex change surgery, takes hormones and has a penis, a deep voice and facial hair will be required to use the women's restroom. In the name of protecting daughters from unwanted male intruders, the Legislature and governor are exposing them to exactly that. Men, meanwhile, will have to share facilities with people wearing skirts and lipstick.

This policy will cause far more discomfort than it will prevent. What McCrory and others forget is that transgender men generally go unnoticed in men's restrooms, for the simple reason that they appear to be men. In fact, the odds are very good that at one time or another, you have unwittingly done your business alongside someone who is transgender -- with no ill effects.

Even in North Carolina, that will keep happening. If someone with breasts and long hair enters a women's restroom, strangers usually won't realize this person was born with a full set of testicles. If a muscular, bearded person in a suit strides up to a urinal, the guys at the others aren't going to ask for proof he is a male. In these cases, ignorance is bliss.

What will generate problems is transgender people's obeying the North Carolina law. But that may not happen often. It's not as though anyone has a clue how to enforce this mandate. Without a cop stationed at every entrance demanding birth certificates, most transgender people will probably go on doing as they've done, invisibly, in the past.

The oft-stated fear is that male child molesters will dress up as women to find girls to victimize. But what's stopping them from doing that now?

And where is the epidemic of abuse where transgender people are allowed to choose restrooms? The liberal watchdog group Media Matters for America contacted law enforcement officials and other experts in 12 states and found none who was aware of any such incidents.

McCrory thinks all we need to do is uphold "basic community norms." But the traditional norm for people with gender dysphoria has been to deny, suppress or hide their true nature -- so that everyone else could operate in comfortable denial.

The traditional norm these people could expect if they were found out has been hostile and often violent. This week, a Brooklyn man pleaded guilty to manslaughter for killing a 21-year-old transgender woman. He had been flirting with her, and when he found out she was not exactly what he assumed, he flew into a rage and beat her to death.

Barring transgender people from the restrooms they prefer exposes them to harm by exposing something they may want to be secret: that they are transgender. In addition, a lawsuit filed against the North Carolina law noted, "if a transgender woman were to use the men's restroom, she likely would be harassed and might be assaulted by men who believed that she should not be in the men's restroom." Transgender men emerging from women's restrooms may incur violence from angry fathers or husbands.

The North Carolina law makes perfect sense if you're willing to pretend that transgender people don't exist. Too bad they won't cooperate.