Steve Chapman
|
Posted: Mar 13, 2016 12:01 AM
Share   Tweet
The opinions expressed by columnists are their own and do not necessarily represent the views of Townhall.com. 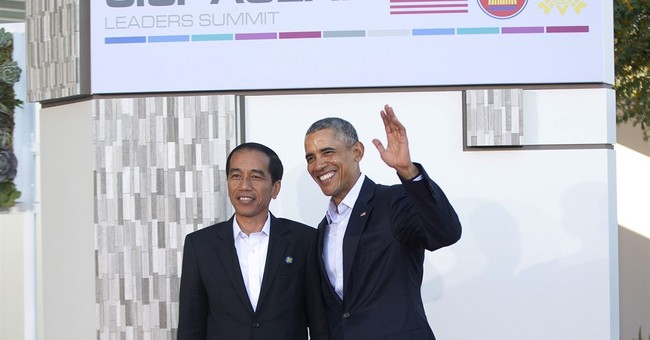 Trending
On the campaign trail, Barack Obama's foreign policy gets no love. Republicans portray it as weak, timid, inept and rudderless. Hillary Clinton has faulted him for the rise of the Islamic State and lacking a strategy. Bernie Sanders doesn't rush to Obama's defense.

The public seems to agree the president has fallen short. In the latest Economist/YouGov poll, only 36 percent of Americans approved of his handling of international affairs, with 49 percent disapproving. Fear of terrorism is at the highest level since the aftermath of 9/11.

In a turbulent world beset by unpredictable and often violent changes, it's easy to deduce that the president is generating dangerous chaos. But blaming Obama for the upheaval is like arriving in town after the tornado and blaming the Red Cross for the wreckage. History is more likely to give him credit for adopting a sober strategy and making it work.

It's not hard to find achievements on his record. He decimated al-Qaida and killed Osama bin Laden. He completed the withdrawal from Iraq. Working with Russia, he induced Syrian President Bashar Assad to agree to give up his chemical weapons.

A climate change agreement committed 195 nations to curb emissions that pose a dire threat to the entire world. A landmark deal with Iran reversed its march toward acquiring the bomb.

The last two items are portrayed as insane folly by Republicans who think global warming is a hoax and the Iran agreement will fail. The facts tell a different story. The planet has continued getting hotter over the past seven years. Iran has disabled a reactor, eliminated thousands of centrifuges, shipped enriched uranium out of the country and accepted stringent inspections.

Perhaps more important than what Obama has done is what he has chosen not to do. He refused to undertake a war against Assad. He rejected aggressive action when Russia invaded Ukraine. He avoided entanglement in Libya.

He didn't send large numbers of ground forces to fight the Islamic State. His preferred military option has been one notable for minimizing costs and risks to Americans: drone strikes.

An interview with Jeffrey Goldberg in The Atlantic makes clear that these choices grew out of a shrewd sense of limits and priorities. Obama "believes that Churchillian rhetoric and, more to the point, Churchillian habits of thought, helped bring his predecessor, George W. Bush, to ruinous war in Iraq," writes Goldberg. "He was particularly mindful of promising victory in conflicts he believed to be unwinnable."

He has no use for the notion that the U.S. should jump into conflicts to preserve its credibility. "Dropping bombs on someone to prove that you're willing to drop bombs on someone is just about the worst reason to use force," Obama has told aides.

Even his defenders think he blundered in promising a penalty if Assad used chemical weapons and then changing his mind. But Obama obviously thinks that if he erred, it was in the original vow, not in the ultimate forbearance.

What he calls "the Washington playbook" prescribed robust intervention. But that approach is "a trap that can lead to bad decisions," he told Goldberg. "In the midst of an international challenge like Syria, you get judged harshly if you don't follow the playbook, even if there are good reasons why it does not apply." It was "as tough a decision as I've made" -- but "the right decision."

Sacrificing American lives in idealistic crusades is not something he's willing to do. An unsentimental skeptic, Obama sometimes clashes with advisers pushing for action to avert humanitarian disasters. "I want a president who has the sense that you can't fix everything," he says. Privately, he's enunciated his chief rule: "Don't do stupid (stuff)."

His biggest departure from that policy was in Libya, where he authorized airstrikes against Moammar Gadhafi. "We actually executed this plan as well as I could have expected," he says. "And despite all that, Libya is a mess." The debacle, Goldberg writes, "sealed Obama's fatalistic view."

That revelation alone distinguishes Obama from one wartime president after another -- in his ability to acknowledge a serious failure, avoid compounding it and learn from the experience.

As the unforeseen consequences of the Iraq War continue reverberating through the Middle East, Obama deserves credit for sparing us from new mistakes. Right now, it may be hard to appreciate the value of his restraint. But we'll miss it when he's gone.