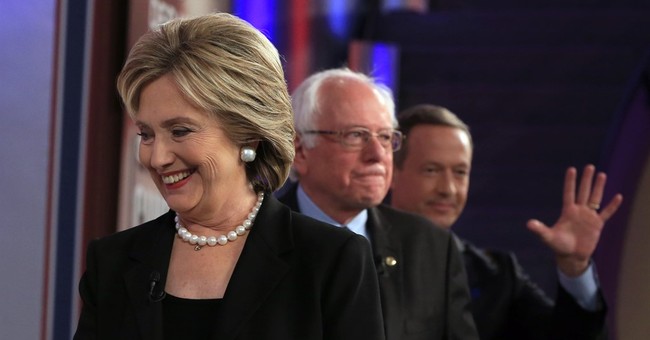 It must have been tough for Bill Clinton to come up with a good Christmas present for his wife this year. She didn't have to ask for much from him or Santa, because the political gods have already given her just about all she could want.

Hillary Clinton has never been an ideal candidate for president. If she were, she'd be looking forward to her final year in the White House instead of reacquainting herself with the charms of a New Hampshire winter. The flaws that sank her against Barack Obama remain: She's a wooden campaigner. She has a maddening penchant for secrecy and dissembling. She has accumulated a long record of scandals and dubious choices during her decades in public life. She voted for the Iraq War.

Four years as secretary of state yielded more minuses -- the failed Russia "reset," Benghazi, her private email server -- than pluses. Carly Fiorina landed a telling blow when she said, "If you want to stump a Democrat, ask them to name an accomplishment of Mrs. Clinton's." If elected, she'd be the second-oldest person ever inaugurated.

But none of these vulnerabilities has derailed her campaign. On the contrary, they have been turned into irrelevancies or even assets. Almost everything that has happened in the past six months has worked to Clinton's advantage.

First is the weak field of other candidates for the Democratic nomination. Bernie Sanders' grim demeanor, leftist policies and modest debating skills have kept him a distant second in national polls. He's close in Iowa and leading in New Hampshire, but even if he were to win those contests, it's hard to see his route to the nomination against an opponent with a heavy advantage in funding and organization elsewhere.

There was one person who posed a real threat: Elizabeth Warren, whose populist message and pugnacious style enthrall Democrats in a way Clinton never has. On top of that, the senator from Massachusetts would have neutralized the historic potential of Clinton as the first female president. When Warren decided against a race, she gave Clinton an open highway.

Second is the weak field of candidates for the Republican nomination. Clinton had to worry that someone with appeal beyond the GOP base would rise to the top -- Jeb Bush, Marco Rubio, Chris Christie or John Kasich.

Bush, a fluent Spanish speaker whose wife was born in Mexico, or Rubio, a Cuban-American, also had the chance to recapture Hispanics who have abandoned the GOP. Clinton faced the difficulty of persuading voters to give the same party three consecutive terms in the White House -- something accomplished only once since 1953.

But the GOP has done its best to come to her aid. The leading candidate, Donald Trump, has the highest unfavorable rating of anyone in either party's race. His campaign is brilliantly engineered to drive Latinos, blacks and Muslims into the Democratic camp -- along with women, 56 percent of whom voted Democratic in the 2012 presidential election. His closest rival, Ted Cruz, has run a cartoonishly ideological campaign that is bound to alienate everyone except tea party stalwarts.

If you assume his Cuban heritage would help him with Hispanics, keep in mind that the other senator from Texas, John Cornyn, got a considerably bigger share of the Latino vote in 2014 than Cruz did in 2012. Note also Cruz's latest attempt at humor: "The new politically correct term is no longer 'illegal aliens'; it's 'undocumented Democrats.'" Hispanics will take the hint that their place is not in the GOP.

Not only do Trump and Cruz have serious liabilities for the general election but their flaws help to hide Clinton's. Next to their incendiary rhetoric, her stolid manner and tedious oratory make her look serious. Juxtaposed with their vast inexperience in foreign affairs, her years of diplomacy convey that she knows her way around a perilous world. On the ultimate presidential question -- "Whom would you trust with the nuclear button?" -- Trump and Cruz represent the ultimate risk. Cruz has even hinted at nuking the Islamic State. Clinton manages to connote sobriety and safety.

There are many good reasons she should not be president. But the way it's shaping up, this campaign could make Americans forget them.