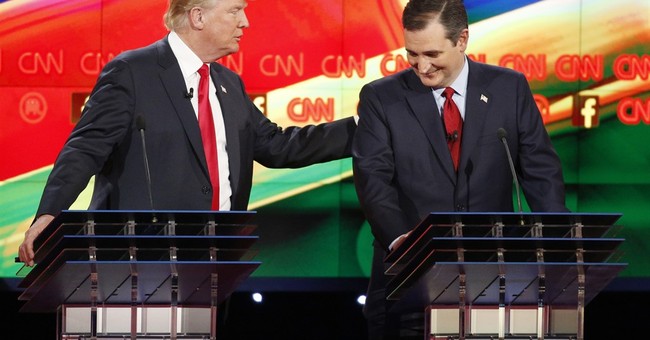 Trending
After the Paris and San Bernardino attacks, Americans are simultaneously eager to smash the Islamic State and wary of another major ground war in the Middle East. Some presidential candidates have found the perfect way to satisfy both impulses: turning large swaths of Iraq and Syria into a smoking heap of debris and body parts.

Donald Trump has said, "I would bomb the s--- out of them." Ted Cruz has vowed, "We will utterly destroy them. We will carpet-bomb them into oblivion."

They haven't gotten to the point reached by John McCain in 2007, when he sang a few bars of what he called "that old Beach Boys song 'Bomb Iran.'" But Cruz shares McCain's capacity for amusement. "I don't know if sand can glow in the dark, but we're going to find out," he promised an audience in Iowa.

Neither candidate is likely to pay a political price for embracing wanton destruction. Massive, merciless aerial bombardment sounds good to voters because it's simple, low-risk and spectacular on TV.

Nothing could be better than annihilating vicious enemies at minimal risk. A recent Washington Post-ABC News poll found 73 percent of Americans favor expanded airstrikes on the Islamic State, also known as ISIS.

But it's a solution that won't solve. The first flaw is that even the most ferocious use of air power can't "completely destroy ISIS" as Cruz imagines. The second is that it stands to multiply our enemies and magnify the dangers we face. And that's leaving out the matter that Trump and Cruz ignore, which is the death and injury inflicted on innocents.

Conventional bombing of German and Japanese cities failed to end World War II. During the Vietnam War, the U.S. dropped millions of tons of bombs, killing upward of 100,000 civilians, but the enemy survived and prevailed. In his 1996 book, "Bombing to Win," University of Chicago defense scholar Robert Pape said the clear lesson of history is that "strategic bombing doesn't work."

The goal in past wars has been to force a government to capitulate by inflicting unbearable pain on its people or causing them to revolt. That's a non sequitur in this case because there is no government to be coerced or toppled.

The Obama administration has been using air power against the Islamic State for more than a year. During that period, the U.S. military has delivered more than 20,000 missiles and bombs on the enemy -- which is a lot, considering that ISIS is estimated to have as few as 20,000 fighters.

Cruz says we carried out far more airstrikes against Iraq in the 1991 Gulf War. But then, we were fighting an established state with a 1 million-man army and a vast multitude of military assets. This war is more akin to going after the Taliban in Afghanistan in 2001.

Newsweek reported then that the Bush administration had abandoned plans for an air campaign in Afghanistan because it couldn't find enough worthwhile targets -- not because George W. Bush was too timid. As he put it, "I'm not going to fire a $2 million missile at a $10 empty tent and hit a camel in the butt."

In Tuesday's debate, Cruz was asked whether he would carpet-bomb Raqqa, the Syrian city of 220,000 people that is the de facto capital of the Islamic State. He replied, "You would carpet-bomb where ISIS is, not a city but the location of the troops."

It was a non-answer. Does Cruz mean the enemy may lodge itself with impunity in urban neighborhoods? Or does he mean he would obliterate civilian areas if fighters are present there?

The latter has risks beyond being a likely war crime. Pape, who heads the Chicago Project on Security and Terrorism, told me that after the 2004 U.S. seizure of Fallujah, which caused hundreds of thousands of civilians to flee the city, al-Qaida in Iraq reaped so many new recruits that it quadrupled in size.

Such experiences caused Defense Secretary Donald Rumsfeld to wonder, "Are we creating more terrorists than we're killing?" Civilian casualties from American drone strikes -- which are far more precise than what Trump and Cruz propose -- have been numerous enough to alienate most Pakistanis and inspire some to commit terrorism.

President Richard Nixon, who greatly expanded aerial bombing in Vietnam, publicly boasted that his strategy was effective. He was lying. In 1973, he wrote a memo to his national security adviser that summarized his honest assessment of the net result: "zilch."