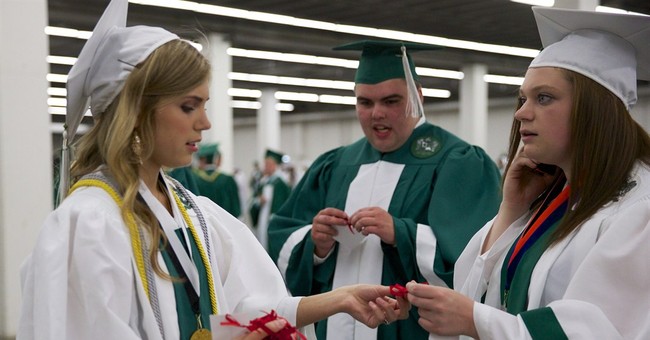 The government normally doesn't care whether you or I accumulate large bills for home improvement, a new car or exotic vacations. But Barack Obama feels no hesitation in concluding that the cost of higher education has placed "too big a debt load on too many young people." Therefore, something must be done.

The problem with Obama's analysis is defining "too big." Compared to what? Most of these young people, often in conjunction with their parents, have voluntarily shouldered student loans to pursue their studies. If they thought the burden was too heavy, they didn't have to take it on.

They have done so not because they are careless wastrels, but because they place an accurate value on higher education. They comprehend that it is very likely to pay for itself and that forgoing it would be the most costly option of all.

The president says the debt burden makes it hard for these people "to start a family, buy a home, launch a business or save for retirement." But they would most likely have even less money for those purposes had they avoided borrowing by avoiding college.

That's because people with bachelor's degrees make more money than people without -- nearly twice as much, on average. Not only that, but the value of higher education has risen substantially. Over the past 50 years, the real value of a degree has tripled.

Some perspective is in order. Though some students acquire huge debts, two-thirds graduate owing $10,000 or less, and only 2 percent owe more than $50,000. Not all of the latter need to worry. A newly minted doctor, lawyer or MBA from a good school can expect an income more than adequate to the need.

Obama wants to let some five million borrowers cap their monthly repayments at 10 percent of their income and, after 20 years, be relieved of any remaining balance. What would the change cost? "We'll figure that out the back end," said Education Secretary Arne Duncan, in one of the more alarming budget projections ever issued.

The administration blames the problem on the growing cost of higher education. It has a point. College costs have risen much faster than other prices. In 1973, annual resident tuition at the University of Illinois at Urbana-Champaign was $496 -- which is $2,566 in today's money. For the 2013-2014 academic year, the sticker price for U of I freshmen was $11,834 -- four times more, in real terms, than their parents might have paid.

But thinking that more federal aid will make college affordable is like believing that a dog can catch its tail if it goes faster. One reason colleges charge so much more today is that federal aid makes it easier for students to cover the bill. The more the government does the less reason students have to demand cost control, and the higher tuition will climb.

Forgiving more debts after 20 years (10 for those in "public service" jobs), as Obama proposes, adds to the expense inflicted on taxpayers without doing borrowers much good in the meantime.

Among those taxed to provide these benefits are people who earn less than college graduates because they didn't go to college. If it seems unfair for people to shoulder big loans to finance their degrees, it's even more unfair for people without degrees to share the sacrifice.

A better idea than Obama's is to make repayments simpler and more efficient by shifting to paycheck deductions, like Social Security taxes, at a rate chosen by the borrower, for up to 25 years. This gives borrowers more flexibility in the short run and the long run. University of Michigan professors Susan Dynarski and Daniel Kreisman, who devised the plan, figure it would cost taxpayers no more than the current program and might cost less.

The other thing that would really help is a stronger economy, which would put more debt-ridden grads into the jobs they prepared for. Any loan terms are tough for the unemployed and underemployed.

But the rising cost of college mainly stems from the fact that people are willing to pay a lot because it's so valuable, and it won't stop going up until it declines in value or they become more cost-conscious.

Obama says he really cares about the issue because he and his wife paid off their loans just 10 years ago. Obviously he wishes their education had cost less. But note: He doesn't say it wasn't worth it.