An Oversold Weapon Against Breast Cancer 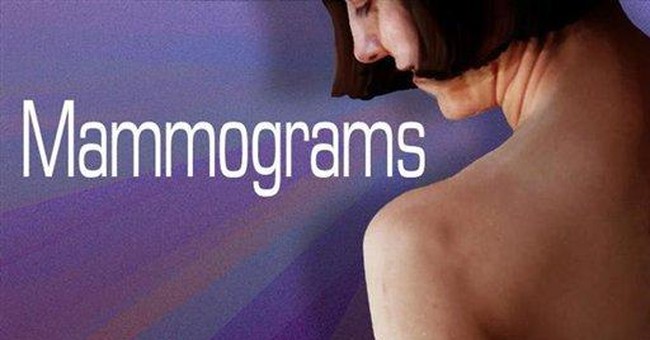 Trending
In 1999, newspaper columnist Molly Ivins was diagnosed with breast cancer and promptly exhorted her readers: "Go. Get. The. Damn. Mammogram. Done."

She also quoted a friend, columnist Marlyn Schwartz, who lamented, "If you have ever wondered what it would feel like to sit in a doctor's office with a lump in your breast trying to remember when you last had a mammogram, I can tell you. You feel like a fool."

Ivins' breast cancer killed her in 2007. She didn't say whether she had gotten regular mammograms before her diagnosis. If so, she was spared something many a dying breast cancer victim has endured: profound, awful regret at failing to undergo a procedure that would have saved her life.

It turns out now that this kind of regret is misplaced. Mammograms, as administered in advanced nations, do not save lives. Get one done, don't get one done -- either decision is very unlikely to affect your lifespan.

That's the verdict of Canadian medical researchers who followed thousands of women over 25 years and published their results in the British Medical Journal this past week. "Annual mammography in women aged 40-59 does not reduce mortality from breast cancer beyond that of physical examination or usual care," they found. An accompanying editorial carried the headline: "Too much mammography."

Mammograms do detect some cancers that can't be felt in a physical exam, and some of these are life-threatening. So how come finding some cancers earlier doesn't save lives? Two reasons: Most instances of breast cancer can be successfully treated even when caught later, and some can't be successfully treated even when caught early.

The proliferation of mammography has coincided with a decline in breast cancer deaths, which gives the impression that the former caused the latter. In truth, improved survival rates stem mostly from improved treatments.

With regard to routine mammogram screening, H. Gilbert Welch, a physician and professor at the Geisel School of Medicine at Dartmouth, told me, "I genuinely believe that some women are helped, but the number is very small and getting smaller."

Mortality aside, early detection sometimes spares women aggressive treatments they would require if they were diagnosed later. But more often, it subjects patients to surgery and other measures they don't need.

If this process helped only a few women while doing nothing for the others, it would be easy to justify. The problem is that it harms far more women than it helps.

In a recent article in the Journal of the American Medical Association, Welch and Geisel colleague Honor J. Passow calculated that for every 50-year-old woman who avoids death from breast cancer through annual mammograms, at least 153 (and likely far more) suffer false alarms and at least four are "treated needlessly with surgery, radiation and/or chemotherapy."

In fact, over a decade of annual screenings, half or more of patients will be the victims of false positives that at best induce anxiety and at worst require surgery or other treatments for cancers that would not harm them. "My value judgment is that a population-based screening program that alarms half the population is outrageous," says Welch.

The point is not that the mass of American women should avoid annual mammograms. It's that they shouldn't do them without understanding that the procedure carries a small prospect of a large benefit and a large prospect of a small harm.

Women are not the only people who face this sort of dilemma. A widespread test for prostate cancer works almost identically. It detects a lot of cancers that are either unlikely to be fatal without treatment or very likely to be fatal even with treatment, while exposing many men to needless fear as well as treatments with serious side effects. The U.S. Preventive Services Task Force now recommends against it for routine screening.

Annual mammograms for breast cancer are expensive. Putting every woman through it annually starting at age 40 would cost a total of $10 billion a year. Starting the screenings at age 50 and doing them every other year until age 69 would cost $8 billion a year.

That's about twice what the government's National Cancer Institute spends annually on cancer research. Money spent on mammograms could be used in ways that would save more lives.

How should we feel about a health care system that has long put so much faith in such a flawed instrument? At least a little foolish.