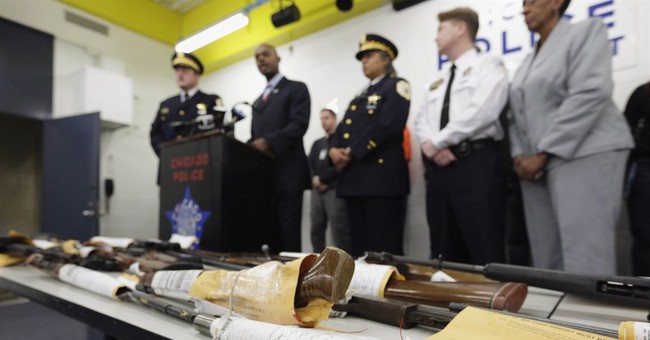 Since the death of communism in most of the places where it once prevailed, North Korea and Cuba function mainly as educational exhibits for an irrelevant and unsuccessful ideology. When it comes to the Second Amendment right to keep and bear arms, the city of Chicago fills a similar role.

The city is famous for some of the strictest gun laws in the country. In 1982, it approved a near-total ban on handguns. In 1992, it outlawed "assault weapons." Mayors and aldermen never tired of railing against firearms.

In 2008, when the Supreme Court struck down a handgun ban in Washington, D.C., it was clear that Chicago was on what liberals often refer to, in other contexts, as the wrong side of history. But the people in City Hall were either not smart enough or not honest enough to make peace with change. They preferred to emulate the cavalry troops in "The Charge of the Light Brigade," who rallied to the call, "Charge for the guns!" despite the certainty of defeat.

In the 2008 verdict, the justices said the Second Amendment upholds an individual right to possess firearms for self-defense. But the city fought a legal challenge to its handgun ban -- only to lose, predictably, in the Supreme Court.

Besides being a legal and policy setback, it was a loss for taxpayers, who had to pay not only the cost of defending the ordinance but the cost of challenging it. Chicago was obliged to pay $1.4 million to the National Rifle Association, which won the lawsuit.

Did this expensive indignity persuade Mayor Richard M. Daley to abandon the fight? Ha. He pushed through a new ordinance intended to demonize and discourage gun ownership as much as he could get away with -- which, as became apparent, was not very much.

The measure required gun owners to get at least five hours of training, including one hour at a shooting range. In a novel twist, though, it outlawed "shooting galleries, firearm ranges or any other place where firearms are discharged." The city claimed proper training is vital while hindering residents from getting it.

This section prompted another lawsuit, which argued that the right to own a gun for protection was of limited value if owners had no chance to achieve and maintain proficiency in using one -- and that they shouldn't have to leave the city to comply with the city's very own rules. A federal appeals court agreed.

Judge Ilana Rovner said, "The ordinance admittedly was designed to make gun ownership as difficult as possible." But she noted pointedly that the Supreme Court has upheld "the Second Amendment right to possess a gun in the home for self-defense and the City must come to terms with that reality."

The same ordinance dictated that every gun be registered (even though Illinois already required every gun (SET ITAL) owner (END ITAL) to register with the state). The courts never got to consider the constitutionality of that requirement, because the General Assembly passed a law overruling it.

A federal appeals court, however, did order the state to grant permits to carry concealed handguns, as every other state does. In short order, Chicago went from completely banning handguns to having to let licensed owners pack them in public.

Defeats don't get much more total than that. But like the Washington Generals, who get beat by the Harlem Globetrotters every night, the city stubbornly insists on entering contests it is bound to lose.

The latest was Monday, when a federal district judge invalidated the city's ban on the sale or transfer of firearms. The ordinance makes it illegal to operate a federally licensed gun shop or even for a father to give a gun to his son.

As usual with Chicago gun laws, it went too far. "The ban on gun sales and transfers," wrote Judge Edmond Chang, "prevents Chicagoans from fulfilling, within the limits of Chicago, the (SET ITAL) most fundamental (END ITAL) prerequisite of legal gun ownership - that of simple acquisition."

This should come as no surprise to anyone who has paid attention to the Supreme Court's reasoning on the Second Amendment. But Chicago politicians have let their hostility toward guns and gun owners blind him to the obvious.

The old proverb says there's no education in the second kick of a mule. But for some people, once is not enough.