An End to Spending Excess? 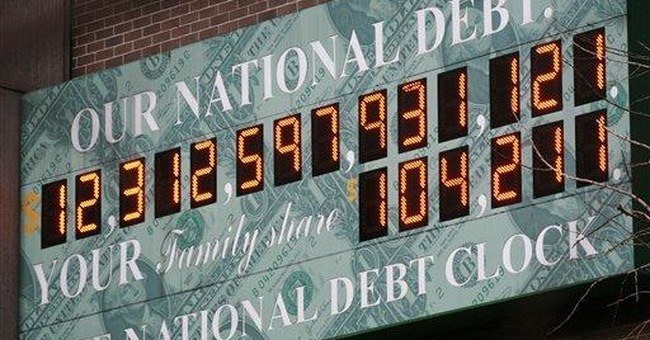 One of the reasons the federal budget is chronically in the red is that most people, historically, couldn't care less. The national debt is an unfathomable abstraction that doesn't show up on your 1040 or your monthly bills. Over the last few decades, very few people lost sleep worrying if the budget would ever be in balance.

Keynesian economics, as well as political incentives, argued for ignoring the issue. When times were good, we could afford to indulge. When times were bad, deficit spending was the accepted formula to stimulate the economy.

The voters' lack of concern enabled both parties to indulge their natural instincts. Democrats contributed by enacting costly new programs. Republicans did their part by cutting taxes. Fussbudgets who called for fiscal responsibility were treated like the adult chaperone on the college kids' trip to Cancun.

There was rarely a moment when it seemed imperative to live within our means. That's how the publicly held government debt rose tenfold from 1977 to 2008.

It's hard to believe now that during the 1990s, a Democratic president and a Republican Congress worked together to not only wipe out deficits but produce surpluses -- for four consecutive years.

That ended after 2001, with war and recession providing the Bush administration all the excuses it needed. Today, the Clinton-era discipline seems like an inexplicable fit of sobriety in a long-running bender.

But even incorrigible drunks sometimes hit bottom and realize they can't go on partying forever. They see that if they continue, they will throw away everything else they value. It can be enough to make them change their ways.

Maybe Americans are reaching that point when it comes to federal spending and taxes. After years of paying no attention to the national account books, they have had a glimpse of just how bad things are, and they've reacted with horror.

In a Gallup poll conducted last month, 79 percent of Americans said federal debt is an "extremely serious" or "very serious" problem -- more than any other issue except terrorism, with which it tied. A survey by the Pew Research Center found "the highest percentage volunteering the deficit as a top national problem in nearly two decades."

What brought this was the spending surge that began in 2008 under President George W. Bush and continued under President Barack Obama. After years of comparatively moderate irresponsibility, the government began spraying money with a fire hose -- on bank bailouts, insurance company bailouts, automaker bailouts and stimulus packages.

Between fiscal year 2007 and fiscal year 2008, the deficit nearly tripled, and the following year it tripled again. Citizens got the sense that we were no longer sliding toward bankruptcy; we were tumbling off a cliff.

As polling expert Karlyn Bowman of the conservative American Enterprise Institute puts it, "Cumulative sticker shock has set in." In March 2009, 52 percent of Americans endorsed Obama's handling of the deficit. Today, only 36 percent approve.

The consequence is growing resistance to spending initiatives. Even the Obama stimulus package was smaller than most liberal economists wanted. The president has been induced to propose a three-year freeze on non-security discretionary spending -- and congressional leaders in both parties have bought in.

His budget director has asked every federal agency to come up with cuts amounting to 5 percent of their outlays. Democrats had to cut back a proposed jobs bill, and even in shrunken form it got voted down Wednesday by the Senate. For the first time in quite a while, politicians are forced to trim their plans to match a public mood of frugality.

Does that signal a lasting skepticism about the expansion of government programs? Maybe not. Bowman tells me the historical pattern is that "when we think we and our families are doing OK, we seem to be more comfortable letting government do a bit more."

But the past is not always a guide to the future. The fiscal events of the last two years have been seared into the national consciousness in a way no previous spending binge has. For the foreseeable future, at least, there will be a heavy burden on those who favor more expenditures to justify them.

We have not reached a new era of consistent budgetary restraint. But it looks like the age of excess is over.