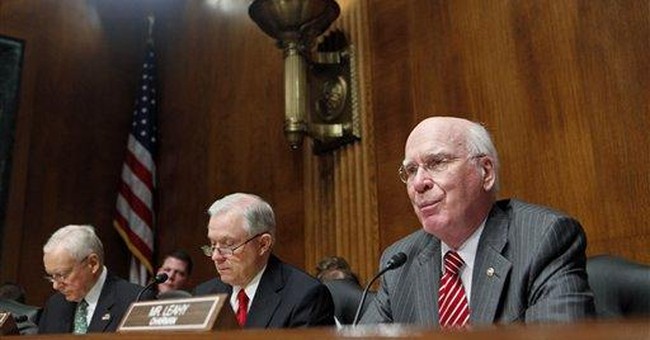 If Medicare were a bank, federal regulators would be closing its doors, selling its operations and sacking its managers. Thanks to soaring costs, the program is fast running out of money -- even though it pays such low fees that many doctors refuse to take Medicare patients. Meanwhile, Medicare fraud costs taxpayers some $60 billion a year, according to a report by CBS's "60 Minutes," making it among the most profitable fields for felons.

Senate Majority Leader Harry Reid capitulated to his party's more liberal elements when he said he will insist that health care legislation include a "public option" -- a government insurance plan -- to bring "meaningful reform to our broken system." But deploying a version of Medicare to repair the status quo is like using a brick to improve a window.

President Obama says it would help consumers by giving private insurers some real competition. But the typical state has 27 companies competing in the small-group health insurance market. If there were insufficient competition, the health insurance sector wouldn't rank 86th among American industries in profitability.

Health care plans average profits of just 3.3 percent. In wireless communications, a vigorously contested market, profits are 11 percent. Does Obama think we need a government cell-phone company to compete with Verizon and AT&T?

The proponents also believe that, like Medicare, a new government plan could be run far more efficiently than private firms. Don't make me laugh. Medicare, keep in mind, is going broke. And its alleged efficiencies are illusory or nontransferable.

Health economists Regina Herzlinger of Harvard and Robert Book of the Heritage Foundation note that on a per-person basis, Medicare has higher administrative costs than private firms. They look smaller only because the average Medicare patient uses more services than the average private insurance patient. "Expressing them as a percentage makes Medicare's administrative costs appear lower because they are spread over a larger base of health care costs," write Book and Herzlinger.

A "public option" might duplicate one of Medicare's means of saving money: limiting reimbursements to doctors and hospitals to far less than what private insurers pay. But 19 health-care organizations that support reform, including the Mayo Clinic, explained the flaw in that approach.

"Under the current Medicare system, a majority of doctors and hospitals that care for Medicare patients are paid substantially less than it costs to treat them," they said in an open letter to Congress. "Many providers are therefore already approaching a point where they can not afford to see Medicare patients." Last year, the government's Medicare Payment Advisory Commission reported that 29 percent of recipients who were looking for a primary care physician had trouble finding one.

Skimpy reimbursements lower Medicare's costs. But if a new government-run plan tries the same trick, it will have trouble attracting providers and therefore patients. If it pays the same rates as private insurers, on the other hand, it will lose that big competitive edge.

Fortunately for disciples of government expansion, the "public option" insurance has other advantages. Obama insists it will have to cover all its costs. Oh, really? When Medicare Part B (which pays doctor bills) was set up in 1966, premiums paid by retirees were supposed to cover 50 percent of its outlays. Instead, Congress limited rate increases so that before long, premiums were covering just 25 percent of the bills, a practice later written into law.

If the Washington-run plan charges too little to pay its expenses, will it raise rates, thus antagonizing what could be a sizable group of voters? Or will Congress cough up the money to keep it going? You know the answer.

In the end, the key to the success of this program, writes Cato Institute analyst Michael Cannon, is that "government possesses both the power to hide its true costs (which keeps its premiums artificially low) and to impose costs on its competitors (which unnecessarily pushes private insurance premiums higher)." Private insurers will be "competing" against a team that gets to write the rules, run the draft and hire the referees.

With those artificial advantages, the public option could eventually become the only option. If that happens, a lot of Americans will be surprised. But I suspect Harry Reid and Barack Obama will not be among them.