Race and the Opposition to Obama 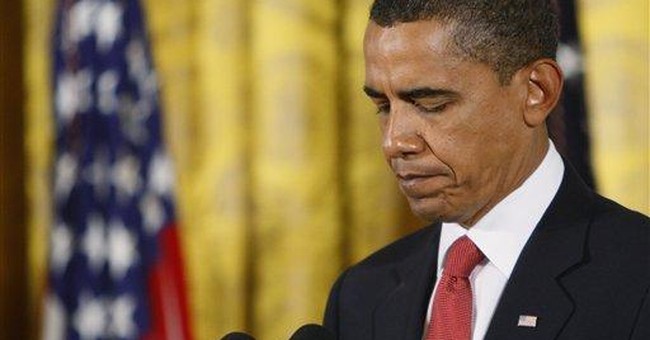 A new president, pursuing policies well within the political mainstream, evokes weirdly angry and intense denunciations from opponents -- a reaction hard to explain in terms of anything he has actually done. Does that suggest, as Jimmy Carter insists, that their true motivation lies in racism?

No, it doesn't, because I'm not talking about Barack Obama. I'm talking about George W. Bush and Bill Clinton -- both of whom, from the day they took office, managed to convince a minority of Americans that they were not just wrong but illegitimate, dangerous and thoroughly evil. Obama's troubles are not exactly unprecedented.

It's generally forgotten that on Inauguration Day in 2001, Bush was greeted by thousands of protesters who threw eggs and bottles, made obscene gestures and carried signs jeering, "Hail to the thief" -- a reference to the legal fight needed to settle the outcome of the election. To the protesters, he was a corrupt enemy of democracy.

Clinton fared no better. He was reviled as a skirt-chasing, America-hating draft dodger. Eventually, he handed his antagonists the opportunity to impeach him, in one of the bitterest episodes in American political history.

What Obama may not have recognized before he arrived in the White House is that hating presidents is an irrepressible American tradition. The haters hung George Washington in effigy. They called Abraham Lincoln a dictator. They said Franklin Roosevelt was a Bolshevik.

Dwight Eisenhower's enemies suggested he was a "conscious, dedicated agent of the Communist conspiracy." Shortly before John Kennedy arrived in Dallas in November 1963, where he was assassinated, an ad ran in the local newspaper with his picture over the legend, "Wanted for Treason."

Looking back, all these claims seem bizarre and unwarranted. But that didn't count for much at the time. The furious denunciations against Obama are simply the latest installment in a custom that seems to have gotten more extreme as methods of instant communication have spread.

So you don't need to turn to race to explain the virulent animosity against Obama. What all the presidents who previously endured irresponsible slander had in common, after all, is that they were white.

Clinton's experience suggests that merely being a Democrat is enough to evoke hysteria in some quarters. In matters of policy, he was about as congenial as any conservative could have hoped -- cooperating with Republicans to balance the budget, advancing free trade, rejecting an international treaty banning land mines, signing welfare reform and threatening to bomb North Korea over its nuclear program. Yet even today, many on the right regard him as an extreme liberal.

Obama has yet to do anything comparable to what Clinton did in appropriating conservative themes, thus confirming fears that he is more liberal than he let on last year. To the contrary, he has championed a huge fiscal stimulus, taken over General Motors, pushed a cap-and-trade program for greenhouse gases and proposed that the federal government run a new health insurance program to compete with the private sector.

So it doesn't require wholesale fabrications to find evidence that he is a committed socialist. It just takes a little imagination and a little paranoia, which have never been scarce on either end of the American political spectrum.

The context also matters a lot. Obama took office during a recession that was the scariest economic crisis in decades -- which under his predecessor had induced some of the most drastic and expansive government initiatives in our history. He took over in the middle of two wars. And he represented a shift on cultural issues like gay rights and affirmative action.

Does that mean the ferocious criticism has nothing to do with race? Of course not. Obama may be a "post-racial" figure, but there is still a significant slice of the electorate that has never gotten past his skin color.

For anyone who regards blacks as irredeemably alien or inferior, Obama is a nightmare, not just because he is black but because he so thoroughly confounds racist stereotypes.

But that's a minor factor, not a decisive one. It is Obama's party and policies that are the real source of the opposition. If you think otherwise, consider how calmly and congenially the right would have responded if a different Democrat had been inaugurated on Jan. 20: Al Gore.