The Revenge of Ross Perot 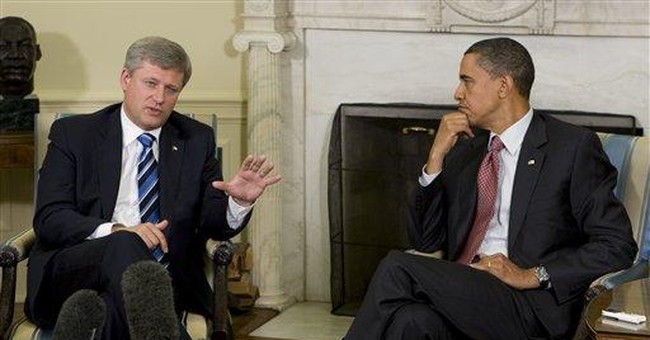 For years, I've been wishing for another Ross Perot -- a leader who would awaken the American people to the dangers of living beyond our national means through huge federal budget deficits. Now, at last, we have that leader. His name is Barack Obama.

Perot ran for president in 1992 as a third-party candidate, and an unlikely Pied Piper he was -- a short, crew-cut scold with a thick twang and a cranky manner who proposed to raise taxes. But his complaints about Washington's chronic overspending struck a chord with the public. A few months before the election, he was leading both incumbent George H.W. Bush and challenger Bill Clinton in the polls.

Only his bizarre decision to withdraw (because, he claimed, the Bush campaign had a sinister plot to sabotage his daughter's wedding) popped the balloon. But after re-entering the race, brandishing charts and graphs in wonky half-hour infomercials, Perot managed to win 19 percent of the popular vote, one of the best showings ever by a third-party candidate.

His candidacy was not for nothing. It created a new awareness of a risky fiscal policy that, in Perot's words, was "robbing future generations." It caused Americans to consider whether fiscal indiscipline was defensible on either economic or moral terms. And it sowed the legitimate fear that deficits would be fatal to prosperity.

In the following years, Republicans and Democrats were forced to attack the deficit -- so much so that by the late 1990s, the government was running surpluses that no one had ever imagined. In January 2001, the month George W. Bush was sworn in, the Congressional Budget Office projected that over the next decade, the government would pile up $5.6 trillion in surpluses.

Alas, it didn't work out that way. A 2001 recession, two unforeseen wars and tax cuts put the federal government deep in the red. Politicians suddenly found plenty of excuses to abandon fiscal responsibility.

Both parties tacitly agreed to ignore the deficit in favor of their own priorities, which involved spending far more money than they were willing to ask taxpayers to provide. Instead of surpluses, we got deficits totaling more than $2 trillion between 2002 and 2008.

Those years now look like a model of budgetary restraint. In the 2009 fiscal year, the gap soared to an estimated $1.6 trillion -- the biggest deficit, as a share of the economy, since America was saving the world from Hitler. And the Perotistas of 1992 have given way to the tea partiers of 2009.

Most of the federal budget shortfall was the result of events that happened and policies that were implemented under the last president. Obama didn't triple the deficit; Bush did. But the anger and fear have been directed at his successor.

Obama's expensive ambitions have brought the issue back to center stage. He vows to cut the deficit in half. But under his budget blueprint, the government would accumulate some $7 trillion in new debt over the next decade.

Already, he is paying a political price for that stance. In March, most Americans approved of how he was handling the deficit. Today, most disapprove. His overall popularity has fallen as well.

Obama's fateful choice was the $787 billion stimulus package. Enacted in the depths of a recession in a desperate attempt to revive the economy, it soon spawned buyer's remorse. Coming after the 2008 stimulus package, bank rescue program and automaker bailout -- steps toward "socialism" taken by a Republican president -- it created the specter of the government as Incredible Hulk, rampaging out of control.

Maybe it's unfair for Obama to get the blame for that calamity. But by blithely adding to the problem, he validated the darkest predictions of his critics.

He also impeded his own fondest hope -- health care reform. Obama has long insisted that his plans were essential to getting control of spending. But given the ever-rising cost of Medicare and Medicaid, the claim sounds inherently bogus.

Maya MacGuineas, head of the Committee for a Responsible Federal Budget, notes another cause for dismay. After promising that health care reform would reduce the deficit, Obama now says only that it will not increase it. If it won't do any budgetary harm, it also won't do any good.

At this point, not making the problem worse may not appease a public worried that he and Congress are waltzing toward national bankruptcy. Obama, unlike Perot, didn't intend to make Americans care about the federal deficit. But now he may find it hard to get them to think about anything else.