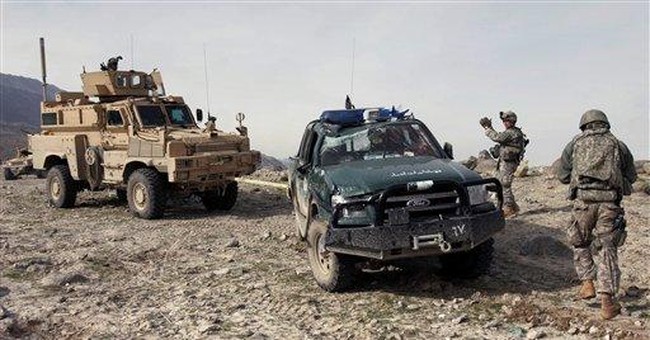 Some countries exist for no apparent reason, but not Afghanistan. Its function in the world has long been clear: to show great powers the limits of their power.

First it was the British, who in 1842, at the height of empire, were defeated and expelled. The Soviets invaded in 1979, only to encounter a fierce insurgency that forced their withdrawal. Now it's America's turn to marvel at Afghanistan's immunity to outside control.

Afghanistan was once among our sterling military successes -- a war, predicted by skeptics to be a certain quagmire, that produced a swift and stunning victory. The triumph came in 2001, in the aftermath of the Sept. 11 terrorist attacks mounted by al-Qaida, which had enjoyed a safe haven in this corner of South Asia.

But that was a long time ago, and the longer we stay, the worse things get. 2007, the deadliest year of the war for the American military, gave way to an even bloodier year 2008. Extremist attacks are on the rise, and the Taliban now has "a permanent presence in 72 percent of Afghanistan, up from 54 percent a year ago," says a report by the International Council on Security and Development.

Adm. Mike Mullen, chairman of the Joint Chiefs of Staff, has predicted things will get worse this year. President Hamid Karzai's government is widely seen as weak and corrupt. And, not least important, Osama bin Laden is still at large and issuing taped calls for jihad.

President Obama has pledged to give new priority to Afghanistan, with plans to send up to 30,000 more troops, which would double our numbers there. But his administration "does not anticipate that the Iraq-like 'surge' of forces will significantly change the direction" of the war, according to The Washington Post. The point is to buy time to formulate a new strategy, which currently qualifies as a failure.

The change of heart appears to be based on the reality that we can't remake the country without a much bigger and more costly commitment that would mire us in Afghanistan for years to come -- and still might not succeed. Lately, the Pentagon has been defining success down, without the world-saving rhetoric of the Bush administration.

A classified report from the Joint Chiefs of Staff has recommended that the president shift the focus from nation-building to destroying Taliban and al-Qaida targets in Pakistan. Defense Secretary Robert Gates recently said that "our primary goal is to prevent Afghanistan from being used as a base for terrorists and extremists to attack the United States" -- not "creating some sort of Central Asian Valhalla."

Unlike Iraq, Afghanistan was a war we had to fight, and one that served vital national interests: punishing enemies who attacked us on American soil and making sure they couldn't do it again. The original invasion accomplished the first mission and went a long way toward the second. But once Bush turned his attention to Saddam Hussein, he let the Afghan war become an afterthought, lacking sufficient resources and a clear policy.

So what should the policy be? The one identified by Gates and the Joint Chiefs. It makes no difference to our security if Afghanistan is a republic, a monarchy or a theocracy -- as long as it is not a haven for Islamic radicals bent on our annihilation. That's lucky, since there is no reason to think we have the wisdom or the patience to mold the country into anything resembling a prosperous democracy.

Our main power is military, but it has been unable to realize our outsized ambitions. The obvious next step is to try to peel various Taliban factions away from Bin Laden and Co. by offering them a share of power if they give up the fight. Under that approach, we could concentrate our energies on wiping out terrorist camps along the Pakistan border. It also holds the promise of letting us leave in the not-too-distant future without undue risk.

Does it sound like appeasement? Only to those who forget a big key to our recent progress in Iraq -- essentially paying Sunni militias, our onetime enemies, to abandon al-Qaida in Iraq and join with us.

It may be a disappointment to settle for what is merely vital in Afghanistan after the heady days of the early war. But expanding our mission invites disaster, which is worse than disappointment.