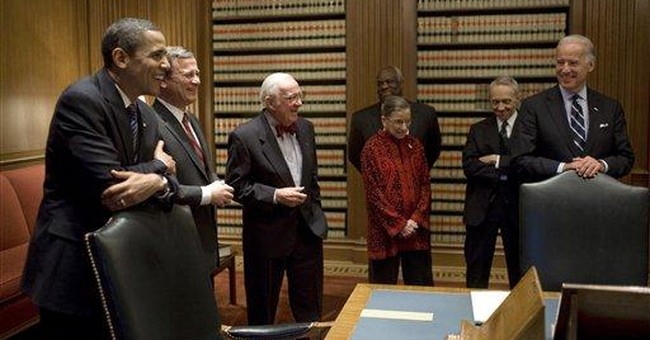 One reality of 21st-century religion is that many people treat the Ten Commandments as the Ten Suggestions, to be modified or ignored without penalty. That same spirit has infected the Supreme Court, which last week contemplated an abuse of the Bill of Rights, rolled its eyes and said: Oh, what's the big deal?

Bennie Dean Herring had gone to a sheriff's impoundment lot in Coffee County, Ala., to get some things out of his truck. A suspicious investigator checked with officials of a neighboring county to see if the ex-convict had any outstanding arrest warrants and was told he did. The investigator arrested Herring and found him in illegal possession of drugs and a gun.

But it turned out there was a problem with the arrest warrant. It had been canceled months before but was never deleted from the database. So when Herring was indicted on drug and weapon charges, his lawyer asked for the evidence to be thrown out because it came from an arrest that the sheriff had no right to make.

When presented with these facts, the Supreme Court reached two conclusions. The first was that everyone agreed the cops had violated Herring's rights. The second was that it was his tough luck. Never mind the Fourth Amendment, which forbids unreasonable searches and seizures -- he's guilty and he's going to jail.

This decision creates a new exception to the exclusionary rule, which bars evidence police obtain through an illegal search. The prohibition was meant to foster respect for constitutional requirements by giving law enforcement agents a disincentive to violate them. But Chief Justice John Roberts and four of his colleagues are happy to excuse some violations.

The exclusionary rule, said the court, "serves to deter deliberate, reckless or grossly negligent conduct, or in some circumstances recurring or systemic negligence. The error in this case does not rise to that level." On the contrary, wrote Roberts, it was but a trifle, "the result of isolated negligence."

Rights need constitutional protection because governments have a tendency to ignore them. But it takes more than a parchment dictate to force the authorities to do what they are supposed to do. It takes penalties that make violations painful to the violator.

That's where the exclusionary rule comes in. Police face constant temptations to break the rules to nab villains and put them in jail. But this rule goes far to discourage them. Violate a criminal's rights, and he may go unpunished.

That wasn't always the case. In the old days, cops paid little attention to the Fourth Amendment because they had nothing to gain by respecting it. Only when they had to pay a price for overstepping did they develop a sudden interest in staying on the right side of the constitutional line -- to the benefit of the innocent as well as the guilty. Wonder of wonders, police departments actually began training officers in how to comply with the Fourth Amendment.

After the Supreme Court imposed the rule on states and cities in 1961, New York's deputy police commissioner acknowledged as much. "Before this, nobody bothered to take out search warrants," he said. "[T]he feeling was, why bother?"

Anyone in charge of maintaining databases of arrest warrants may now be asking the same question. In fact, the court's decision creates an incentive for poor record-keeping. If Herring's warrant had been purged promptly, after all, he could not have been searched, and he would have gotten away with his offenses.

That may seem too high a price to pay. But the real objection is not to the exclusionary rule -- it's to the Fourth Amendment, since if his rights had not been violated, he would have gone free. The tradeoff between catching criminals and protecting privacy is not a daffy invention of activist liberal judges. It was the framers' whole point.

But the Supreme Court says it's fine for the government to profit when it deprives citizens of their constitutional rights through incompetence or sloth. That's like telling teenagers it's OK to get pregnant, as long as it's not on purpose.