A Well-Earned Impeachment, At Last 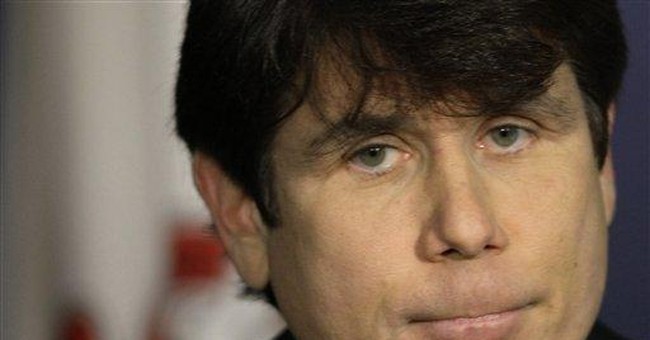 In 1776, the authors of the Declaration of Independence noted that "governments long established should not be changed for light and transient causes; and accordingly all experience hath shewn that mankind are more disposed to suffer, while evils are sufferable, than to right themselves." But Illinoisans know, as those patriots did, that at some point you just can't take it anymore.

For most, that point came after Gov. Rod Blagojevich got himself arrested in December on charges of soliciting bribes. It took less than a month for the House to vote to impeach him. The real mystery is not that people became completely disgusted with the governor so suddenly, but that the process took so long.

His conduct over six years in office suggests that his only goal was to see how far he could push his luck before it ran out. Or else to prove journalist H.L. Mencken's claim that "government is a broker in pillage, and every election is sort of an advance auction sale of stolen goods."

The House vote set the stage for the Senate trial to decide on his removal. As it happens, neither the House nor the Senate needs any reason to act. The U.S. Constitution provides for impeachment and removal in cases of "treason, bribery, or other high crimes and misdemeanors." The Illinois Constitution, by contrast, provides for it in any instance where the General Assembly feels the urge. Legislators could eject Blagojevich because they detest his hair, and who could blame them?

But to their credit, lawmakers have never been disposed to resort to impeachment just to get rid of someone whose personality or policies they find obnoxious. They treat it as a last resort, to be used only for the most intolerable behavior.

In the case of Blagojevich, that gave them plenty to choose from. From wiretapped conversations, federal law enforcement agents concluded he schemed to trade a U.S. Senate appointment for lucrative favors, tried to coerce the owner of The Chicago Tribune to fire his editorial board and demanded a campaign contribution from an executive at a children's hospital that was hoping to get state reimbursement for pediatric care.

Amid all these revelations, you could almost forget that Blagojevich had been practically begging to be evicted for years. During the bribery trial of Chicago developer Tony Rezko, there was testimony he traded state contracts for campaign cash. He tried to import flu vaccines and prescription drugs in defiance of federal law. He expanded a state health care plan without any legal basis. And along the way, he did just about everything possible to make a buffoon of himself.

But his earlier sins were only proof of how hard it is to get oneself removed from office. In all of the republic's political history, only seven governors have ever been impeached and convicted. Americans are often disappointed with the performance of those they elect. But as a rule, citizens seem to think that if they were foolish enough to install a clown or a crook, they deserve to suffer the consequences.

In this case, the voters of 2002 could be excused for assuming any Democrat would be an improvement on Republican incumbent George Ryan, whose own envelopment in scandal dissuaded him from running again. Blagojevich -- I am not making this up -- got elected on promises of reform. As a Chicago Tribune story put it during his first gubernatorial campaign, his main theme was "a promise to overhaul the scandalous culture of Springfield and install new leadership imbued with hope, idealism and, of course, opportunity." Ha. Ha. Ha.

By 2006, people didn't expect that from Blagojevich anymore than they expected palm trees to sprout on Michigan Avenue. But thanks to great piles of campaign cash, weak opponents and widespread despair at ever achieving good government in this state, he was able to win re-election. Like many a politician, the governor benefited from his talent for fostering cynicism.

The victory, however, seems to have fed his own worst instincts. After being forced to resign as governor of Connecticut in 2004 and serving time in prison, John Rowland reflected that what brought him down was a "sense of entitlement" and the "arrogance of power." He's not the last politician to display those flaws -- or to learn that the public's patience is almost unlimited, but not quite.