Steve Chapman  |  Dec 25, 2008
The opinions expressed by columnists are their own and do not necessarily represent the views of Townhall.com.
Top Columns
Trending on Townhall Media 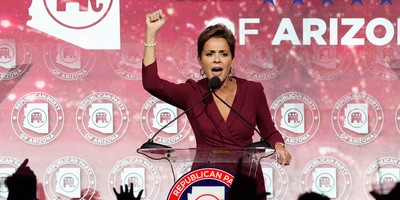 When President George W. Bush had to duck a pair of shoes thrown at him by an irate Iraqi journalist at a news conference in Baghdad, the depressing part was not just that his administration has managed to alienate many Iraqis. It was also that the president of the United States had to go to Iraq to find himself face to face with anyone who openly rejects his policies.

Here in the land of the free, that is almost unheard of. When Bush ventures into contact with ordinary Americans outside the White House, his aides do their best to keep him from realizing that many of his constituents regard him as a disaster.

It's explicit administration policy, in fact, to keep any expression of discontent from becoming visible to the Great Leader. You don't have to chuck a Rockport to be forcibly exiled from his presence.

Jeffrey and Nicole Rank can attest to that. Four years ago, Bush gave a Fourth of July speech on the grounds of the West Virginia state capitol in Charleston. It was open to the public, and they got tickets to attend. But after being admitted, they took off their outer shirts to display T-shirts with a red circle and a bar over the word "Bush." On the back, Nicole's shirt urged, "Love America, Hate Bush," while her husband's said, "Regime Change Begins at Home."

As soon as these unapproved messages were spotted, workers told them to cover up or leave. Jeffrey Rank said later, "We tried to explain to them that it was well within our right to stand there and wear these T-shirts, just as people around us had the right to wear pro-Bush and Cheney T-shirts." But the cops, showing no interested in inconveniences like freedom of speech, handcuffed and arrested them for trespassing.

This was not an isolated incident. When Bush went to Denver to speak on Social Security at another taxpayer-financed public event, Leslie Weise and Alex Young got their tickets and drove to the museum where Bush would appear. But a Republican operative noticed their car bore a bumper sticker recommending "No More Blood for Oil" and apparently took it as a criticism of Bush.

After they had taken their seats inside, two presidential staffers showed up and unceremoniously escorted them out. Weise and Young say Secret Service agents later told them they were ejected purely because of that bumper sticker.

The American Civil Liberties Union took both of these cases, and during litigation, managed to get a White House document that shows squashing dissent is standard operating procedure. "Proper ticket distribution is vital to creating a well-balanced crowd and deterring potential protesters from attending events," the President Advance Manual says. "Well-balanced" in this context means including not only who like President Bush but people who love him.

No one objects to efforts to avert disruptions that threaten violence or keep the president from speaking. But White House staffers show control-freak tendencies that go beyond assuring security. The manual says that if someone merely displays a sign, "action needs to be taken (set ital) immediately (end ital) to minimize the demonstrator's effect."

What effect would that be? Showing that someone disagrees with George W. Bush -- an effect that can't be tolerated. That's why Bush critics have to be removed even if they are quiet and non-disruptive.

It's not enough to keep opponents out of his audiences. The manual also calls for keeping all external protests out of sight. It advises advance workers to get "the local police department to designate a protest area where demonstrators can be placed, (set ital) preferably not in view of the event site or the motorcade route" (end ital). What kind of country would we be if we made the president endure the spectacle of citizens questioning his infallibility?

The ACLU is challenging these tactics in court, and it's already won a victory. The federal government agreed to pay Nicole and Jeff Rank $80,000 for what was done to them, and Charleston city officials apologized.

This comes too late to penetrate the barricades that have surrounded President Bush. But maybe President-elect Barack Obama will take a different approach and accept that occasionally seeing people express dissenting views is just part of the president's job. And not just on visits to Baghdad.