Caroline and the Lure of Royalty 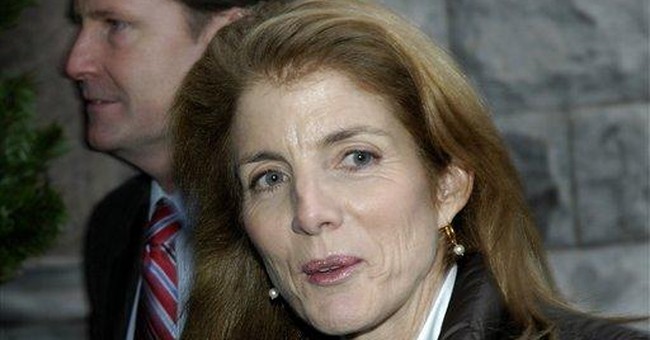 If New York Gov. David Paterson wants to appoint a senator distinguished by global star appeal, a long family tradition of public service, royal bloodlines and obvious availability, it's easy to think of the perfect candidate. Caroline Kennedy? That's setting his sights too low. If I were him, I'd put in a call to the Prince of Wales.

Really, what assets does Jack Kennedy's daughter have that the son of Elizabeth II doesn't? Both owe their prominence entirely to their ancestry. Both are immensely rich thanks to the sacrifices and achievements of people who went before.

Both have often represented their families at the funerals of prominent people. Neither has ever had to stress about finding a job, meeting a payroll or keeping government functions going during a budget crisis.

And here's the most newsworthy similarity: Both expect to attain a high office without the bother of having to submit themselves to the voters. And both will probably get their way.

Kennedy is a well-spoken, pleasant woman who is indistinguishable from many other rich folks who would never be considered for a seat in the nation's highest elected body. Indistinguishable, that is, except for her name, which in some minds confers magical powers denied to ordinary mortals.

If she had been born Caroline Kelly, no one would indulge her expressed desire to become a United States senator. But because of her pedigree, Paterson appears to think she's doing him a favor instead of the other way around.

Kennedy is the latest example of the rise of "branding" in American politics -- in which merely coming from a particular family is taken as a qualification for office. For most of his life, George W. Bush was famous mostly for his meager accomplishments. But because his father was president, he was able to get himself elected governor of Texas and then president as well.

A lot of people assumed he would have some of his father's better traits: a habit of hiring smart people, a measure of humility and the good judgment not to occupy Iraq. Instead, the younger Bush seemed to spend his presidency trying to show how different he was from the old man. Mission accomplished.

That experience should prove that political brands are not comparable to automobile brands. If you buy one model of Toyota rather than another, you can be confident it will live up to the maker's reputation for quality and durability. But just because a family produced a president and a couple of senators, all reasonably well-regarded, doesn't mean other members of the clan will do well.

In the Kennedy case, of course, not everyone would agree that Caroline's Uncle Ted has been a boon to the nation during his years in the Senate -- quite the contrary, since he has long been one of the most liberal lawmakers on Capitol Hill. That's without even taking into consideration the minor matter of Mary Jo Kopechne, the young woman he killed in a mysterious car wreck in 1969.

Other Kennedys have fallen short in office. Joe Kennedy, son of Robert, was known as a telegenic lightweight during his time in the House of Representatives. Rep. Patrick Kennedy (D-R.I.), son of Ted, has made news mostly with his drug use and traffic accidents. Kathleen Kennedy Townsend, daughter of Robert, was elected lieutenant governor of Maryland, but in 2002 managed the feat of becoming the first Democrat in more than three decades to lose a governor's race in that state.

So what kind of Kennedy would Caroline be? Beats me. One way to find out would be to let her run for some entry-level office where she could learn the trade and make her quota of beginner mistakes without doing much harm. But she apparently feels no obligation to show she's up to the job before taking the oath.

You could say the same about her predecessor, Hillary Clinton, who had never held elective office before. But Clinton at least gave the citizens of New York the chance to assess her qualifications before ascending. Kennedy sees no need for such tedium.

Under the customs of hereditary monarchy, her appointment would make perfect sense. But if New York prefers that method, it might as well go with the real thing. Last I checked, Prince Charles didn't have any better offers.