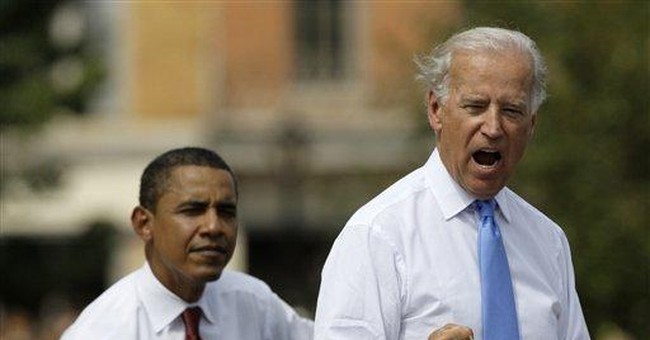 Joe Biden once got in trouble for plagiarizing a speech and inflating his academic record. So it will not surprise you to find that his famous working-class background turns out to be mythical. But it may surprise you to learn that Biden isn't the one who has trouble with the facts.

In his Wednesday night speech at the Democratic convention, Biden referred to "those of us who grew up in middle-class neighborhoods like Scranton and Wilmington." In the video preceding his address, he said that the people he knew as a boy didn't regard themselves as working class but as middle class.

So what did the news media report? "Sen. Joseph R. Biden accepted the vice presidential nomination of the Democratic Party with a speech that harkened back to his working-class roots in Scranton," said The Washington Post. The Wall Street Journal informed readers that "Sen. Joe Biden showcased his working-class upbringing." The New York Times said he "spoke frequently, and earnestly, of his blue-collar background."

No, he didn't. In fact, he did just the opposite. Anyone paying attention would have noticed as much. But the legend of Joe Biden, born in a welding shop, dies hard with political reporters, who find it easier to romanticize a gritty, hardscrabble childhood than a conventionally comfortable one.

The facts are there for anyone who wants to look at them. When Joe Biden Sr. died in 2002, his obituary in the News-Journal of Wilmington reported that when he married in 1941, "he was working as a sales representative for Amoco Oil Co. in Harrisburg."

It went on, "Biden also was an executive in a Boston-based company that supplied waterproof sealant for U.S. merchant marine ships built during World War II. After the war, he co-owned an airport and crop-dusting service on Long Island." Upon moving his family to Delaware, the News-Journal said, Biden "worked in the state first as a sales manager for auto dealerships and later in real-estate condominium sales."

Executive, co-owner and manager? Those titles identify the jobholder as solidly middle class, if not better. They fall in the category of white-collar occupations, not blue-collar.

And Biden Sr. clearly knew the difference. In his book, "Promises to Keep," Biden writes that his father was "the most elegantly dressed, perfectly manicured, perfectly tailored car sales manager Wilmington, Del., had ever seen."

Biden notes that he himself could have gone to the best public high school in Delaware. Instead, he enrolled at Archmere Academy, a Catholic prep school that made him think he had "died and gone to Yale." He took a summer job to help pay the steep tuition, which today amounts to $18,450 a year.

That doesn't mean the Bidens never had financial trouble. Biden says they had to move in with his mother's parents after one setback, and he remembers "when the electric company would send a collector to the house."

For nearly a year, the father was reduced to cleaning boilers for a heating company. But middle-class people are not immune to unemployment and bad business deals, and the Bidens regained their footing before long.

So where did he get his working-class reputation? Partly it comes from Biden's streetwise demeanor and his preoccupation with the fact that his family wasn't as well-off as some of the people he knew -- which seems to have given him a permanent chip on his shoulder. Partly it comes from his frequent tributes to blue-collar folks, such as the firefighters who took him to the hospital when he suffered an aneurysm.

The errors about Biden bring to mind the recent satirical report from humorist Andy Borowitz: "A member of the U.S. Olympic diving team was disqualified from competition today when it was learned that he did not have a sufficiently compelling human story line to exploit on the NBC telecast of the worldwide sporting event."

Biden just didn't have a sufficiently compelling human story line for a presidential campaign. Luckily, he does now.