States Fight Back Against Biden War on the West

Stephen Moore
|
Posted: Apr 06, 2021 12:01 AM
Share   Tweet
The opinions expressed by columnists are their own and do not necessarily represent the views of Townhall.com. 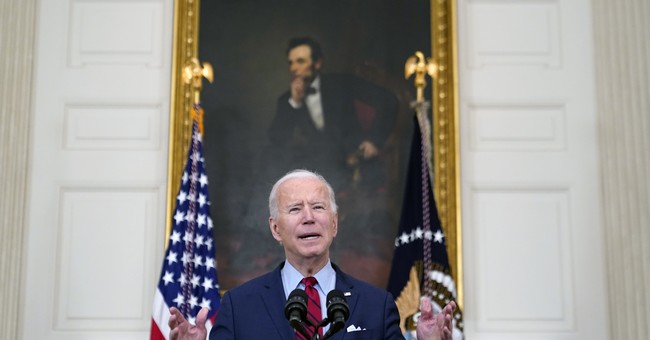 That may seem to be an inconsequential grammatical difference, but a whole different philosophy of our system of government is embedded in that phraseology. Reagan reinforced the traditional notion of American federalism: that the states created the federal government, not the other way around.

The states are to serve as "laboratories of democracy." Our Founding Fathers' ingeniousness was recognizing that healthy competition among the states was the best way to devise policy solutions.

This brings us to President Joe Biden. No president in modern times, perhaps ever, has shown such contempt for our system of federalism.

So I was thrilled to see this headline from, of all places, Alaska: "Dunleavy Tells Feds Alaska Is Taking Over Management of 800,000 Miles of River."

Alaska is asserting its right as a state to control its lakes and rivers. Gov. Mike Dunleavy is so fed up, and he has asked the Biden administration to "stop bothering Alaskans."

We need governors and state lawmakers to show much more of this peaceful defiance when Washington oversteps. That's happening a lot lately. Biden has declared no more drilling on federal lands in the West, and this federal directive will cost these states potentially trillions of dollars. The authorities are also planning to take millions of acres of land in the West out of development.

The Biden team wants to overturn state right-to-work laws that have been a half-centurylong tradition in most Western states. The Treasury Department has even now asserted authority to intervene and stop states, such as Nebraska, South Dakota, Utah and Montana, from cutting taxes in their states. Simultaneously, wealthy coastal states are looking to eliminate the state and local tax deduction limits included in former President Donald Trump's 2017 tax package. The current limit is $10,000, and eliminating it would likely favor wealthier, liberal taxpayers whom Democrats always say do not pay "their fair share." The Biden administration might want to urge New York and California to ease the tax burdens in those states instead of taking it out on Western states.

Westerners are rightly infuriated that members of Congress from Delaware, New York and Massachusetts, who have little or no knowledge about how to manage resources, are telling the farmers, miners and ranchers in places like Colorado, Montana and Utah what they can do with their own property.

Twenty-one state attorneys general in primarily Mountain and Southern states are suing Washington for blocking their prerogative to run their own fiscal policies.

They say that Biden is violating the 10th Amendment, which ensures that all rights not explicitly granted to the federal government "reside with the states and the people."

For the future of our republic, let's pray that the courts agree.