Stephen Moore
|
Posted: Apr 21, 2020 12:01 AM
Share   Tweet
The opinions expressed by columnists are their own and do not necessarily represent the views of Townhall.com. 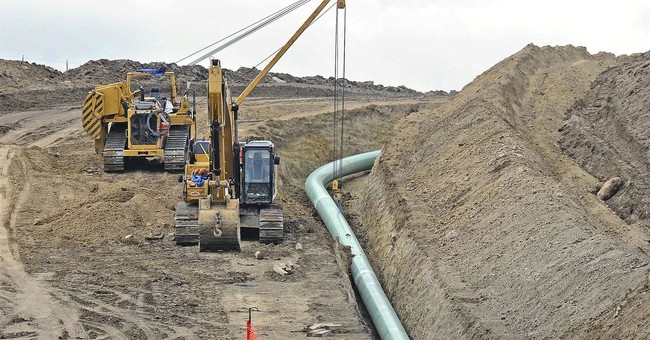 America's domestic energy producers are under siege. The price of oil fell to below $5 a barrel on Monday, down from roughly $50 a barrel a year ago. This 90% drop in price is sending nearly the entire oil and gas industry into bankruptcy.

Saudi Arabia and Russia have flooded the international market with cheap oil at the very time of a massive drop in demand due to the coronavirus pandemic. This "perfect storm" for America's drillers sent prices into this unprecedented tailspin.

Low prices are good news for American motorists and manufacturers, for sure. Get ready for $1 a gallon gas prices in some places. But the market saturation in cheap oil is a scheme by the Saudis to regain the power they lost when innovative U.S. drillers cracked the code to unleash the most prolific and unexpected oil and gas boom in the history of North America.

Because of their grit and determination, and for leading us out of the 2008 to 2009 recession, I love this industry. I wrote a book about the frackers in 2015, and, for full disclosure, I get some limited funding from energy firms. Under President Donald Trump's policies, which were highly supportive of American energy independence, the U.S. became a net exporter of energy, and OPEC's energy dominance was over.

But now, Russia and Saudi Arabia want their price war to shut down American energy production while the world isn't looking. They are succeeding.

Many small- and medium-sized producers, from Texas to North Dakota and Pennsylvania, have been shutting down and are even fighting off bankruptcy. These companies are amazingly resilient and are experts at slashing production costs for the sake of survival. Almost no one (other than radical environmentalists) favors decapitating an industry that has made America an energy powerhouse, created as many as 5 million new jobs, and almost single-handedly pulled our nation out of the 2008 to 2009 recession.

Oil remains one of the necessary elements in society's ability to prosper and function. For example, the blue-collar jobs in oil production, transportation, refining, and petrochemical manufacturing were all deemed "essential workforce" (even in California!) during this period of national emergency. It would be dangerous and shortsighted to hand over energy production to foreign regimes that are less than friendly to the U.S. and have proven themselves to be less than dependable suppliers.

One smart retaliatory move would be to slash the taxes paid by our onshore drillers and royalties on drillers in the Gulf of Mexico and on federal lands. These royalties paid to Uncle Sam can range from a "tax" of between 12% and 18.5%. Ending the royalties through the end of the year would lift the after-tax price paid to drillers by as much as $5 a barrel. This would apply to about 4 million barrels of oil per day on federal properties.

The feds now collect about $6 billion a year in royalties. Canceling those payments would be a small price to pay to save an industry that employs several million workers. Under federal law, the president has the executive authority to take this action.

America has become the world's largest oil and gas producer -- and the Russians and the Saudis want to end that supremacy. Trump can and should make sure they don't succeed by slashing the taxes and royalties this critical industry pays until the coronavirus crisis is over.