Dig a Hole for US Coal

Stephen Moore
|
Posted: Apr 19, 2016 12:01 AM
Share   Tweet
The opinions expressed by columnists are their own and do not necessarily represent the views of Townhall.com. 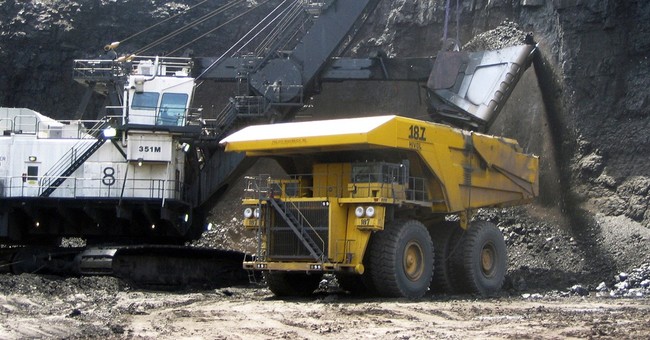 There was a time in America -- and it wasn't even so long ago -- that liberals cared a lot about working-class people. They may have been misguided in many of their policy solutions -- e.g., raising the minimum wage -- but at least their hearts were in the right place.

Then a strange thing happened about a decade ago. Radical environmentalists took control of the Democratic Party. These leftists care more about the supposed rise of the oceans than the financial survival of the middle class. The industrial unions made a catastrophic decision to get in bed with these radicals, and now they -- and all of us -- are paying a heavy price.

The latest evidence came last week when another coal giant in America, Peabody Energy Corp., filed for bankruptcy. This is the same fate suffered by Arch Coal Inc., Alpha Natural Resources Inc. and other coal producers that have filed for Chapter 11 protection from creditors.

This isn't a result of free-market creative destruction. This was a policy strategy by the White House and green groups.

They wanted this to happen. This was what Clean Power Plant rules from the Environmental Protection Agency were all about. The EPA set standards that by design were impossible to meet and even flouted the law that says the regulations should be "commercially achievable." This was a key component of the climate change fanaticism that pervades this White House.

Ideas have consequences. Obama has succeeded in decimating whole towns dependent on coal -- in Wyoming, Virginia, Pennsylvania and Illinois. Hillary Clinton recently vowed to put all of coal out of business. This is how you win a Democratic primary these days. What kind of political party dedicates itself to destroying an entire domestic industry?

No one in the "progressive" Democratic Party seems to care that an estimated 31,000 coal miners, truckers, engineers, construction workers and others have lost their jobs since 2009 as a result of this fanaticism. Another 5,000 or so could be given pink slips at Peabody. To the left, the families whose lives are ruined are collateral damage to achieve their Utopian dream of saving the planet. The people who now run the Democratic Party believe the ends justify the ruthless means.

Investors have gotten crushed, too, as a result of coal's demise. The coal industry has lost more than $30 billion in stock value since 2009, with many of these losses showing up in union pension funds and private 401(k) plans.

What is maddening about all of this is that coal is much cleaner than ever before. EPA statistics show that emissions of sulfur, lead, carbon monoxide and smog from coal plants have been reduced by 50 percent to 90 percent in the past 40 years. The air we breathe is cleaner than ever. Carbon dioxide, by the way, is not pollution: It doesn't make you sick.

Clean coal is a reality, but that fact never slowed the greens down. The Natural Resources Defense Council now wants the EPA to slap $700 million in environmental fines on Peabody. These people just never stop.

Global warming advocates should ask themselves what they are accomplishing. For every coal plant we shut down, China and India build another 10 or so. Donald Trump is right: The rest of the world really is laughing behind our backs at our economic suicide pact.

Our coal is much cleaner, and our environmental laws much stricter, than China's and India's, so this shift of output and jobs from the U.S. to our rivals succeeds in making us poorer and the planet dirtier.

America is the Saudi Arabia of coal; we have an estimated 500 years' supply. So for economic and ecological reasons, we should want American coal to dominate the world market. But the environmentalists' rallying cry is: "Keep it in the ground."

Do liberals care that the demise of coal could lead to major disruptions in America's electric power supply? Coal still supplies more than one-third of our electricity, because it is cheap and highly reliable -- much more so than wind and solar energy.

America was built on coal. Kathleen Hartnett-White, an energy expert at the Texas Public Policy Foundation, notes that the Industrial Revolution "was made possible because of coal and other fossil fuels that replaced green energy like windmills."

Perhaps the millennials will realize their mistake when they won't be able to power up their PlayStations, iPhones and laptops.

Republicans in Congress aren't blameless here. They have controlled the House for five years and both chambers since 2015, but they have sat by while the EPA destroys an iconic American industry. Why has Congress not overruled EPA rules on carbon -- which, again, is not a pollutant? Every poll shows that Americans care most about jobs and the economy -- and only about 3 percent care most about climate change. Yet, they refuse to stand up to Obama and take the side of the American worker.

Republicans should remind coal workers and the union brass every day that the GOP is the party that wants to save this industry, and Democrats are firmly on the side of layoffs and unemployment.