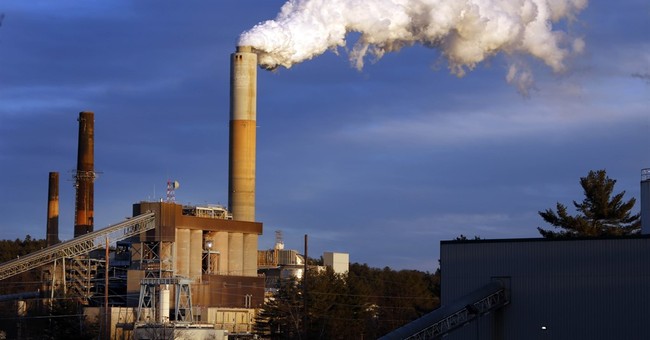 Here's today's political quiz question: What do these five states -- Rhode Island, Connecticut, Vermont, California and Maine -- have in common? Yes, they are blue states ruled by Democrats, but that's not all. These are the states that use the least amount of coal -- 2 percent or less -- for electric power.

In fact, almost all the states that are politically liberal and vote unfailingly Democratic are low coal use states. For instance, Washington, New York, Oregon and New Jersey are also in the top 10 states least reliant on coal. Only conservative Idaho is a red state with low coal consumption.

Obama announced last week the toughest environmental regulations ever against coal. This is part of the president's war on coal that he announced when he was running for president in 2008. He has long admitted these policies, which aim to reduce emissions from coal burning electric power plants by 32 percent from 2005 levels by 2030, will "bankrupt" the coal industry. It's working. Coal towns are being vaporized across America and coal companies are going out of business.

But the pain from the new Environmental Protection Agency rules won't be evenly distributed across America. Far from it. The liberal coastal states will feel relatively modest jobs losses because they rely less on manufacturing. On the other hand, coal-producing states, such as West Virginia and Wyoming, will see massive job losses and increases in electric utility costs. A 2014 study by the Heritage Foundation finds the nationwide costs will be about $100 billion a year eventually, or a reduction in GDP by about one-half a percentage point; additionally, a family of four's annual income will drop by $1,200. Obama's policies that have had such a crushing effect on middle-income family finances are about to get a whole lot worse.

Would Sens. Barbara Boxer of California and Sheldon Whitehouse from Rhode Island, two of the biggest cheerleaders for the new regulations, be so euphoric if their voters were paying these massive costs for their green agenda? But the East- and West-Coast environmentalists can live with raising costs and unemployment in "flyover country."

It's time to label the Obama green policies what they truly are: steep taxes on red state America. By the way, many purple states such as Pennsylvania, Ohio and Virginia also get hammered by Obama's climate change agenda.

The de facto tax that Obama wants to impose on American coal is doubly dastardly because its impact will be felt hardest in relatively poorer states. And because Census Bureau data confirms that poor households spend four times more of their income on energy than rich families, the Obama policy will make income inequality much worse. But of course the upper crust Manhattan liberals, who fund the Sierra Club and Obama and profess to care so much about the poor, can live with that. So much for "environmental justice."

Maybe all of this pain would arguably be worth it if somehow these policies were going to reduce global carbon emissions and stop global warming as Obama assures us they will. They won't. New data from the U.S. Energy Information Administration and other sources tells the opposite tale. China and India are adding coal plants on a massive scale. At least 1,000 new coal plants are planned worldwide.

According to data from the EIA, for every unit of reduction in U.S. coal power capacity from 2011-2040, China and India alone will add more than 14 units. Even if the U.S. cut coal use to zero over the next 25 years, global emissions from coal will rise sharply. By 2040, China's coal power capacity alone will be nearly 4 times the current U.S. capacity. So the Obama plan is all pain and no gain. It would be like trying to reduce unwanted pregnancies in the third world by having Americans use more birth control. Stupid.

But back to the Obama assault on red and purple states. Let's hope the voters get the message that Obama's green energy policies are directed at their jobs and their paychecks. Most people in blue states and the workers around the rest of the world won't feel a thing. This is fair?