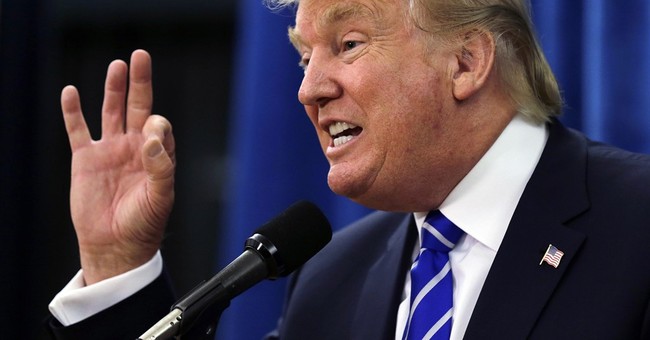 The wind-down of the Summer of 2015 wasn’t supposed to be like this, as least not in the minds of political experts throughout the land. As the “official kickoff” of the 2016 primary season (Do they really have a beginning or an end anymore?) began, the Beltway cognoscenti were hoping for a Bush/Clinton redux, this time featuring the two least interesting politicians from each family.

In short, we were supposed to be more bored than someone halfway through Moby Dick who would probably swear under oath that the book was getting longer the further he got into it.

All of that changed when two guys decided that there was entirely too much combed hair running in both parties.

Donald Trump and Bernie Sanders have energized different portions of the electorate and, to the enduring horror of the more well-heeled political class, neither seems to be going away anytime soon. To the contrary, both are gaining on Her Inevitable Madameship, the Duchess of Sour.

With Trump assuring the American people that chicks dig him, or Sanders shaking an angry fist at Big Deodorant, it is plain to see that this race that was supposed to be political Ambien is now one Biden away from becoming a Crisco-covered Tijuana donkey show.

Uncle Kruiser is here to tell you that it’s not really a bad thing.

Emotions have been running a little...ridiculous for the last few weeks. On the side of the aisle that purports to not want Hillary Clinton in the White House, the internecine social media warfare has been so shrill that monkeys in zoos all over America have ceased flinging you-know-what at each other to stop and watch the human version. Trump supporters accuse anyone not praising him as the last, best combed-over hope for America of being in bed with the Republican Establishment. The GOP consultant class is filled with the only people who talk about Donald Trump more than Donald Trump does, and none of them are willing to admit that his popularity at the moment is largely due to the fact that the GOP proper has been a Mount Everest of noxious failure in Washington. By noon on any given day I can be accused of being in both camps, although there is quite a body of evidence proving that I am decidedly not in either. Emo tantrums are the order of each day, however, and you can just take whatever nuanced position you may have and go back to your Establishment cuck, he’s a cancer in the party, poll numbers, he wants single payer corner and shut it, don’t you know.

While not an enthusiastic Trump supporter (putting it very mildly), I am not willing to give the Republican party a free pass on spawning him. It’s a lot like being too lazy to put oil in your car-after this goes on too long the engine throws a rod, and it’s noisy and expensive to fix. The McConnell/Boehner wing of the GOP has been too busy doling out back pats to put oil in the car, and Trump is the thrown rod.

It is fixable, however.

On the Democrat side, Bernie Sanders has been drawing huge crowds of socialist wannabes who want free stuff. His crowd is basically Occupy without all the rape. He’s serving as a placeholder for Elizabeth Warren should Hillary run out of friends who will go to jail for her rather than run the risk of being Vince Fosterized. If she finally has to take the fall for one of her less-than-legal exploits, Fauxcahontas will sweep in about forty seconds later to keep the Democrats “historic first” selling point for this election intact.

It would be easy to be dismayed by the cacophonous (online anyway), Trump supporters with undesirable positions on many things who are pretending to be the GOP base, the perennially tone-deaf Republican Establishment class, or the fact that so many people in America still get politically aroused by socialism.

The media loves to say, “if the election were held today” but, guess what, it’s not going to be. We could be mired in a mind-numbingly boring barrage of headlines about two candidates who believe they’re entitled to the presidency, which I find far more offensive than two no-filter borderline loons who are at least trying to win the office because they want to.

If we’re going to have presidential primary seasons that lasts four hundred and seventeen years, let’s at least have some fireworks early on. Facebook, cable news and the two-headed Bush/Clinton monster have sucked the entertainment value out of politics. If two somewhat touched recent asylum escapees want to provide an early show, I’m buying popcorn.

If Crazy Joe the Wonder Veep jumps into the mix, I’m buying a donkey to rent out.