Stephen Enada
|
Posted: Feb 19, 2021 8:40 PM
Share   Tweet
The opinions expressed by columnists are their own and do not necessarily represent the views of Townhall.com. 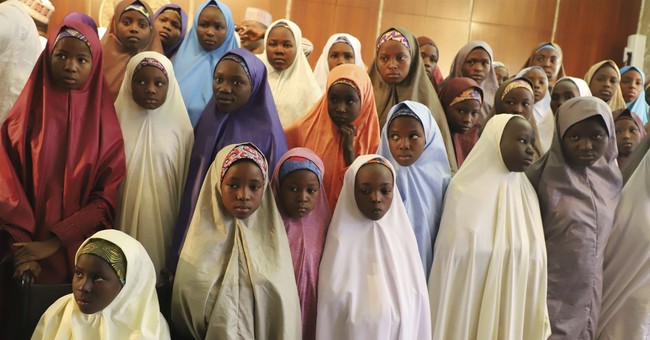 For the past three years, February 19has been a day of sad remembrance for the International Committee on Nigeria (ICON). On February 19, 2018, 110 schoolgirls were kidnapped by Nigeria’s deadliest terrorist group, Boko Haram, from their school in Yobe State, Northeastern Nigeria. In March 2018, all of the surviving girls (five died in the return journey) were released except one, 14-year-old Leah Sharibu. Leah’s refusal to abandon her Christian faith and convert to Islam was the reason she was the only one remaining in captivity – a captivity she endures to this day.

As a Christian, I am in awe of Leah’s strength and passion for our Lord, but as a father, I am heartbroken and devastated at the thought of what this teenager has suffered the past several years. Leah came face to face with the enemy and refused to back down knowing her refusal would result in enslavement, abuse and extreme hardship.

Leah has been a prisoner to one of the world’s most violent fanatic groups who hates everything Leah stands for. From the many rumors circulating, Leah has endured mental and physical abuse, a forced marriage and has born at least one child. This young woman has been through more in the past three years than most of us will experience in an entire lifetime.

Unfortunately, Leah’s story is more common than you know.Since 2001, at least 62,000 Nigerians, primarily Christians, have been killed due to violence brought by Boko Haram terrorists, Fulani militants and other extreme terrorist groups tied to the Islamic State and Al-Qaeda. Nigeria is one of only three countries in the world with a terrorism grade of “Very High” and is ranked third in the 2020 Global Terrorism Index (GTI) of countries most impacted by terrorism. Hundreds of thousands of Nigerians have been forced from their homes due to frequent radical attacks throughout the country, leaving most of them without any way of surviving or supporting their families.

Since 2014, Fulani militants – a small extremist portion of the Fulani – have accelerated conflict at an alarming rate, attacking predominantly Christian Local Government Areas with sophisticated weapons. It is said that Fulani militants are responsible for 7,400 deaths since 2015, targeting and attacking Christian communities, schools and households. Boko Haram has formally pledged allegiance to the Islamic State and, since 2009, 30,000 murders have been tied to Boko Haram attacks.

Although the International Committee on Nigeria(ICON) is proud to be one of the leading voices for Nigeria and Leah, we understand so much more must be done in order for change to occur. The Nigerian Government is not doing enough to stop the violence or to fight to see Leah’s safe return.

When I think of Leah and all of my other Nigerian brothers and sisters experiencing daily oppression, Matthew 5:10 comes to mind: “Blessed are those who are persecuted for righteousness' sake, for theirs is the kingdom of heaven.”

I wonder how many of us would be able to stand firm like Leah. She refused to relinquish the cross when it mattered most; what an extraordinary testimony to true faith.

I believe there is a coalition who will continue to fight for Leah until the Nigerian government helps to return her safely to her family. I hope and I pray we will one day see Leah freed from her bonds and living safely with those who have suffered so much due to her captivity.

Thousands of people around the world will be praying for Leah on February 19. May this date never be forgotten, may we never forget her sacrifice, may our joined efforts result in her eventual freedom and may her strength be a witness to all of us Christians to fearlessly stand up for our God even when faced with persecution.

I am grateful for the opportunity to speak up for Leah and encourage all of us to continue to pray for her and all of our brothers and sisters experiencing oppression due to their love and faith in Jesus Christ.

May we all be as brave and courageous as Leah.

Stephen Enada is co-founder and Executive President of the International Committee on Nigeria (ICON), an America-based organization focused on being a voice for the millions of Nigerians facing violence and terrorism on a daily basis. ICON is hosting seven consecutive days of prayer as well as holding a “Speak Up For Leah” three-hour live event on February 19 (1:00-4:00pm ET) to honor Leah Sharibu’s three years in captivity. For more information or to join the event click here.