Health Care Struggle is About Freedom 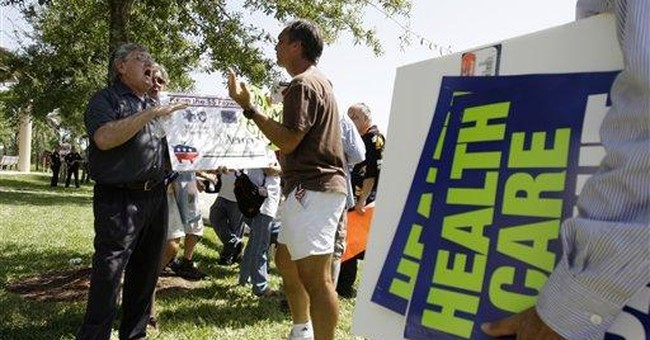 President Obama took his case for what he now calls "health insurance reform" to the faith community. He made his pitch in a phone call, also broadcast over the Internet, to clergy who called in and logged on from around the nation.

In his remarks, the President ticked off points of contention that dissenters have with his proposals -- "government takeover of healthcare...government funding of abortion...death panels" -- and dismissed these concerns as "fabrications." In one swipe, Mr. Obama reduced his opposition to liars.

And why, according to the President, are dissenters supposedly making all this stuff up? Because, he told his audience, they want to "discourage people from meeting...a core ethical and moral obligation...that we look out for one another...that I am my brother's keeper..."

So those whose fight for individual freedom are immoral and our moral champions are those who want to extend the heavy hand of government.

Forgive me if sermons about morality are a little hard to swallow from a man who supports partial birth abortion, who just announced his intent to repeal the Defense of Marriage Act.

And who really wants to obstruct moral behavior?

About 100,000 Americans participate in private, voluntary Christian communities that take care of their own healthcare independently of government and insurance companies. They are called health-care sharing ministries.

These communities assess members "shares", based on family size, which are paid monthly, in addition to annual dues.

Those in the community who need care submit their claims to a central office, which sends members monthly bulletins informing them whose care their monthly payment will be covering.

No government. No insurance companies. It's health care with a true human face, operating in freedom, where those paying know who they are paying for and for what.

In addition to sending funds to cover costs, they send notes and pray for the sick person whose costs they are covering.

You wouldn't think that communities that embody the very essence of personal responsibility and Christian love would need lobbyists for their protection. But they do.

If Barack Obama has his way, they'll be out of business.

Part of the thousand page health care bill mandates that individuals buy insurance and that companies provide it, or pay a fine. These government mandates to buy and provide insurance would make health-care sharing ministries, where communities of individuals contribute their personal funds to take care of each other, unviable.

These ministries share contributed funds of around $80 million dollars annually to take care of each other, driven only by guidelines of biblical principles to "Bear one another's burden, and thus fulfill the law of Christ."

It's crazy that Christian Americans have to lobby to be free in their own country.

Health-care sharing ministries is one particularly beautiful example of how faithful Americans take care of themselves when allowed to be free. But there are many others.

Many creative ideas have been put forth on how American health care delivery can be dramatically improved if markets are allowed to work. John Mackey, chairman of Whole Foods, listed eight in a recent Wall Street Journal op-ed.

In another Wall Street Journal column, a University of Chicago Business School professor explained how forward purchases of insurance could deal with the problem of pre-existing conditions.

But, Barack Obama and congressional Democrats have slammed the door on all this. They only want to hear about more government. Not less.

The problem isn't that dissenting Americans are immoral. It's that Democrat leadership has a problem with individual freedom.