Thompson's failure: substance as much as style 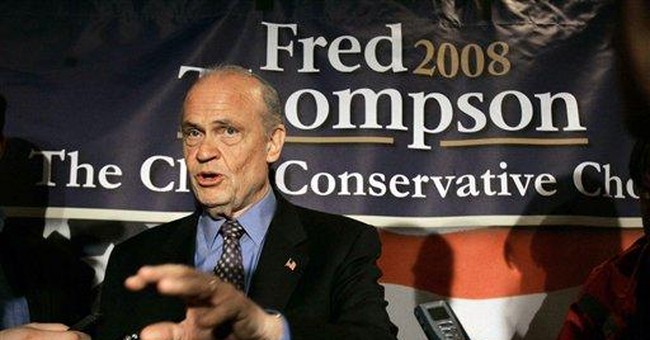 But these analyses miss the more fundamental, and instructive, problem -- his message. Touted as the only "real conservative," a careful look shows that this label was pretty dubious. His ideas were devoid of the vision and leadership that fueled Republican ascendancy a quarter-century ago and badly needed today.

On the social agenda, the difference between Thompson and Mike Huckabee was palpable and significant. Huckabee understands that abortion, like the slavery issue years ago, is not a matter of constitutional nuance. It defines our core moral structure as a people and cannot be legal in a nation that exists "under God."

Thompson's take on abortion: It's an issue for the states, not the federal government.

Polls show that public opinion on abortion is moving in the direction of Huckabee. Americans sense the need for moral leadership and it just wasn't there in Thompson's tepid social conservatism.

On the economic front, it's astonishing that the man running as the "real conservative" rolled out a proposal to save our biggest entitlement program -- Social Security.

When Thompson was making his preliminary moves to announce his candidacy, I got interested. I was impressed that he legitimately, and I thought then courageously, pointed out that no candidate was talking about the massive entitlements crisis facing us.

Entitlements -- Social Security, Medicare and Medicaid -- now account for almost 40 percent of the spending in our federal budget. A new report from the Congressional Budget Office says that at the current rate of expenditures, this could rise to 70 percent by 2030. And there is no plan in place to pay for the enormous growing liabilities of these programs. Moody's, the well-known bond-rating service, recently indicated that the current AAA rating of U.S. Treasury bonds could be downgraded.

I thought Thompson was going to revive the important initiative to transform Social Security from a government tax-and-spend program to a program of ownership -- personal retirement accounts.

But instead he unfurled a proposal that could easily have come from Hillary Rodham Clinton or Barack Obama. No personal accounts. Just the same system with a lousier deal. Make a technical change in the index used to calculate cost-of-living increases each year and thereby reduce the size of the payment that the government is obligated to make.

The tax increases and benefit reductions that have been made over the years to sustain this nanny-state socialism have already made Social Security a horrible deal.

A young person now entering the work force at age 21 could have twice as much money at retirement by simply putting the 10 percent of his or her pay going to Social Security into a savings account or using it to buy government bonds.

And then there is the moral issue that free people in a free country should not have their income confiscated because politicians have concluded that they can't take care of themselves. Shouldn't you at least have a choice?

Not long ago, when the Republican Party was an exciting place to be (remember the "ownership society"?), transforming Social Security to an ownership system was one of the important pillars of reforms being put forward to address causes rather than symptoms of our nation's growing problems.

But, somehow, after the great success of welfare reform in 1996, the energy seemed to dissipate. It was easier to dredge up a groundswell of enthusiasm to move black women off the dole than to get the government off the backs of black blue-collar and service workers (and everyone else) and allow them to take back the 10 percent of their income being taxed and build wealth through their own retirement savings accounts.

If Republicans are to again capture the high ground in the battle for leadership of this country, it must be understood that the failure of the Thompson candidacy was as much substance as style.

We've got to have candidates who take seriously the agenda of traditional values and limited government and apply it imaginatively and courageously to the many problems facing us today.