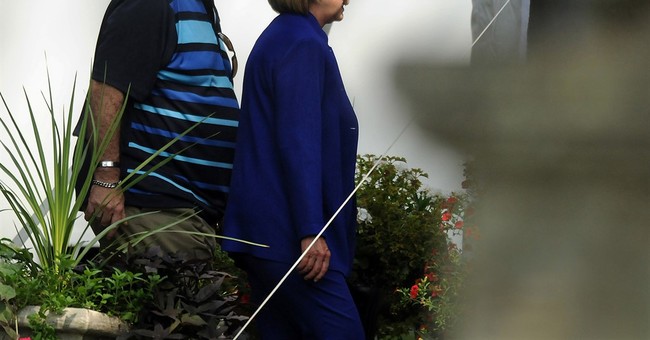 Judging by the recent actions of the Clinton campaign: Americans don’t need access to Hillary Clinton. That’s the underlying message Hillary for America volunteers received when her campaign had a scheduled stop at a black church in Florissant Missouri, a suburb of St. Louis. Clinton was in town to speak to one of her core constituencies; the so-called black community (so-called because lumping all 48 million black Americans into one monolithic hive mind is silliness.)

As news of Hillary Clinton’s inability to fill a venue reaches a comical level of reoccurrence; her campaign team have taken to restricting entrance to pre-approved major media, roping off journalists or simply avoiding interviews altogether. Who can forget the refusal to admit the Pool Reporter to the Clinton caravan to cover campaign stops? Good times. Clinton campaign supporters rightly expect to be treated differently, but alas that was not to be. Even supporters were carefully screened. Although the church wasn't full, once the doors closed, no one else was permitted entrance.

I stood outside in ninety +-degree heat with four of her devoted supporters, women who worked as volunteers for Obama For America who had already signed up to do the same for Clinton. They were perplexed; they could see empty pews through the vestibule, yet staff told them repeatedly that the venue was at capacity and the “Fire Marshall prohibited more people” from entering.

Contrast this with Gov. Scott Walkers recent visit to Missouri. He attended church with friends, stopped by a locally famous Barbecue restaurant Sugar Fire Smokehouse, and stood outside for roughly an hour shaking hands and speaking to people. There was no rush, and he was completely at ease.

Local media people were present taking photos and video; no pre-screening, no “Most Favored Media Status” required. The same can be said for the entirety of the Republican presidential field of candidates. They seem to want to take questions, and engage the media on every topic.

Hillary is down in the polls, with her "honest and trustworthy" numbers taking the hardest hit as Americans get a clearer picture of her penchant for lying and covering up inconvenient truths. A paltry thirty percent of Americans find Clinton honest, which is pretty tough considering her high level of name identification nationally. This isn’t a matter of Clinton winning over reluctant voters that don’t know much about her; these are Democrats who do not like what they know about the candidate. What is known isn’t pretty. While it’s nearly impossible to be in politics and the public eye for as long as Clinton has, her negatives are numerous and recent.

Take the private email server scandal; it has new legs as the DOJ opens an investigation into whether classified information was improperly stored and shared. It appears that Clinton has received preferential treatment because no attempt has been made to access, confiscate or even examine the personal server that Clinton still maintains ownership of. In any other case of a possible email security breach the server would be seized via the execution of a search warrant served as soon as authorized by a judge. The FBI or Department of Justice would have done this.

The deaths of four Americans at the embassy in Benghazi may matter little to Ms. Clinton, but family members deserve answers and Congress is duty bound to provide them. The media has completely ignored the story choosing instead to insinuate that the investigation is a harassment of Clinton intended to hamper her campaign for the presidency. Any astute observer can see the investigation would have reached completion by now if not for the Obama administration and Hillary Clinton’s refusal to cooperate. Each request or subpoena for information has been met with stonewalling, silence or cries of persecution. Hardly the behavior you would expect of a presidential candidate.

Hillary's blindly defensive position on federal funding for Planned Parenthood is one that voters can't stomach in light of the ghastly new revelations about the sale of fetal tissue. Clinton has actually called Republican presidential candidate Carly Fiorina extreme for wanted federal funding eliminated for the abortion giant. Oddly, this support belies the fiscal status of Planned Parenthood; they actually run a $400 million dollar a year deficit. So taxpayer funding is integral the number one provider of abortions in the U.S.

With the passage and implementation of the Affordable Care Act, why should taxpayers be on the hook for this? Perhaps Candidate Clinton would explain this to taxpayers on her next campaign stop.

Then there's Clinton's refusal to hold her husband accountable for his philandering, groping, and predatory ways with women. A new book that purports to share even more torrid details of marital infidelity on the part of former president Bill Clinton further demonstrates a lack of control. This failure to engage on an issue so integral to empowering women doesn't match up well to her mantra of modern Feminism.

Despite of all of this, Hillary Clinton claims she is the woman eminently qualified to be the nations first female president. Just don’t expect to hear her speak about her candidacy in person or provide voters the ability to ask her any questions directly.