S. Marshall Wilson
|
Posted: May 24, 2019 12:01 AM
Share   Tweet
The opinions expressed by columnists are their own and do not necessarily represent the views of Townhall.com. 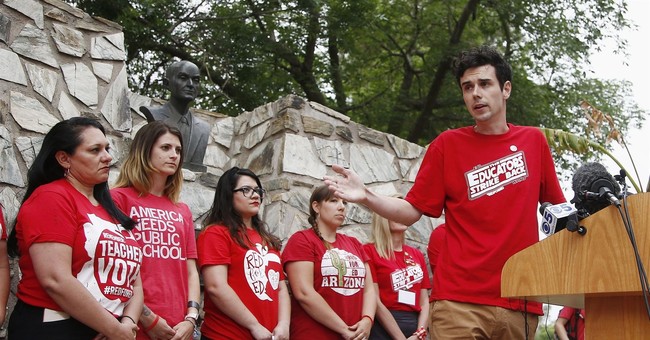 During the 2016 presidential election, West Virginia returned 68% of the vote for Donald Trump. That fact would seem to indicate that the state leans hard to the right; but for at least 105 years, a deeply rooted cadre has agitated to restructure West Virginia according to the Marxist dialectic. In spite of the strong Republican win in 2016, the movement remains actively engaged in that mission.

On February 22, 2018, the American Federation of Teachers (AFT) and the National Education Association (NEA) issued a call to the teachers of West Virginia to strike. Many rank-and-file teachers, both union and non-union, have stated that the reasons for the strike were low teacher pay and the fact that the Public Employees’ Insurance Agency (PEIA) lacked a “dedicated funding stream.” The complaint about low pay is valid and has been an issue for at least four decades, but since State Code requires taxpayers to subsidize PEIA premiums at 80%, the Legislature must fund PEIA to that standard each year regardless of the original source of the funds. In spite of the irrelevance of the funding source, organizers of the strike demanded and urged their members to demand precipitous increases in severance taxes on the nascent gas and recovering coal industries upon which the economic recovery of West Virginia heavily depends.

The strike began officially on February 22, 2018, but the local Socialist organizers were preparing in the summer of 2017. According to Emily Comer, a West Virginia Public School teacher and Socialist activist, “In the summer of 2017, our chapter [of the Democratic Socialists of America (DSA)] formed a labor committee for teachers… the decisions of my local DSA chapter in Charleston proved to be instrumental in the development and outcome of the strike.” She added “As Socialists, we also understood our responsibility to lead.” The strikers adopted historic Marxist tactics such as Agitprop, symbols such as the raised fist and the color red, and the celebration of International Workers’ Day.

During an interview with Jacobin magazine in March of 2018, Comer declared the strike “… a huge victory…” “… not just for us but for all public employees...” In spite of the declaration of victory, West Virginia teachers again went on strike in 2019 to defeat Senate Bill 451 (SB451), the Comprehensive Education Reform Bill, which contained a pay increase, bonuses for certified math teachers, reimbursement for classroom expenditures, and a number of other reforms intended to increase accountability and effectiveness at all levels of the education bureaucracy. Of the two dozen provisions in the bill, the unions focused their efforts on denying parents educational choice via charter schools and education savings accounts. Many teachers who went to the Capitol stated plainly that they would surrender the pay increase and other benefits to ensure that education choice remain illegal. In 2019, the strikers were willing to surrender a 5% pay raise which, in 2018, they had considered “a huge victory” merely to ensure that no publicly funded schools were allowed to function by any methodology than that imposed by the West Virginia Board of Education (WVBOE). The argument offered against charter schools was that it took critical funding from traditional public schools, but West Virginia is rated 14th in the US in per-pupil investment and 42nd in effectiveness. The funding-related issues in West Virginia Public Schools result not from a lack of funding provided by the taxpayers but rather from the management of those funds within the public education system.

Apparently, the purpose of the Socialists’ infiltration of the teachers’ groups greatly exceeds mere usurpation of their prerogatives and passions. Just as the genesis of the Socialist engagement was outside West Virginia; so is the revelation. Of Eric Blanc, a Socialist writer, recruiter, and organizer, Comer wrote, “As a former teacher, organizer, and fellow radical, he quickly earned the trust of our core militant teacher-organizers… He spent long days at the capitol organizing nationwide solidarity efforts and making himself genuinely useful on the ground.” She then describes the système de guerre that West Virginia Socialists intend to export to other states. “Our wins… have brought the strike weapon (emphasis added) back to the table… organized socialists would do well to take seriously the outsized impact a small group of radicals can have in their workplace.”

The small group of West Virginia radicals is faithfully transmitting the message of their “outsized impact” in speaking engagements, opinion pieces in local newspapers, articles for Socialist and union journals, and on social media. They also reward those who advance the Socialist dialectic. At the “Troublemakers School,” a weekend of seminars to train teachers to “build power” in their workplace, Jay O’Neal, a West Virginia public school teacher, was awarded the “Fearless Revolutionary” award. O’Neal also contributed to a collection of personal stories from the 2018 teachers’ strike titled 55 Strong. The title refers to the fifty-five counties of West Virginia. The book is a sympathetic account of the 2018 strike from the perspective of the teachers who helped to organize and actively participated in it. In the conclusion, the editors state, “In corners of classrooms (emphasis added) are signs and artifacts from the strike, reminders of the unbreakable bonds between teachers and their students.” Given the path to Socialism which the leaders of the teachers’ strike walk, will those “unbreakable bonds” carry the students along? The Socialist leaders of the West Virginia teachers’ strike seem intent on ensuring it. At a recent graduation in Putnam County, they awarded to a student a “Strike Scholarship” to reward her support of the teachers’ strike.

The tactics described above pervade WV politics producing a veritable hostage scenario in the public school system where teachers, parents, and legislators refrain from comment for fear of retribution against their children and their livelihoods to the extent that the few who dare to address the issues are easily dismissed by the cabal.

S. Marshall Wilson is a retired US Army Officer and a West Virginia State Legislator. The positions espoused in his work are his own and do not necessarily reflect those of the State of West Virginia, the WV House of Delegates, or the Republican Party.