Shawn Mitchell
|
Posted: Aug 06, 2018 12:01 AM
Share   Tweet
The opinions expressed by columnists are their own and do not necessarily represent the views of Townhall.com. 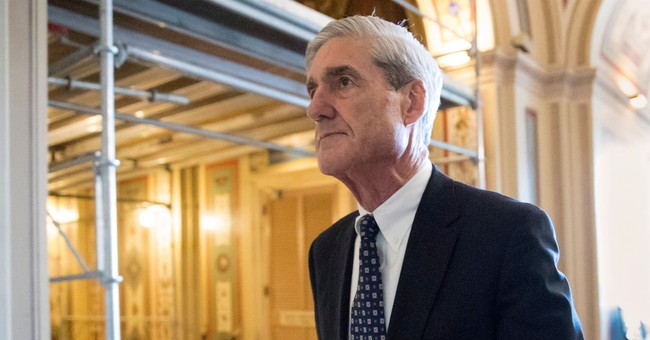 Special Counsel Robert Mueller’s dogged, boundless, and seemingly endless pursuit of Donald Trump could be a comedy if the stakes weren’t so deadly serious for the Republic. It could be a soap opera if there were more of a romance angle, although a couple crooked FBI agents do manage to throw some sex into the mix. It could be a documentary if the twists and turns were believable. Alas, what the Muller probe is is a reflection of the state of American government, law and politics in 2018.

This is the harrowing tale of how Robert Muller set out on the Great Hunt for Russian Collusion and is now reduced to psychoanalyzing presidential grunts and tweets for hostile intent against Mueller. He must find something to scold Trump for.

In May 2017, newly minted Special Counsel Mueller set out to investigate alleged collusion between the Trump campaign and Russians to steal the 2016 presidential election. If you step far enough back from the fevered need of Democrats and the media to explain how a schmuck like Trump could beat a titan like Hillary, the idea is idiotic on its face.

Consider: Accept the worst caricature the Left can paint of Trump.  He’s an avaricious, short-fingered vulgarian billionaire determined to seize the presidency by any means, straight or crooked. He intends to funnel federal dollars and contracts to his businesses and those of his rich buddies to make them all filthy richer. So, how will this super (rich) villain go about his skullduggery?

Well, obviously, he’ll call Vladimir Putin and ask Vlad if he can gift wrap the Oval Office and deliver an early Christmas present for Donald.  It makes perfect sense. The dictator who rules his nation with an iron fist, demagogic popular appeal, and has critics jailed or killed should be the genius with just the right messaging and touch to eke out improbable wins in key Midwest and Rustbelt states that Trump needs to pick the electoral lock and pull off a shocker.  Riiight.

Except that’s exactly backwards. American operatives go to the Eastern bloc and make millions as political consultants helping candidates and parties there, not the other way around.

Or maybe it’s that Russian trolls and activists are known worldwide for their social media ju ju and would clearly offer Trump a stronger, better-tuned voice than any trolls or activists he could recruit in America. Makes, sense, da?

Then, it must be the hackers! Russians are The Best. They can crack the voting machines in Wisconsin and Ohio. Get ready for beluga caviar in the White House! Except, there is no serious allegation that anyone penetrated any voting machines in key states. In any event, why would Trump enlist overseas hackers who would certainly leave distinctive electronic fingerprints, when he could recruit basement dwelling castaways from Big Tech and academia right here at home?

No. The great Russia Conspiracy was a sham and distraction from the start, concocted to excuse Hillary and thwart Trump—maybe remove him or at least tie his shoelaces together. Even Trump-hating FBI agent Peter Strzok knew it when he told lover Lisa Page there is “no big there there.”  Instead, the deep staters would have to look to their “insurance plan.”

Mueller’s quite rightly labeled “witch hunt” has split and gone two fruitless directions.  First, he’s chasing unfortunate associates of Trump for decade-old financial and paperwork violations that have nothing to do with Trump or Russia.  But, for the marquee, he has filed two rounds of show indictments of  Russians. Kind of like old Russian show trials, except the Bolsheviks had real defendants in the dock and they were in dire trouble.

Mueller never expects his sexy Russians to see the inside of a US courtroom, but they lend a fig leaf of validation to his appointment and his absurd continuing chase. In the first case, one of the Russian companies actually hired a US law firm to defend it. Mueller has suffered any number of setbacks and embarrassments as he delays and tap dances to find a way not to actually put the company on trial.

In the other case, Mueller abused US intelligence and converted monitoring of foreign espionage into domestic US crimes. He indicted Russian agents who will never set foot on American soil.

Tellingly and damningly, both cases are absolutely naked of any allegation that Trump or the campaign cooperated with or even knew about the defendants’ activities. It appears at this juncture Mueller has a big fat zero on Trump colluding with Russia. So, the very Special Counsel has moved to manufacture a case for obstruction of justice. That explains the ridiculous breadth of his proposed interview of the president. Mueller wants to ask about his tweets, his thoughts, his reaction to news stories, what he said to aides as events developed. All of this is vicious nonsense.

He wants to sit down and grill the president so the famously fast and loose talking reality star spews out some inconsistencies. Some different nuances. Maybe even gets a date or sequence wrong. And Mueller will gravely stroke his chin and report that the president provided false statements to his Special Inquisitors; it saddens Mueller to conclude that the President may have committed a high crime or misdemeanor.  Congress must give due consideration to impeachment.

That has been the corrupt coup game since Day One.  Trump would be foolish to walk into Mueller's trap.