Shawn Mitchell
|
Posted: Jan 30, 2018 12:01 AM
Share   Tweet
The opinions expressed by columnists are their own and do not necessarily represent the views of Townhall.com. 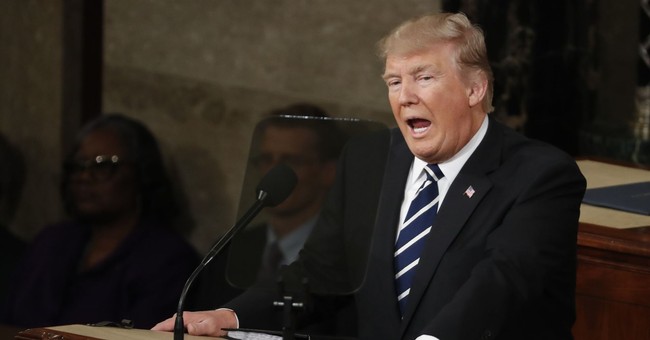 Donald Trump will deliver his second State of the Union tonight, dogged by Democrat and media allegations that he is Putin’s patsy and fanboy. The wily Russian gave Trump an assist into the White House and POTUS is paying his benefactor back with deferential behavior.

Let’s get serious. Putin is not a bad player of global poker. If he bet big on Donald Trump, that would make him a chump getting his clock cleaned at the table.

It was always a ludicrous notion that by buying a few social media ads and leaking some dirty DNC emails Putin could swing the election. He would have to overcome Hillary’s billion dollar war chest, the incalculable in-kind contributions from her canine media, and Trump’s sui generis bombast and spittle. Does that sound like a bet a cagey KGB operative would make?

The theory becomes even more ludicrous in light of Trump’s actions as president. In contrast to his predecessor, Trump’s administration is the worst thing that has happened to Vladimir Putin or Russia since the fall of the Iron Curtain. He’s pounding Putin worse than Barack Obama ever pretended to want to. Let’s count the ways.

Since Trump’s inauguration last January, the United States has confronted, criticized, or frustrated Russia in global diplomatic forums, in military alliances, in economic competition, in regional military conflicts, and in prosecuting human rights abusers. US Ambassador to the UN Nikki Haley set the tone early, calling out Russia for coddling Bashar Assad’s atrocities in Syria. In blunt language never heard from her recent predecessors, Haley declared to the UN General Assembly:

When Putin’s client Assad again gassed his own people, crossing the red line Obama had marked in chalk, Trump laid down the paint and bombed the facilities Assad used to launch the strike. Putin sputtered, but Assad got the message.

While critics feared Trump wanted to abandon NATO and leave Europe to the mercies of the Bear, Trump had different plans. At the NATO summit and before he put leaders on notice that their dues were underpaid and overdue and they could not count on Uncle Sam’s perpetual generosity. Trump returned home with a strengthened NATO and a member commitment to increase spending by almost 5% next year alone.

Trump’s domestic policies, while good for American industry, are also hitting Putin in the pocket book. Reversing Obama’s hostility to domestic energy development, Trump has eased permitting and rolled back executive drilling bans in coastal waters and in Alaska. America’s contribution to the global gusher of oil and gas devalues one of Russia’s few hard assets as well as reducing Russia’s strategic leverage over its neighbors.

One of Russia’s vulnerable neighbors is Ukraine, which lives under the threat of Russia’s resurgent expansionism. Ukraine has long sought lethal defensive weapons to deter Russian aggression. Obama refused, and sent them food. Trump approved sales of lethal weapons to Ukraine over Putin’s strenuous objection.

Trump hit again when he invoked the Magnitsky Act, naming Russians who were guilty of human rights abuses. The named individuals will face economic and political sanctions and be barred from entering the US.

All of this is in sharp contrast to the last administration. The one that withdrew from missile defense agreements with Poland and the Czech Republic. The one that sent Hillary with that silly reset button. The one that mocked Mitt Romney for declaring that Russia is a foe of America. That whispered to Putin through Medvedev that America would be more flexible after Obama’s last election. That invited Putin into a position of power and influence.

The contrast is stark. The change is better for America and the world. And Democrats have some nerve accusing Donald Trump of being soft on Russia.