Trump’s Political Hits and Misses Between the Storms

Shawn Mitchell
|
Posted: Sep 12, 2017 12:01 AM
Share   Tweet
The opinions expressed by columnists are their own and do not necessarily represent the views of Townhall.com. 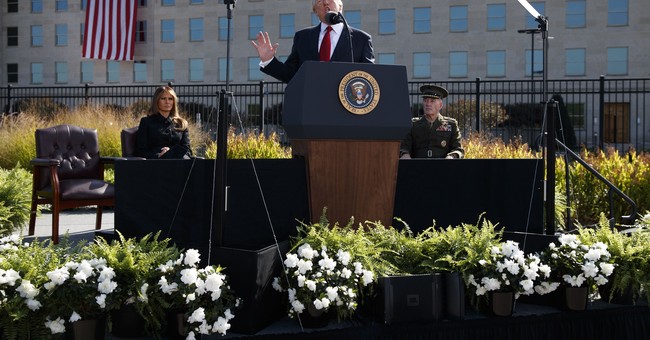 Behind the receding waters of Harvey and the deafening roar of Irma, the Trump administration last week did a fair bit of administrating, not just on emergency response, but on a wide range of policy and legal issues. In a strange way, the hurricanes created a loud white-noise that dominated the agenda and blotted out the media’s fabricated frenzies in search of impeachable offenses. This makes it easier to assess Trump’s moves on their merits rather than through the combat echoes among Never Trumpers, Trump Loyalists, and uncommitted observers. The week offered plenty of fodder for supporters and critics alike.

First, there was the federal response to the storms themselves, which, despite inevitable and mostly churlish sniping, generally has been praised as sure footed and reassuring. Presidents are in their strongest position to be seen as presidential while responding to threat or catastrophe.

The president’s biggest governing move was his action to rescind, on a six-month fuse, President Obama’s DACA program which granted legal residency and some benefits to certain unlawful immigrants who were brought to America as children. The president’s announcement sparked intense debate both about the merits of giving cuts to the front of the line for some immigrants, the harshness of deporting young adults to unknown “homes” because of events that happened when they were children, and, the dry but crucial debate over the proper maker of the decision, Congress or the president.

The Justice Department surprised many conservatives and infuriated a few when it announced it would not reverse the decision of Obama’s DOJ not to prosecute Lois Lerner for her abuse of office, when she directed harassment of conservative activists seeking non-profit status for their groups. This observer gives that decision a thumbs down. If anyone deserves to wear stripes for the stripes she flogged onto the backs of American citizens, it is Lerner. However, some savvy commentators suggest this is the best outcome. With civil lawsuits proceeding against her and the IRS, and with the criminal threat removed, Lerner has no refuge to hide behind the 5th Amendment. She must answer all questions or faced contempt charges. Further, legal investigation, depositions, and documents should provide a trove of information for plaintiffs to expose wrongdoing by the government.

AG Jeff Sessions caused controversy this week when he announced the administration would reverse Obama era restrictions on local police departments using shared federal dollars to purchase surplus military equipment. The debate here is mostly symbolic, as Obama did not actually prohibit local purchase of war implements. He just restricted one pot of money that police departments had relied on: shared revenues seized from criminal suspects in the controversial practice known as “asset forfeiture.” Departments could still buy advanced gear. They just had to dig into their own pockets.

Trump’s reversal of the policy is consistent with his campaign promises to crack down on crime and to be more supportive of police work. It strikes some conservatives and civil libertarians as wrong headed, however, both in endorsing the trend toward militarized police departments, and in recognizing and rooting deeper the offensive tactic of seizing property from people who have not been convicted of, or often charged with, any crime.

Trump’s other big news this week was blindsiding Mitch McConnell and Paul Ryan to cut a deal with Chuck Schumer and Nancy Pelosi on a short term extension of the national debt limit. McConnell and Ryan had pressed for additional concessions from the Democrat caucus and Trump basically stiffed the Republicans to side with the Democrats.

Trump’s Republican fans think it demonstrates a needed new toughness and shot across the bow of the Accomplish-Nothing Republican Congress. His Republican critics cite it as evidence that Trump was always a Democrat and seeking occasion to sell the GOP’s soul.

No one, probably not even Trump, knows exactly what he intends. He did seem to drive a weak bargain, asking for little from Schumer and Pelosi for the handshake and with only a three month deal, setting up another shut down showdown in December when other things will be in full boil.

Finally, Education Secretary Betsy Devos announced that the DOE will review and modify certain policies of the Obama administration that controlled the way colleges conduct sexual assault and harassment investigations on campus. Supporters of the announcement believe the existing practices are a one-sided travesty that deny accused males fairness and due process. Women’s groups and other activists argue the move turns a blind eye to a campus rape culture and will cause more women to be victimized.

Reviewing all these developments affords political animals a certain respite from frenzy fatigue and gives a chance simply to discuss policy pros and cons, rather than be sucked into the great maelstrom of condemning or defending Trump and Trumpism. When the wind and water settle, this will be remembered as a politically consequential week.