Shawn Mitchell
|
Posted: Sep 04, 2017 12:01 AM
Share   Tweet
The opinions expressed by columnists are their own and do not necessarily represent the views of Townhall.com. 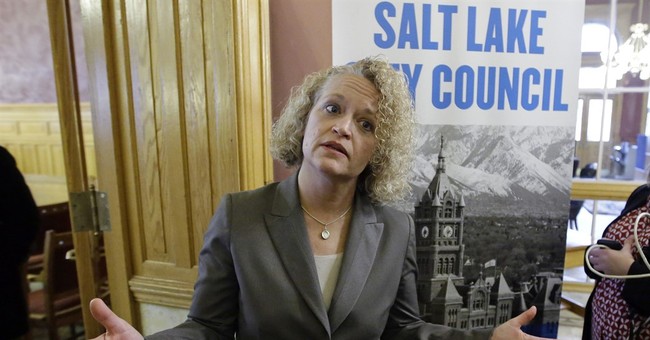 By now, most people probably have seen the disturbing video of a Salt Lake City Cop manhandling and arresting a University of Utah nurse for doing her job, following protocol, and protecting an unconscious patient in her care. The chaotic scene can be viewed here.

In brief, Detective Jeff Payne demanded access to an unconscious accident victim who was suspected of no wrongdoing in order to draw the man’s blood for the police investigation. Nurse Alex Wubbels cited hospital policy and an apparent agreement with the police department that allows a blood draw only with patient consent, or a warrant, or if the patient is under arrest. As none of those elements were present, she declined. Payne pressed the issue and radioed a desk lieutenant who instructed Payne to arrest Wubbles if she did not comply. Wubbles had a hospital lawyer on a cell phone speaker, who advised Payne he was “making a huge mistake.” Payne lost patience and his cool, yelled “We’re done here. You’re under arrest!” and charged and grabbed Wubbels, handcuffed her, and pushed her out the door toward his vehicle while she screamed “Help! I’ve done nothing wrong! This is crazy!”

After the video appeared on social media, public outrage erupted. Following a familiar pattern, official backpedaling and damage control quickly followed.  But, authorities’ convoluted response actually presents more questions than answers. The questions are serious and go to the competence and integrity of the Police Department.

At a Friday press conference, Salt Lake Mayor Jackie Biskupski and Police Chief Mike Brown gave muddled, unsatisfactory explanations of the city’s response. Biskuski said she did not want  “an entire police department to be painted in a bad light due to the actions of one individual. Clearly we believe the actions of this individual were not justified.” But, this episode does in fact paint the entire department, and not just one individual, in a bad light, starting with the explanation offered by Chief Brown, who stated:

The Chief’s statement is both underwhelming and over-excusing. It raises at least the following questions:

Whether the arrest was lawful or not, the nurse was calm and professional. The cop escalated the situation with a sudden outburst of temper and violence in a hospital ER room. Why was that not grounds for immediate suspension? What possible justification could any “investigation” uncover for his brutish behavior?

What kind of consequence is being removed from the blood drawing program, obviously a sideline the job of a full-time detective? It seems the slightest of administrative wrist slaps. What assurance do Salt Lake residents have that Payne will not be in a position to abuse his authority in other ways? (Under mounting public pressure, the Department later announced Payne has been placed on administrative leave pending the outcome of the investigation).

Payne’s commanding officer, the lieutenant at the desk, instructed him to arrest Wubbels if she did not allow him to draw blood. If Payne’s action was improper, so was the lieutenant’s order. Why is Payne being singled out? What accountability or possible consequence does the lieutenant face?

Nurse Wubbels referenced an agreement between the hospital and the department, with clear criteria to permit a blood draw. Those criteria were not satisfied. Hospital counsel on the phone advised Payne he was making a huge mistake. These informed, professional communications should have presented a serious check to Payne and his desk commander to make further inquiry before slapping cuffs on an on-duty nurse. Why didn’t they?

Is there in fact a Memorandum of Understanding between the hospital and the Department on this issue? Did Wubbels accurately summarize its terms? How could the trained police phlebotomist and his superior be ignorant of the Agreement?

Chief Brown’s announcement the blood draw policy was immediately changed is also problematic. Were Payne and the lieutenant out of line or was the policy flawed? Did Payne and the lieutenant follow the policy or did they violate it? If they followed policy, then it was seriously flawed and the problem reaches higher than the single individual Mayor Biskupski eagerly threw under the bus.   Is it reasonable to single out Payne for disapproval? What about the Department’s responsibility to have sound materials and training?

What training programs and review protocols does the Department have in place to ensure that officer knowledge and written policies and manuals reflect current legal and Constitutional standards?

Before public outrage forced Payne’s suspension, who made the decision to leave him on active duty, with removal from on-the-job phlebotomy as the only current consequence? This incident obviously touched a sensitive nerve for the viewing public. But, it appears initially to have triggered a lesser reaction with the brass. How can the public be confident that the Salt Lake City Police Department is mindful of and protective of the rights of all citizens?