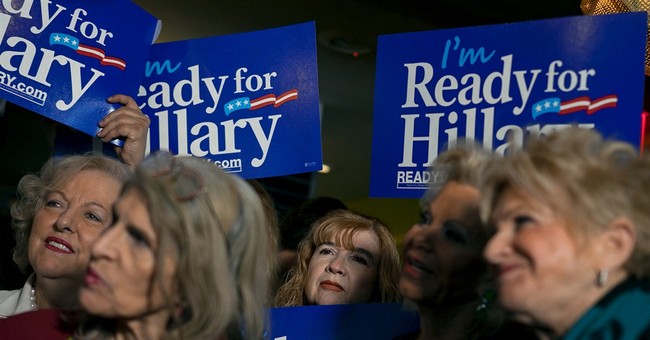 Ironic. Feminists are going to rally around the woman who oversaw the slander and destruction of other women to suppress her meal ticket hubby's "bimbo eruptions."

Obama assures us he has a tight handle on the Mullah's nuclear shenanigans. This from the same guy who claims to learn what mischief his cabinet heads are up to from watching the news.

8-ish year old kid ready for the soccer game. His dad fogs him with a spray-can blast of bug and sun repellant, making a cloud that temporarily darkens most the city of Broomfield.

I wonder how many years until the fetish of hiding every inch of our bodies from the sun that gives us life joins the settled science about fat and salt and carbs on history's ash heap.

Hey cops, we know most of you are good. The problem is your institutions and employers cheat and lie to protect bad ones.

Ubiquitous cell phones and social media have clued us in to how much injustice there is, how many people have gone to jail that shouldn't, how many cop shootings weren't prosecuted that should. Drop the blue code. Police your own. Prune out the bad apples. Or we will fear and oppose the lot of you.

Though, nine decades later the U.S. might be playing catch up. But you couldn't possibly be clumsier trying to make the point.

I need to write an article about this. So tired of young liberty-hipster disdain for Ronald Reagan. As far as I can tell, it boils down to them thinking every deviation from their dorm room conception of the libertarian ideal is proof of the man's insufficiency.

So innocent and anachronistic.

No concept of context, of considering the sea the man swam in, the currents he swam against, and the sharks he had to fend off.

Ronald Reagan is the only president we’ve ever heard suggest government is a big part of the problem. It’s too big, too controlling, and conflicts with the American dream of a free people prospering by their free enterprise.

Ronald Reagan had to fight the suited, monied GOP establishment even to get the nomination.He had to fight the federal bureaucracy and hostile leaks on every move he made. He had to sword fight hostile national media at every press conference he gave, and their caricatures of him every night on the evening news.

Ronald Reagan ran more artfully on themes that got Barry Goldwater slaughtered in 1964. He moved the ball against a bitter defensive establishment. He wasn't perfect. He fumbled some. He called some wrong plays. But within Teddy Roosevelt's Arena of men who do things, no one was as strong or courageous for a limited federal government since Calvin Coolidge.

Reagan merits our gratitude and respect.

America's disgraceful pretend media was more interested in Bristol Palin's party fight than in figuring out who caved in Harry Reid's face, broke his ribs, and why.

A republic can't function without watchdogs that sniff and bark. Sadly, all these mongrels wanna do is leg hump Democrats and hike a leg on GOP candidates

About the only good news I can think of right now is that Brontosaurus is again recognized as a dinosaur, and people are taking up the cause for planet Pluto.

We can only hope the DC/White House power outage wasn't triggered by the same Russian agents who roamed freely through the White House email network for more than a year, and are now testing what other toys they can manipulate.

Not enthralled with Rand Paul's foreign policy views. But I like him. If the GOP can't evolve toward genuinely supporting smaller, less controlling government, government that doesn't control wealth distribution, put a thumb on the scale for this company, that industry, this technology, or these cool movie makers, then I will join the nihilistic crew that says: "Go to hell, GOP. I'm holding out for something better...i.e. freer."

When liberals get done with energy policy, poor people will be able to afford only two minute showers and they’ll have to wear sweaters at home six months of the year.

Somewhere in Dante's circles, Jimmy Carter is laughing in a Mr. Rogers sweater. Oh, he's not passed yet?

My posts about Indiana have strongly supported the right of people to worship, to believe, and to act on their beliefs in their daily life. Also about the totalitarian impulse of Leftists to stomp out any noncomformity. I stand by those posts. Freedom is our most precious birthright after our life.

But, today, I want to ask the people who sincerely oppose baking the cake, what do you make of the example of Jesus? When he was an invited guest at the home of Simon the Pharisee, he accepted the devotions of a woman of bad reputation. During his meal at the public official's table, she cried at his feet, kissed them, and wiped them with her hair.

Simon stroked his chin, and thought, "If this man were a prophet, he would know what kind of woman this is, and he wouldn't abide her company."

Jesus knew Simon's thoughts and taught him a lesson about sin and guilt and forgiveness and gratitude. And he never asked the woman to go away. It always bugged the Pharisees that Jesus hung out with Publicans and sinners.

So, I ask the Don't-bake-the-cakers, whatever His teachings inform you to do in your own conduct, where in the Lord's example, do you find counsel to withhold your fellowship from the people you deem sinners?