Rudy’s Right and His Critics Know It 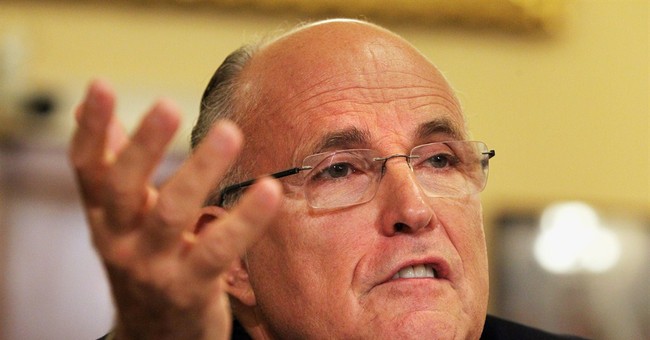 Enforcers from the Left are scrambling to delegitimize Rudy Giuliani’s statement that he doesn’t believe Barack Obama loves America. They know Giuliani only said what many millions of Americans think, and want to stop the discussion from catching fire.

To paraphrase a past president, the answer depends on what the meaning of America is. That’s a discussion Obama’s protective media has suppressed since he appeared on the national stage, along with cordoning off discussion of his background, world view, and what it might mean for the nation.

Let’s bypass the mayor’s verbiage and ask instead: What does Barack Obama believe about the United States and the rest of the world? How would he change America? Our only clues are his biography and associations, his pronouncements, his actions, and their results.

Without assigning parents’ beliefs to their children, it would be unserious to ignore them in considering children’s development. The leftist sympathies of Obama’s mother and his father’s communist scholarship are of record. So too, are the Islamic, anti-western views of his grandfather, and the communist views of his maternal grandparents and an important mentor in his youth, Frank Marshall Davis.

Who of these would have taught young Barry to understand and love the Declaration, the Constitution, the flag, or the Republic for which it stands? What evidence suggests he adopted those values?

We don’t choose family, but we do choose associates. Obama’s early political mentors Bill Ayers and Bernardine Dorhn demonstrated their affection for the American way by bombing and killing Americans. His preacher of 20 years famously thundered “No, not God bless America! God damn America!” Obama’s wife Michelle pronounced America “just downright mean” and “guided by fear” and famously declared the first time in her adult life she felt proud of her country was the occasion of her husband’s nomination.

Obama’s own statements offer little evidence of affection for American norms and traditions. He wrote his brief stint in a modest private sector job felt like being “a spy behind enemy lines.” He said on a radio show the famously liberal Warren Supreme Court was not that radical, because for all its liberal rulings on criminal justice, it never altered the basic structure of the Constitution and moved from negative rights—limits on government abuse of freedoms—to positive rights—forcing government to create and expand benefits.

Candidate Obama was caught on tape describing middle Americans as frustrated dupes, bitterly clinging to guns, religion, and hostility to immigrants and foreigners. Challenged on his economic plan, Obama told Joe the Plumber his idea of prosperity was taxing more and “spreading the wealth around,” so we’re all better off. His faith is in redistribution over effort and production.

Astoundingly, he told ABC’s Charles Gibson he would want to raise capital gains taxes even if it reduced government revenue, because it was a matter of fairness. Seldom has a major figure expressed a view more contrary to American traditions and values than arguing to confiscate wealth from the rich, even if it makes the government poorer, because, it’s only fair.

Obama rejected American exceptionalism by noting most every Brit, Greek, and American probably thinks their respective nation is pretty cool. In a smooth smirk, he thus dismissed anything exceptional about America’s founding, prosperity, influence, or role in the world.

On the cusp of election, he famously vowed to fundamentally transform America. His protectors in the media have, ever since, made it taboo to discuss just what he meant.

And then there is how he governs.

Obama’s pervasive deception of voters--his consistent promise of the exact opposite of his intentions--reflect not so much a loving relationship as political domestic violence.

Candidate Obama said one of America’s biggest problems was all the power George Bush took into the executive branch, refusing to go through Congress; that’s what he would reverse as president. The real Obama, however, is the most expansively unilateral president in America’s history.

Candidate Obama declared Bush’s deficit spending was “unpatriotic” and promised to “comb through the federal budget line by line” to eliminate wasteful, inefficient programs. Safely sworn to office, Obama immediately reneged and colluded with Harry Reid to stop passing budgets altogether, instead rolling them over with annual continuing resolutions. This not only froze in place all federal spending, it audaciously locked into the budget the 20% increase of the supposed emergency TARP bill passed in Bush’s final year to counter the 2008 credit crash. Obama saw Bush’s “unpatriotism” raised him 20% and put it on autopilot.

His health care takeover was rammed down the throats of resistant Americans by lies and legislative abuse. Millions discovered we couldn’t keep our doctors and plans. We aren’t paying thousands less, but thousands more, with higher deductibles. The majority is less, not more secure in their health coverage. And now, we’re accountable to an army of federal bureaucrats for our plans’ compliance with tens of thousands of pages of law that Obama enforces or waives at his whim. This Kafkaesque double cross is not an act of good will.

While talking about empowering families and workers, Obama has aggressively expanded dependency on government in all forms, for food, shelter, education, and healthcare. The richest, fattest nation in history has never had more dependants than under Obama.

Two historic repudiations by American voters, the midterms of 2010 and 2014 did not temper his course; they fueled his aggression. After losing the House in 2010, Obama moved further left and spurred the IRS and other agencies to persecute citizens who dared organize and speak against him. After losing the Senate in 2014, Obama stared into the cameras and announced full speed ahead. He’s now pursuing an accelerating string of unconstitutional executive action.

Then, there is Obama’s stewardship of American world standing, characterized by alienating friends, emboldening enemies, and diminishing American influence.

Early in his presidency, he appeased a tyrant, humiliated an ally, and reduced American security by reneging on America’s commitment to build missile defense installations in Poland. Putin was pleased to take America’s grovel in stride, a harbinger of his appetite for Ukraine.

There are Obama’s calculated insults to England, its Queen, and Prime Minister, and his penchant for bowing to despots. When Honduran president Zelaya attempted to break his nation’s constitution and remain in office as a banana dictator, Obama sided with Zelaya, against Honduras’s Congress and Supreme Court. When the brave Hondurans defied America’s president, he punished them with sanctions and isolation.

His destructiveness was only getting started. Obama’s infamous apology tour in the Middle East, which he lauded as the Arab Spring, was really the kickoff for the Islamist uprising. There is a unifying sinister thread in the recent chaos there. Every move or expression Obama makes is calculated to help the most extreme elements and to undermine the leaders and populations who would oppose and contain them.

Obama seized on Egyptian discontent to support Mubarak’s ouster, favoring the Muslim Brotherhood to replace him. Those Islamists thugs proved too incompetent and brutal for Egypt to abide. Obama resented and opposed the uprising of millions of Egyptians, and the popular military coup that restored order and confidence. He punished Egypt with reprisals and now refuses to support its aggressive strikes against the Islamic State, the enemy he professes to oppose, but whose name he cannot speak.

Egypt’s president speaks courageously of the need for a reformation in Islamic thought, and Obama ignores him. Obama denies Islam has anything to do with the “violent extremism” metastasizing around the globe.

When protests rose against the far more brutal Mullahs in Iran, Obama ignored their pleas and stood mute, lending implicit endorsement to the Mullahs, the leading sponsors of terror on the globe.

For no apparent reason, he decided to back Libya’s rebels and bomb Qaddafi—who had been cooperating with America since the Bush administration—thrusting that nation into chaos that would kill an ambassador in Benghazi, overtake the embassy in Tripoli, and effectively cede the nation to Iran’s control.

He bluffed and blustered against Assad’s brutality and chemical massacres in Syria, but in the end, wouldn’t lift a finger against Iran’s puppet. Worse, his premeditated fecklessness gave Putin the stage to pretend to solve a crisis Obama had no interest in addressing. Putin’s brokered resolution lasted only until world attention waned. The slaughter in Syria continues, as Iran wants it.

Against Iran, Obama lifts no finger and barely a voice. Indeed, he sees Iran as a desirable strategic ally. He pretends to oppose a nuclear Iran, but everything he does suggest the opposite. He ended US sanctions. He refuses to give Congress oversight or a vote in any deal with Iran. He promises to veto any measure to restore sanctions or even to allow Congress a voice in approving a nuclear deal.

It’s possible Obama’s record reflects stupidity and incompetence. But, the Harvard Law Review president is probably neither stupid nor incompetent. More likely, he intends exactly what his policies have wrought:

America’s allies don’t trust us. America’s enemies don’t fear us. Ordinary Americans are poorer and more dependent on government than ever before. America’s rich and elite sycophants are better off, better connected, and defend this regime against the rabble who dare suggest the transformer doesn’t love America.

Whatever Obama means by pronouncing the words “I love America,” he does not mean what most Americans understand those words to mean. He has no interest in a society advanced by freedom, enterprise, churches and private associations. He opposes the Constitution’s restraints on national and executive power. He opposes its protections of people’s property, speech, and active dissent. He deploys executive branch agencies like the IRS, EPA, and Justice Department to choke opposing speech by any means. He wants citizens, businesses, and religions to salute his vision and comply.

The modern Left has hijacked the Democratic Party and the national media; they agree with Obama. That is why they bitterly denounce the question whether such a person can be said to love America. They love their own power and the different America they imagine, not our national heritage, traditions, and the things that made America exceptional. Rudy knows it. We know it.