Seton Motley
|
Posted: Feb 23, 2016 1:41 PM
Share   Tweet
The opinions expressed by columnists are their own and do not necessarily represent the views of Townhall.com. 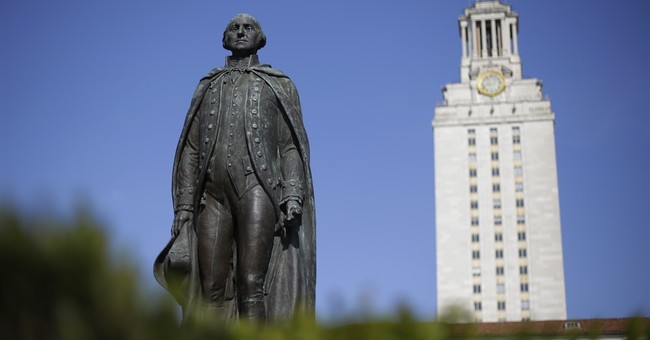 Last Monday was Presidents Day. But that holiday is relatively new - an amalgamation of the birthdays of George Washington (President #1, February 22) and Abraham Lincoln (President #16, February 12). It is now a day set aside to celebrate all American commanders-in-chief.

Since yesterday was Washington’s actual day of birth (and he is thus far my favorite president) I think we should look at another, lesser known contribution he and several of his successors made to our nation. They were inventors.

When asked how he wanted to be remembered, Washington replied “As a farmer.” And it was in all things farming that he was constantly tinkering - and inventing. And he understood the vital importance of people with the capital to invest - to invest in inventing. “Washington recognized that experimentation was anathema to all but the most forward looking farmers. Instead, Washington believed that it was the responsibility of wealthy farmers to undertake experimentation, as failures would be inevitable and losses would have to be absorbed while new techniques were perfected.”

As my friend John Berlau

Washington had absolute admiration for his fellow inventors,

Washington was not alone amongst our Chief Executives. His first Secretary of State - and our soon-to-be third President - Thomas Jefferson was a prolific inventor. “Among Thomas Jefferson’s inventions were such devices as a macaroni machine that he invented in 1787, the swivel chair, the spherical sundial, the moldboard plow and the cipher wheel, which was an ingenious way to allow people to code and decode messages. Jefferson’s cipher wheel was used until 1802, and then it was ‘reinvented' just prior to World War I and used by the US army and other military services to send messages back and forth…. Several of Thomas Jefferson's inventions are still in use today; they deal mainly with agricultural and mechanical products.”

Washington birthday-mate Lincoln too was an inventor. “In two separate boating incidents, one as a teenager on the Mississippi River and one on the Great Lakes, President Lincoln got his boats stuck in shallow waters, known as ‘shoals.' These two experiences inspired Lincoln to invent a solution to help him navigate his boat through shallow waters. A wooden model of this invention, which Lincoln made himself, is in the Smithsonian Institution.”

And Lincoln thoroughly understood - and brilliantly summed up - the importance of protecting intellectual property: “Lincoln called the introduction of patent laws one of the three most important developments ‘in the world's history,’ along with the discovery of America and the perfection of printing.”

The discovery of America was important - but only because of what she became. She became what she is in large part because of the indemnity of patents and all other forms of intellectual property. America is an idea - built upon many, many other ideas.

Lincoln knew these ideas must be protected. Because the inventors need the protection - and, as Washington noted, investors need to know their investments in inventors are protected.

Unfortunately, there is in our current Congress - House and Senate - an effort underway to dramatically undermine our patent law protections. The bills are - like the Congress that extruded them - an abysmal mess.

Rather than revisiting these messes, Congress should adhere to this 1966 movie title: “Don’t Just Do Something, Stand There.”

And we have to decide with whom we stand: Birthday Boy Giants George Washington and Abe Lincoln, and their fellow inventors who helped build this nation - or a tiny cadre of the members of the shambles that is our current Congress.

It isn’t a tough call.