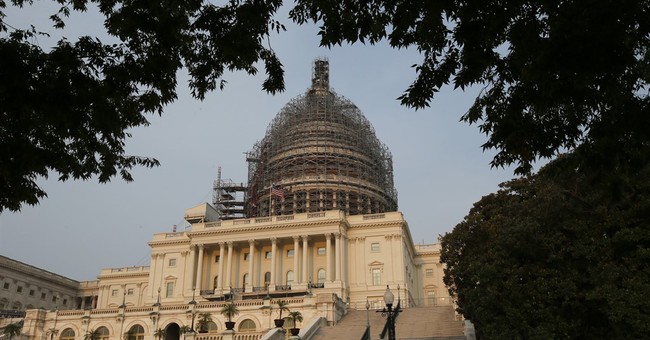 The entirety of the United States is now a federal disaster area - rendered thus by Washington, D.C. Unlike areas hit by hurricanes, tornadoes and other acts of God - our cataclysm is entirely man-made. Decades of anti-Reality policies have left our nation an uber-addled mess.

The components of why are myriad. Too much spending, too much debt, too much and too many taxes, too many (unilateral) regulations, and on, and on, and….

Let us look more deeply at another - terrible legislation. When D.C. mentions a new bill - and starts throwing around words like “omnibus,” “comprehensive” and “reform” - batten down the hatches.

An “omnibus” is a grossly over-large spending bill which serves as a catch-all for ridiculous waste, fraud and abuse - past, present and future. Its enormity allows for tens of thousands of stupid expenditures to be tucked into its fatty, flabby folds. The 2015 “CROmnibus” was a D.C. Dumb twofer - a hastily passed, 1,695-page Continuing Resolution (CR)-Omnibus combo that continued our absurd spending trajectory - without any of the appropriations-process analysis, discussion and debate.

“Comprehensive” is similar to “omnibus” - in that it is far too often an overly-huge bill. And it is often combined with “reform.” If you consult your Government-to-English dictionary, you’ll find as its definition: “Government is about to make things dramatically worse. See: ‘comprehensive’ health care ‘reform’ (ObamaCare).”

What’s worse, “comprehensive” “reform” is often dropped to address a relatively minor private sector problem - a nuclear bomb detonated to deal with a gnat. ObamaCare is a multi-trillion-dollar, totally-disruptive-takeover - when for a few billion dollars we could have just given millions of people health insurance.

Worse still is when D.C. foists upon us “comprehensive” “reform” - that doesn’t even address the actual problem. The absolute worst (and this is quite often the case) - is when the actual problem is of D.C.’s own making. Our Government-to-English Dictionary here says “See: Dodd-Frank ‘comprehensive’ banking ‘reform’ - which did nothing about the Community Reinvestment Act (CRA). A law that forces banks to make the toxic loans that caused the global economic collapse that begat Dodd-Frank ‘comprehensive’ ‘reform.’”

And so all of this is with the “comprehensive” patent “reform” D.C. is currently considering - the 2015 Innovation Act.

The 2013 Innovation Act was a much simpler, much more streamlined bill - a mere sixty-one pages. Not really at all “comprehensive.” That bill overwhelmingly passed that House. How else do we know it was a much better bill? The then-Harry Reid-Democrat controlled Senate never considered it.

There’s a saying: “A camel is a horse designed by committee.” So it is with the 2015 Act. It is 3-1/2 times longer than the 2013 Act - weighing in at an even two hundred pages. Relatively small by D.C. standards - but the dramatic increase from 2013 has transmogrified this pony into a Bactrian.

The additional pages are mostly a la carte carve-outs for various interests. When a bill is inflated this much by this many special sections - the various chunks almost never work well together (again - “See: ObamaCare”). Forget seamlessly - the various gears often incessantly grind against one another. And, like with ObamaCare, we don’t know (for sure) they don’t work as one until well after the legislation has become law. Which is, obviously, WAY too late.

And the intent of the 2015 Act is to curtail people using overly-broad patents to sue everyone and their mothers for using without (paid) permission their overly-broad patents. But it doesn’t address the actual problem. The problem is the government - in the form of the United States Patent and Trademark Office (USPTO) - approving overly broad patents. If sue-happy people couldn’t get the government to approve their ridiculous patent applications - none of the ensuing mayhem could possibly happen. The 2015 Act doesn’t address this - at all.

Real reform would be smaller, tighter - and correctly aimed. None of which the 2015 Innovation Act is. It is time to scrap it - and start again, this time in the correct form and direction. Let’s stay away from “comprehensive” - and the only “reform” we really need is of government.