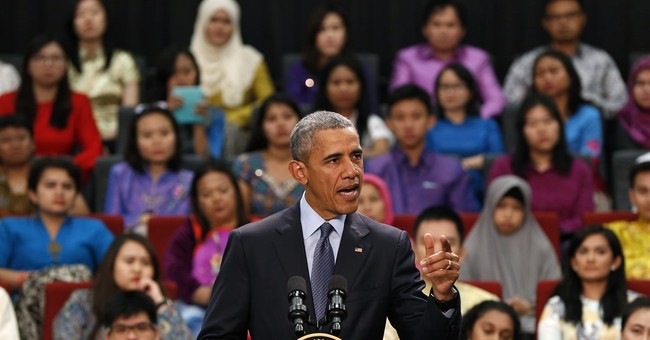 These are undoubtedly troubled times.

With the horrific terror attacks in Paris on the minds of many, and the rising threat of the Islamic State turning its attention to other targets -- maybe closer to home -- it feels as if the world is exploding around us.

And through the lens of a presidential election, the problems overseas as well as here at home look even more menacing and intractable. But are we still a great nation?

In the 2008 election, we asked ourselves where we'd been and where to go next. In John McCain, voters saw the past and in Obama a promising future. But who we are in this very moment in time -- and whether we're great -- is the question that this presidential election is shaking out to answer.

The Republican frontrunners say definitely not. Donald Trump is famously promising to make America great "again," and at his one-man-shows to packed crowds he points out all of her flaws and problems, from porous borders to high wages and women who feel under-cherished by their commander-in-chief. Much like his 1988 purchase of the Plaza Hotel for $390 million, his campaign for president is as much about restoring America-the-brand to greatness as it is convincing you it desperately needs this makeover.

Dr. Ben Carson, too, believes America is in need of some invasive surgery, and that many of her problems simply haven't benefited yet from his careful consideration. He's also taken to inventing some. For one, he'll presumably solve our pluralism problem by making Muslims ineligible for the presidency. He'll eradicate homosexuality by closing all the prisons. And he'd very much like to start a proxy-war with Russia.

But over on the Democratic side, Sen. Bernie Sanders is also one of its biggest critics, calling for a Scandinavian socialist makeover.

There are many things wrong with that, not the least of which is that Scandinavian prosperity has largely come about "during periods characterized by free-market policies, low or moderate taxes, and limited state involvement in the economy," according to Nima Sanandaji's new book, "Scandinavian Unexceptionalism." That and Sweden and Denmark are currently having serious second thoughts about the longevity of Scandinavian socialism. But perhaps Sen. Sanders should move to one of those countries instead of running for president of this one.

The Democrats' frontrunner, Hillary Clinton, seems confused about whether America is great. While simultaneously defending much of President Obama's record, she is also insisting real change is needed, and that change should have lady parts.

As she told Anderson Cooper in the first Democratic debate when asked how she wouldn't be a third Obama term: "Well, I think that's pretty obvious. I think being the first woman president would be quite a change from the presidents we've had up until this point, including President Obama."

In my opinion, the frontrunners have it wrong. Clinton, Sanders, Trump and Carson have duped the American people into genuinely believing (a) that this great Republic needs rescuing and (b) that they are just the person to do it.

But this is dangerous paternalism, and a strike against both optimism and humility. A presidential candidate who thinks America is lousy but for his or her future contributions is a charlatan and a huckster. They're not just pushy door-to-door salesmen; they're selling you encyclopedias they've written themselves and insisting you're doomed to a life of ignorance without them.

The Democrats' Martin O'Malley and the Republicans' Carly Fiorina have made similarly patriotic defenses of American greatness.

The frontrunners might be winning on fear and pandering, but shouldn't our next president -- at the very least -- think America's pretty great already?