What Donald Trump is Doing Right 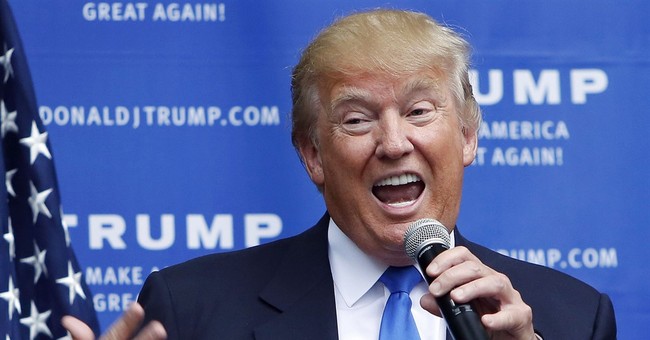 On the left and the right, he's called a buffoon and a blowhard, and occasionally Donald Trump lives up to those descriptions (see his presidential announcement speech). And despite covering him constantly, most in the media insist Trump's candidacy is unserious and his viewpoints are dangerous.

And yet -- and yet -- he is doing well in public opinion polling -- so well that more than one headline has referred to his "momentum." He is leading among Republican primary voters in North Carolina, according to a recent Public Policy poll. A CNN/ORC poll has him trailing only Jeb Bush among Republican voters nationally.

That could simply reflect how visible he's been the last few weeks, but I think there's more going on here.

Trump's rise is a reflection of Americans' utter distaste for politicians and the way they speak, not their identification with most of Trump's views.

After all, everyone has an uncle or a buddy who talks like Trump. "And another thing!" you can hear them saying at Thanksgiving or the neighborhood bar. They don't speak in canned sound bites. They don't focus-group their opinions. They don't quote Edmund Burke. They don't refuse to answer questions that aren't pre-screened. They don't worry who will be offended. And, yes, they exaggerate from time to time.

Donald Trump's announcement speech was, frankly, a conversation you could hear at half the dinner tables in this country. And lest you think straight-talking boasts and cranky complaints about the decline of America are the sole domain of the right, take a listen to Bernie Sanders. Everybody's got an uncle like him, too.

For the past decade, both parties have stalled on immigration reform. It may feel like President Obama's executive actions granting temporary amnesty to millions was a big deal -- and it was -- but it wasn't a big solution. We still have a broken immigration system, and the sad secret is that both sides like it that way. Republicans get to rail against sanctuary cities, and Democrats get to call Republicans racists.

So for average Americans who hear Trump say he'll build a giant wall, even if it isn't a solution they agree with, it's one they can appreciate. It's simple. It's direct. It isn't wrapped in politically correct, insincere promises that no one believes.

Likewise, when Trump says he'll "bomb the hell" out of the oil fields in Iraq to combat the Islamic State, it isn't that average Americans think that's necessarily a good strategy. It's that, after feckless foreign policy created and then failed to contain the rise of this terror group, and a president who won't even call it "Islamic extremism" out of political correctness, Trump's uncomplicated and unreserved response is refreshing.

Now, all that said, do Americans want a president with some polish, discretion and discipline? I think so. We should demand that our commander-in-chief be informed by more than his gut or the fact that he "just sold an apartment for $15 million to somebody from China."

But who knows how deep Trump goes, because few are challenging him to get specific or substantive? Most reporters just find 10 different ways to ask him how much he hates Mexicans. But how would he getMexico to pay for a fence? What would he do with the "dreamers," the undocumented immigrants who were brought here as kids and were raised as Americans? How would he create jobs for Latinos? I don't know if he has good answers to those questions or not. But if someone would ask him, we'd find out pretty quickly whether he was a serious contender or more on a par with your neighborhood barfly.

There's a case to be made that Trump makes the other GOP contenders look good. Voters like straight talk, but they also don't want their leaders to fly them into a mountain. But there's also a lesson here for those hoping to compete in a Trump primary: Drop the politician's polish and talk like humans talk. Dump the focus groups. Ask your uncle instead.