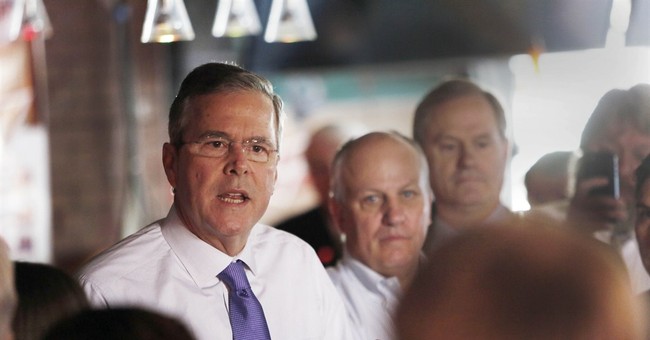 There's no way around it -- Jeb Bush fumbled this one.

It took him three whiffs at a question he should have fully anticipated before he got remotely close to an answer, which only came Thursday after a week of trying.

Whew. We can all go back to work now.

It's almost inexplicable that -- of all the possible questions -- he did not have a tight, direct, prepared answer to this one. But as other Republican candidates and the media pile on Bush for his clumsy responses, is anyone even a little alarmed that there is nothing, crickets, radio silence from the only presidential candidate who actually voted for the Iraq War?

Hillary Clinton, who officially has been in the race for over a month now, has adopted a new strategy of "remote campaigning," where she breathily announces a new platform issue -- say, income inequality, policing reform, immigration -- from the stage of a big campaign event, gives very few if any substantive details, and then takes no questions from the media about them.

In fact, Clinton has made herself so unavailable to media that the Washington Post has taken to counting the minutes since she last took a question from a member of the press. (As of the writing of this column, it had been 33,103.5 minutes, or just over three weeks since she last answered a question that wasn't from pre-screened attendees at her campaign events.)

In contrast, on the Iraq question alone, Bush -- who, incidentally, has not announced his candidacy yet -- took it four times in three different states (five times if you count the College Democrat who worked her way into a press scrum in Nevada to harangue Bush about how his brother had "created" ISIS).

And yet, aside from the question clock, many in the political media don't seem too bothered by Hillary's arms-length campaign approach.

In the Washington Post, Ed O'Keefe and Robert Costa were exceedingly generous with their phrasing, asserting that on Iraq, Clinton "has stayed out of the fray entirely." The less polite version: Clinton has dodged that question -- and others -- entirely.

In the New York Times, Clinton watcher Maggie Haberman sugarcoated Clinton's unavailability, calling Bush "generally more visible" than her, and even went so far as to say of Jeb that "despite his deep political ties and his family's history in elected office, he remains a novice on the national campaign trail."

Of course, it's easy to be an expert on the campaign trail when you don't have to answer any tough questions.

NPR's Don Gonyea and Domenico Montanaro seemed to suggest that Clinton has already sufficiently answered the Iraqquestion. "Clinton, unlike Bush," they wrote, "has since said her vote was a 'mistake.' "

But what they fail to acknowledge is that she didn't say it, she wrote it in her book, "Hard Choices," which was published last summer. If addressing controversial issues in glossy autobiographies a year ago counts as sufficient explanation and accountability to voters and the media, then no one need ask Jeb about immigration, or Scott Walker about labor, or Rand Paul about foreign policy -- it's in their books.

Meanwhile, since she wasn't talking about Iraq, what news out of Hillaryland was the media covering this week?

In the Washington Post: "Hillary Clinton's got Beyonce. And that's Important."

In Time: "Hillary Clinton shows her support for Harriet Tubman on the $20 bill."

At least we know where she stands on the important issues.

Needless to say, Jeb Bush seems lethargic. It's only May 2015 and the road to November 2016 is long and hard. With plenty of tough questions and gotcha questions in his future, it would be good to at least get the predictable ones down pat.

Same goes for Hillary, if she ever deigns to talk with the press.