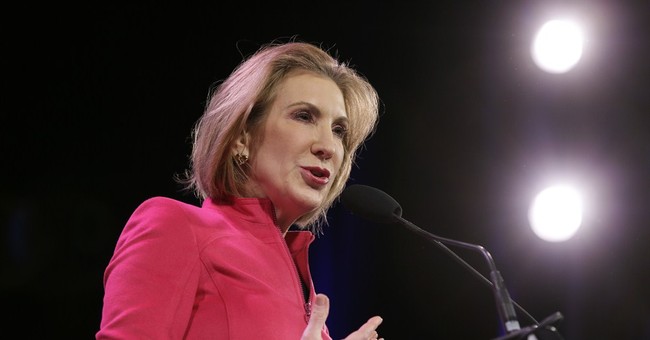 In a preview of what might just be the laziest coverage angle of the 2016 presidential season, a new article about Republican presidential hopeful Carly Fiorina tries to compare her to -- get ready to act surprised --Sarah Palin.

In case you aren't familiar with her, Fiorina was the first woman to lead a Fortune 20 company, becoming CEO of Hewlett-Packard in 1999. She has never held elected office. She was born in Texas to an artist and a federal judge, and earned degrees from Stanford University, MIT and the University of Maryland. She is a cancer survivor, and she was named the most powerful woman in business by Fortune Magazine in 1998.

She has almost nothing in common with Sarah Palin biographically, other than the fact that -- like many Republicans -- they share similar political positions. And they both have a uterus.

That's enough, however, to warrant one writer's indolent suggestion that Fiorina is the GOP's new Sarah Palin.

The New Republic's Naomi Shavin (who is inexplicably a woman herself) has managed to achieve the impossible: lowering the standards for the liberal media's coverage of Republican women, which I thought had reached a nadir in the 2008 coverage of Palin.

Think again! For starters, as evidence that Palin and Fiorina share some DNA, Shavin suggests "obvious similarities" like, "Both favor words like 'outsider' and 'tough.'" So, they both use two words that every other Republican also uses. They must be twins!

Not convinced? They both "allow themselves to be cast as a woman who does it all: they're breadwinner moms with business savvy and enough charisma to make their raw ambition palatable."

Swallow hard before unpacking that one. Yes, Palin and Fiorina are both successful women with children. (Fiorina has helped raise her second husband's two daughters.) That also describes millions of other women. The part that should offend any good feminist, though, is the bit about their charisma making their "raw ambition palatable."

Would anyone write that of Hillary Clinton? Not if they wanted to live to see their next byline. In fact, the pro-Hillary group HRC Super Volunteers recently released a list of words that they will consider sexist when used to describe their favorite lady, including "polarizing," "inevitable" and, yes, "ambitious."

The most groan-worthy bit, however, comes when Shavin calls Fiorina "an upgraded Palin."

First of all, with Fiorina's private-sector business background, wouldn't it be more accurate to call her "an upgraded Romney"?

Secondly, and more importantly, it's hard to imagine this being an acceptable thing to write of any other group of people besides Republican women. Imagine the uproar if anyone called New Jersey Sen. Cory Booker an "upgraded Barack Obama," or Elizabeth Warren "an upgraded Hillary Clinton."

Speaking of whom: In case you weren't already convinced by her many illustrative examples, Shavin finally insists that "the one thing that really unites Palin and Fiorina is their willingness to criticize Hillary Clinton."

Of course, this is something that unites all Republicans, and even a bunch of progressives. Not to mention the fact that Clinton is the likely Democratic nominee. Who is Fiorina meant to criticize as she hits the campaign trail -- Michael Dukakis?

Look, I'm not mad that Shavin's clearly sexist attack on Fiorina was published by the New Republic. It's their prerogative to publish even the most distasteful and hypocritical of viewpoints. I do blame the New Republic, however, for publishing something this lazy. A good editor -- and a 10-year-old -- would have pushed for more substantive analysis.

As for Fiorina, she's taking the high road. "It's sad, but not surprising, that the left wants to define me by my gender instead of by my beliefs or what I've accomplished," she wrote to me. Wait a minute -- that sounds a lot like something Sarah Palin would say. Spooky.