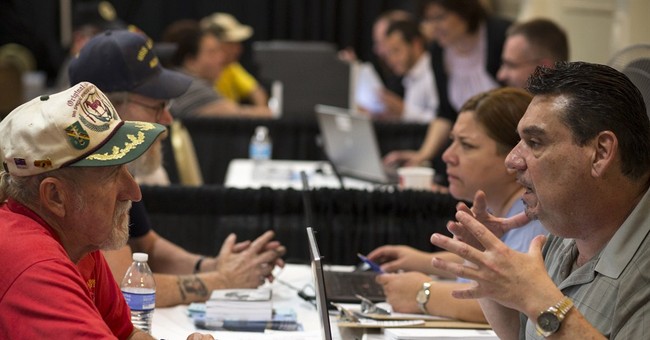 This week the Associated Press reported that an audit of the Department of Veterans Affairs showed that more than 57,000 patients are still waiting for initial appointments more than 90 days after requesting them. An additional 64,000 are enrolled, but have never seen a doctor. The audit also found that 13 percent of VA schedulers said their supervisors told them to lie about wait times so they seemed shorter.

For anyone still doubting how seriously the situation at the VA has deteriorated, the FBI has just announced that they will be opening a criminal investigation into the conduct of VA officials.

While the major networks have covered the atrocities at the VA, none have reported why the system failed our veterans. That’s because this is what the Left’s single-payer health care looks like. Single-payer refers to a system in which a single organization or agency is responsible for organizing health care financing.

In a recent interview with Ezra Klein of Vox, Rep. Nancy Pelosi was asked about Obamacare and the upcoming election. She knows Obamacare is a loser for Democrats and Americans know that Obamacare is not working and, more importantly, it is not improving the quality of health care. When asked what would improve Obamacare, Pelosi said, “Of course, I wanted the single payer.”

Like the VA scandal, this is not an isolated incident. Prominent Democrats such as Senate Majority Leader Harry Reid, former HHS Secretary Kathleen Sebelius, and even President Obama himself have all, at some point, voiced their support for a single-payer system.

Despite clear signs of failure, Democrats want to double-down on government takeover of your health care. As Pelosi said, their only “fix” is to put every American in a system like the VA’s. If you don’t want to take her word for it, just look at some of the mechanisms of the broader Affordable Care Act itself.

Aside from the glitchy websites and unprecedented mandates, the legislation gutted Medicare Advantage in order to incentivize seniors to abandon their choice-based private plans and enroll in single-payer Medicare. In addition, Obamacare’s insurance “markets” (a serious misnomer) jammed over 6.7 million more individuals into Medicaid, a single-payer healthcare entitlement, in just six months.

Keeping the single-payer-for-all prize on the horizon, the Left touted the “success” of the VA in its support for Obamacare. Klein, then with The Washington Post, said the VA was “one of the most remarkable success stories in American public policy.” He also said it was an example of “when socialism works in America.”

Now the Left feigns outrage over a system they want to implement for everyone. In a press conference, Rep. Pelosi said, “Again, on the battlefield, we leave no soldier behind, and when they come home, we leave no veteran behind. This is an oath, this is a pledge, this is a commitment, and we have to get this done, and now we have to put it on a path of getting it done right.”

As with Obamacare, they have no real fix for the VA’s problems other than calls for more funding and finger-pointing at the previous administration.

In a recent post at the Fiscal Times, Ed Morrissey wrote:

“The VA … was supposed to be different. Slate’s Timothy Noah wrote in 2005, ‘socialized medicine has been tried in the United States, and it has been proven superior to health care supplied by the private sector.’ New York Times economic analyst Paul Krugman wrote a series of columns over the last several years extolling the single-payer VA system.”

Democrats now want to pretend that the VA system isn’t what it is designed it to be — a system that leaves patients at the mercy of bureaucrats. Yet the message is clear despite the smokescreen of outrage: as Nancy Pelosi asserted, the VA model – that is, single-payer – is their “fix” for Obamacare.

We’ve seen how this system treats our heroes and, without exaggeration, it has been downright criminal. Now just imagine when it’s average Americans like you and me.