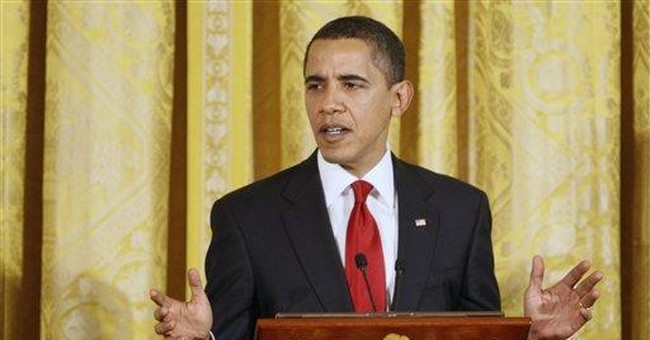 Obama has declared war on America. He says he is gearing up to fight anyone who disagrees with him. He has singled some of us out by name: Joe the Plumber, Rick Santelli and of course the mightiest voice among us, Rush Limbaugh. Rush, according to the latest Democrat strategy of marginalizing anyone who disagrees with them, is the leader of the Republicans. The Democrats say this because they need a face to represent the patriotic Americans that they are planning to attack. The Obama administration and the Democrats keep repeating Rush’s line that he wants Obama to fail, and they say that nothing could be more un-American than to root for Obama to fail. I can think of many things more un-American than wanting Obama to fail; Democrats rooting for the United States to fail in the war on terrorism, for example. Senate Majority Leader Harry Reid said in April 2007, “This war is lost and the surge is not accomplishing anything”; and the Speaker of the House, Nancy Pelosi, announcing to the world that we had lost in Iraq and we should bring the troops home in defeat, empowering our enemies to kill more American soldiers. And they did it for selfish reasons, undermining the war effort with abject lies, divided the nation and provided them an opportunity to win more seats in the House, Senate and win back the White House. That is far more un-American than anything anyone has said about Obama.

The truth is that nobody hopes Obama fails, but many of us are rooting for America’s survival as a free and prosperous nation and that means blocking Obama’s agenda everywhere we can.

What is striking about this is that while Obama has declared war on his fellow Americans at home, he is attempting to establish friendly relations with some of the worst people in the world, anti-American dictators and self proclaimed enemies of the United States. Perhaps voters should have noticed when so many of our nations’ enemies were supporting Obama during the presidential campaign. Hamas leaders endorsed him, so did Ahmadinejad the Iranian dictator, Castro, Venezuelan strongman Hugo Chavez and others. Obama says he wants to talk to the Iranian leader and to the terrorist group Hamas, while savaging patriotic Americans.

“I know these steps won’t sit well with the special interests and lobbyists who are invested in the old way of doing business, and I know they’re gearing up for a fight as we speak,” Obama said in his weekly radio address. You’re damn right we are gearing up for a fight. I am not ready to surrender the greatest nation in the history of the world to a tin horn tyrant who never outgrew his adolescent communist stage. “The old way of doing business” as Obama puts it, is the American way and it has lead to more prosperity than any other “way” and provided more opportunity and economic freedom than the world has ever seen. That “old way” of limited government and free enterprise, however, is an impediment to Obama’s aggressive socialist agenda, and so he declares that he is going to fight us. Obama is fine with burning the bridge of prosperity behind him because he has his wealth, but he didn’t earn it the “old way”-- he got his the easy way, by trading favors from his public office for private ones and using his elected office to sell books about himself. If he had gotten it the hard way, like many of the people he plans to take from, he would have too much respect for their work ethic to take from them their resources to buy votes that increase his power and his lot.

Mr. Obama, why don’t you take your “new way” over to some of the former Soviet Republics, who in the 1990s broke free from the chains of tyranny, and see if you can talk them into trading their new economic freedom for your promises of government sponsored security. You wouldn’t get very far because they have been down that road before.

Obama has fired a shot at those of us who oppose his onerous socialistic policies by characterizing our dissent as preparing for battle and warns us, “My message to them is this: So am I.”

My message to Obama is this -- Mr. President, why don’t you stand up to those who hate America instead of declaring war on those of us who love it?