America's War of Independence, Civil Rights Movement Were Part of the Same Revolution

Scott Rasmussen
|
Posted: Dec 14, 2018 12:01 AM
Share   Tweet
The opinions expressed by columnists are their own and do not necessarily represent the views of Townhall.com. 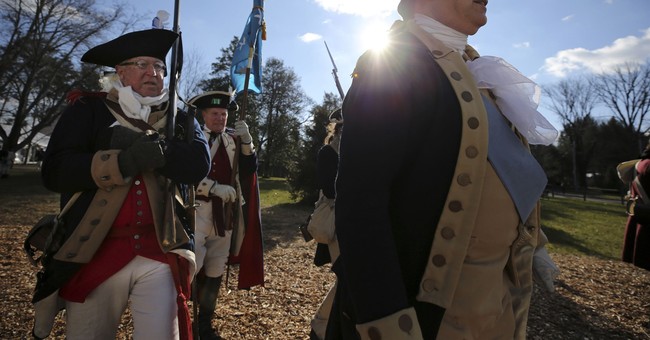 Many of our political differences today stem from different perceptions of American history.

On the surface, it appears as if there's a lot of common ground in understanding that history. Ninety-five percent of voters believe that the founding ideals of freedom, equality and self-governance played an important role (including 74 percent who consider those ideals "very important").

But once you look beneath the surface of that common understanding, it becomes apparent that we're not all looking at the same history. While just about everyone agrees on the vital role played by our noble founding ideals, the same cannot be said about the importance of slavery.

Forty-eight percent of voters under 50 believe slavery played a very important role in the development of our country. Just 34 percent of older voters see it as that significant.

Fifty-two percent of Democrats think slavery has played a very important role in making our nation what it is today. That view is shared by 37 percent of independent voters and 33 percent of Republicans.

Not surprisingly, the racial divide is even wider: 79 percent of black voters say slavery is a very important factor. Forty-eight percent of Hispanic voters agree, along with 33 percent of white voters.

These contrasting perceptions play out in data, which shows that 66 percent of voters are proud of America's history, while 33 percent are ashamed. As you would expect, those who see slavery as playing a larger role are more likely to be ashamed of our nation's history. So, 50 percent of Democrats are ashamed of our history, a view shared by 31 percent of independents and only 14 percent of Republicans.

For understandable reasons, 66 percent of African-American voters are ashamed of the United States' history. At the other end of the spectrum, 74 percent of white voters are proud of the country's history, along with 65 percent of Hispanic voters.

Amid these competing perceptions of our past, there is hope and common ground for the future.

In the competition between the noble founding ideals and shameful history of institutionalized racism, 82 percent of all voters believe the noble strand will dominate American politics in the future. It's a view widely shared across partisan and ideological lines.

Our task today is to make that expectation a reality. Now is the time for the shameful strand of our history to die and the noble strand to flourish. To make this happen, we must be totally committed to shaping the culture by building a society worthy of our highest ideals. It is time to recognize that America's War of Independence and the Civil Rights Movement were part of the same revolution, a revolution for liberty, equality and self-governance.

Those ideals are the essentials we can build upon together while agreeing to disagree on the details of policy.