Politics of Tax Reform Depends Upon Salesmanship of President Trump

Scott Rasmussen
|
Posted: Dec 21, 2017 12:01 AM
Share   Tweet
The opinions expressed by columnists are their own and do not necessarily represent the views of Townhall.com. 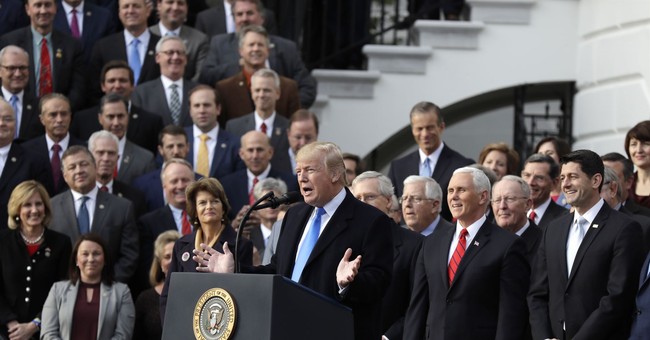 Many Democratic political leaders have convinced themselves that the Republican tax reform bill will be a great boost for the Democrats in next year's midterm elections. They could be right, but the outcome is far from certain. Instead, the political implications will be determined by how the economy performs and President Trump's salesmanship.

The economy matters most of all. If it sputters or tanks in 2018, nothing will save the Republican majorities in Congress. But if the economy keeps improving, President Trump will have a chance to turn tax reform into a political windfall for his party.

Presidential salesmanship has always had a big electoral impact. In 2002, Democrats thought that the Bush tax cuts and the president's drive to invade Iraq would doom the GOP. Instead, the president campaigned aggressively on his agenda to help his party regain control of the U.S. Senate.

In 2004, President Bush's poll numbers were soft heading into the summer and many expected he would lose his bid for re-election. At the time, the War on Terror was the top issue in the nation. As the president campaigned, confidence in the U.S. efforts improved and so did the president's poll numbers.

In 2012, President Obama's poll numbers were also soft heading into the summer of his re-election bid. At that time, the key issue was the economy rather than a national security focus. But as the president campaigned, public confidence in the economy improved enough for President Obama to be re-elected.

So, the key question for 2018 will be President Trump's salesmanship. With a decent economy, he'll have a lot to work with and sell. In addition to tax reform, he'll point to the very significant steps he's taken to reduce the regulatory burden on the economy. And, he'll benefit from the fact that only about 5 percent of Americans will see their taxes go up next year. According to the left-leaning Brookings Institute, over 80 percent will see a tax cut averaging over $2,000.

If the president can convince enough swing voters that his regulatory and tax reforms are responsible for creating a better economy, the Republican Party could have a relatively good midterm election.

In addition to the economic message, the president will also be able to emphasize his appointment of Neil Gorsuch to the Supreme Court and other judicial appointees. In many Republican leaning states, that will be a very powerful reason to retain a GOP Senate majority.

To be clear, I am not suggesting that Republicans are going to have a good election night next November. Midterm elections almost always result in losses for the party in power. However, the extent of those losses will depend on what happens between now and next November rather than by the details of the tax reform bill.