To Move Our Nation Forward, Lift Up America's Founding Ideals

Scott Rasmussen
|
Posted: Aug 17, 2017 12:01 AM
Share   Tweet
The opinions expressed by columnists are their own and do not necessarily represent the views of Townhall.com. 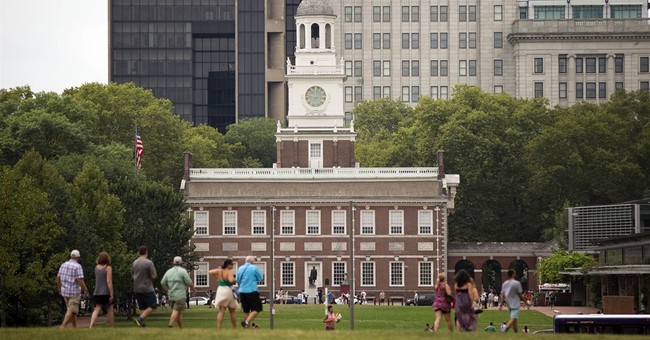 In the decade leading up to America's War for Independence, much of the drama took place in and around Boston. Sam Adams was the ringleader on the colonial side and public enemy number one to the British. He had been thinking about liberty and independence since he attended Harvard decades before. He was motivated partly because what we would now call the Regulatory State targeted his family because of their political views.

Eventually, British troops were sent to occupy Boston and keep things from getting out of hand. Naturally, the occupying force was hated and the tension between colonists and Redcoats grew. Recognizing how angry the Bostonians were, Adams worked hard to keep them from erupting into an angry mob.

On March 5, 1770, that challenge became more difficult when British soldiers fired into a mob and killed five colonists. In the colonies, the event became known as the Boston Massacre and the British were clearly at fault. As is usually the case, the truth was a bit more complex. On top of the already heightened level of tension, colonists knew that the soldiers had orders not to fire. So, they taunted the young British men, threw things at them and dared them to shoot.

Eventually a shot was fired and people died, and the facts didn't seem to matter. There was a definite desire in Boston for revenge rather than justice. Rather than riling them up further, Sam Adams recognized the importance of ensuring a fair trial for the soldiers. He wanted the colonists to show the world that they were the civilized party in this dispute. So, Sam and others encouraged his younger cousin to defend the British.

Out of respect for the rule of law, John Adams agreed. It was not a popular move for someone thinking of a political career. It became even more unpopular when he successfully defended the soldiers arguing that "facts are stubborn things." His law practice suffered and he lost perhaps half his clients. But, later in life, John Adams considered taking this case at this time to be one of his finest moments.

It was actions like this that developed America's founding ideals and defined our national commitment to freedom, equality, and self-governance. The words were nice, but the actions mattered more.

Unfortunately, a commitment to our nation's founding ideals is lacking in our political leadership today. Some on the political left are uncomfortable with giving people freedom to decide for themselves; some on the right struggle with equality. And, politicians all across the spectrum would prefer to centralize power in their own hands rather than embrace self-governance.

As a result, our political system is badly broken. In fact, it may be broken beyond repair. It has been more than 45 years since a majority of Americans trusted the federal government. Simply put, our government does not have the consent of the governed, a reality that's not likely to change any time soon.

To move our nation forward, we need to look away from the failed political system that divides us and focus on the noble values that unite us. It's time to celebrate the core values of freedom, equality, and self-governance with more than words. Like Sam and John Adams, we must stand up for them even when it hurts.