Scott Rasmussen
|
Posted: Apr 14, 2016 12:01 AM
Share   Tweet
The opinions expressed by columnists are their own and do not necessarily represent the views of Townhall.com. 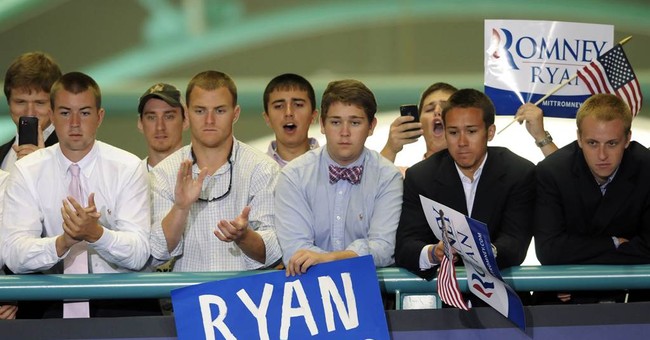 Trending
As I've watched the 2016 campaign unfold, I've come to realize that the millennial generation has a better grasp on reality than the nation's top political journalists. The younger voters recognize that we live in a world where the culture leads and politics lags behind. Journalists, on the other hand, mistakenly cover political campaigns as if the opposite were true.

A few years back, veteran journalist Ron Fournier wrote about this disconnect in a thought-provoking article. He noted that millennials "are fiercely committed to community service." But, "they don't see politics or government as a way to improve their communities, their country, or the world."

Fournier "spent two days at Harvard, and couldn't find a single student whose career goal is Washington or elective office... To Millennials, the world is filled with injustice and need, but government isn't the solution. They have apps for that."

The millennials I've spoken with make it clear that this is not an anti-government attitude, it is simply a matter of pragmatism. They've grown up in a world with so many choices that if one path doesn't work, you try another. If one app doesn't work, you delete it and download another.

Fournier was troubled by a generation looking to solve problems outside of government. He called it "Revolutionary, maybe worse."

For me, this perspective is a reason to be impressed by the millennials. They recognize that politics often offers little more than the choice between the lesser of two evils. While there is some value in helping the lesser evil win, younger Americans recognize that much more is needed to seriously address the nation's challenges.

Millennials are aware that we need to devote more of our energies towards serving others in our communities rather than getting caught up fighting petty, partisan political battles. They embrace an all-hands-on-board approach to problem solving that unleashes the creativity and resources of individual Americans, families, community groups, churches, entrepreneurs, small businesses, local governments, and more.

This view is consistent with what professors Sid Milkis and Marc Landy call the "American Creed." The scholars note that "No other country has a set of key principles and statements to which its citizens adhere to the same degree that Americans adhere to the principles of 'life, liberty and the pursuit of happiness.'"

At its core, that Creed is a belief that we all have the right to do what we want with our own lives so long as we don't interfere with the rights of others to do the same. It is an attitude still embraced by the American people today, brimming with optimism about what a free and self-governing people can accomplish. We cherish our freedom but recognize its greatest value can be found when we use that freedom to build community.

By recognizing that politics alone cannot move our nation forward, the Millennial Generation fills me with hope. Sooner or later, the politicians will figure it out as well.