The Polls Show Trump Lagging Behind Biden And Everyone Else, But The Betting Market Tells A Whole Other Story

Scott Morefield
|
Posted: Jun 29, 2019 12:01 AM
Share   Tweet
The opinions expressed by columnists are their own and do not necessarily represent the views of Townhall.com. 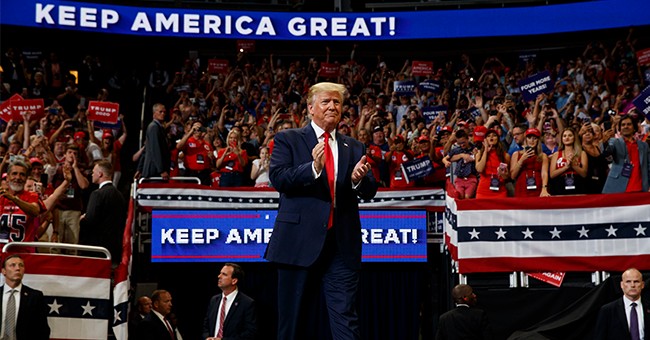 I know. I know. Polls mean nothing, and we all know then-candidate Donald Trump was down big-time in almost every one back in 2016 for, well, pretty much the entire cycle until the actual election results proved the polls to be a giant sack of you know what. This time around, however, with the president supposedly polling double digits behind everyone both dead and alive with a D beside their name, it’s hard not to get a little discouraged if you’re all in for four more years of MAGA.

There are several reasons for this, of course. One, any hypothetical, non-tested candidate will likely poll better than a known incumbent. These Democrats haven’t really battered each other yet, and Trump hasn’t had a chance to turn his full attention on the individual who ends up surviving that process.

Second, polling is only indicative of attitudes at that point in time, and we all know time and events are ridiculously fluid. Michael Dukakis led George H.W. Bush by as many as 17 percentage points five months before the 1988 election before Bush pulled out a seven point win. In January 1983, Reagan only led Mondale by one lousy percent in an election that would go on to be one of the most historic landslides in history. John Kerry led George W. Bush by six points in March 2004, but Bush pulled it out by three in the end.

Third, and perhaps most importantly, leftists and an enabling media have made openly supporting the president almost taboo, something to hide, to be embarrassed about. This is likely one reason Trump underperformed in the polls in 2016, and that will be even more of a factor now. When that pollster calls, all but the most vocal Trump supporters will either not answer, hang up the phone, or tell the pollster what they know they want to hear, then (hopefully) vote their wallet, and America, when they get to the privacy of the voting booth.

Even so, wouldn’t it be great to hear a little good news? Well, I’ve got some - not from polls, but from political betting aggregator website US-Bookies.com. The site, which uses millions of betting dollars worldwide to provide market trends, also specializes in U.S. politics and who wagerers think will win at any given time.

Political betting is currently illegal in the U.S., but is alive and well in other markets. In fact, US-Bookies.com predicted via press release Tuesday that over $100 million will be spent in the 2020 race, “making it the biggest non-sports betting event of all time.”

The front runner for Democrats, no nobody’s surprise, is Joe Biden, with a 16.4 percent chance of becoming president. This is double Elizabeth Warren and Pete Buttigieg’s 8.2 percent. Kamala Harris and Bernie Sanders come in at 6 percent, and O’Rourke leads the also-rans at 2.2 percent.

Interestingly, President Trump has a 45.2 percent chance of winning a second term, US-Bookies says. I wondered if this statistic had something to do with the fact that Trump is already the de facto GOP nominee, and a company spokesperson told me that yes, indeed, that was the case. However, even in a straight-up battle with Biden, Trump still enjoys 51.2 to 48.8 percent lead over the former vice president, the rep told me.

Rather than a percentage lead, however, “these numbers are an expression of probability of each candidate winning 2020, derived from the global betting markets (worth $100m or more), where investors are asked to make an accurate prediction as to who they think will win the race,” the spokesman said. “The money wagered on each candidate dictates the odds and therefore the percent chance, based on simple laws of supply and demand. In 2016, some election simulators and polls gave Trump under a 2% chance of success, while the betting market comfortably gave the president anywhere between a 25% and 40% chance of success.”

I’ll leave you with this from the US-Bookies.com press release:

"But as many turn to the odds to get an accurate picture of the Dem candidates' varying prospects, the message from the bookmakers remains crystal clear: there has never been a better chance of another 4 years of Trump in the White House.”