Scott Morefield
|
Posted: May 20, 2019 12:01 AM
Share   Tweet
The opinions expressed by columnists are their own and do not necessarily represent the views of Townhall.com. 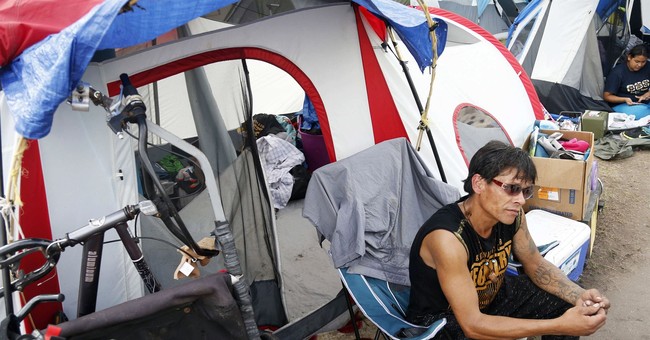 A recent business trip to the liberal-run capital city of Texas left me impressed with the food, music, and overall quirky “weirdness” that is Austin, but it also left me generally disenchanted at the difficulty its working citizens must have in enjoying ANY of it. Why? Just take a walk, anywhere, and you can’t miss them - sleeping in the streets, sitting on sidewalks and benches or wandering aimlessly about. Stop for a second and, like clockwork, one will probably approach you, begging for some “spare change” or “a couple bucks” to “get home” or “buy something to eat.” If you’re in a vehicle, one might come at you with a squeegee and a nasty rag, then get angry when you try to wave them off or, worse, refuse to pay the obligatory two dollars for a window “wash” you never asked for. No, it doesn’t take very much time at all to figure out that Austin, Texas has a severe homeless problem.

But it’s not just Austin. Visit any city, especially a liberal-run one, and you’ll likely be approached multiple times anytime you venture downtown. These drug-addled denizens literally litter the streets of most of America’s major cities and plenty of its minor ones, and even the ones that aren’t shoplifting, pickpocketing, or smashing car windows are generally making as much of a nuisance of themselves as they’re legally allowed, up to and including defecating on the streets (looking at you, San Francisco).

If you’re naively thinking you’ll visit a restaurant and a few shops for a fun night on the town, think again. They know what you’re up to because they’ve got nothing else to do but watch, and they’ve got no issues with invading YOUR personal space to coerce or steal what they consider rightfully theirs.

Even if you’re a first-time visitor to a place homeless people frequent, it won’t take you long to learn to quickly distinguish between the homeless and everyone else, not just by the noxious, overpowering stench and disgusting filth permeating from every inch of their skin and clothing, but also the hollow, empty looks in the eyes of people living for nothing except their next hit, and striving at nothing except how to find it by doing absolutely no meaningful work whatsoever.

For the record, while I give to church and charities, I have a personal policy against giving one red cent to any panhandler who approaches me, and there are no exceptions to this rule. In fact, it’s so hard and fast that I would shout it to anyone who approaches me were it not for the possibility of violence when dealing with volatile people in today’s world. So instead, I do what everyone else in America’s big cities has learned to do - I ignore them, like they’re not even there, like they’re ghosts or gnats or mere obstructions on the way to where I’m headed. And if I accidentally give them a first look, I certainly don’t give them a second. It's actually a tragedy that normal folks have literally been forced by these people to keep walking, heads down, instead of enjoying the view, enjoying life, and interacting with their community. But that's what it's come to for many.

So yeah, if you’ve made it this far you’ve probably figured out that I don’t have a lot of patience for homeless people. I just don’t. Call me heartless, mean, or even deserving of some real karma - I don’t care, and I’m not apologizing for it. Sure, I understand the “there but for the grace of God go I” concept, and sure, that could be me, wandering aimlessly around town, pitching a tent under a bridge, bothering good citizens for my next meth hit. But probably not, because I also know that, by and large, the choices we make lead us to where we want to be. I also know that giving someone a handout isn’t good for anyone in the long run and only perpetuates a vicious cycle.

Also, as someone who has sat behind a desk literally begging people to go to work for seemingly always-hiring clients, I don’t have much sympathy for someone with their hand out when I know good and well there are jobs out there. I also know that panhandling IS a job for many, as John Stossel adeptly documented in this MUST WATCH video. Sure, maybe the real jobs don’t all start out at CEO, but most jobs can lead to a good life for anyone willing to work hard and work their way up from the bottom, as most of us have.

Bottom line, it’s high time American cities made homelessness illegal. It’s not impossible. In fact, former Mayor Rudy Giuliani famously did it in New York City twenty years ago. ''Streets do not exist in civilized societies for the purpose of people sleeping there,'' Rudy said in 1999, according to The New York Times. ''Bedrooms are for sleeping.'' To America’s Mayor, the right to sleep on our streets ''doesn't exist anywhere. The founding fathers never put that in the Constitution.'' Indeed, they did not.

Enforce the laws against loitering that likely already exist. Outlaw panhandling. Then, create a series of facilities where the homeless have to work and stay off drugs and alcohol in exchange for food, shelter, and clothing, and have police tell them it’s either go there or straight to jail. “You choose.” And for the love of everything holy, America needs to rebuild, reopen, and refill its mental asylums. Instead of allowing them to roam our streets, mentally ill people should be in an institution getting treatment, whether they want to or not. Maybe that sounds uncompassionate, but is it any more “compassionate” when a mentally ill person doubles the victimhood by committing a crime against someone else, then gets sent to prison where treatment is inadequate or nonexistent?

It’s beyond time we start making our cities great again, and that starts by outlawing homelessness.