Is President Trump Playing Checkers With Democrats On Border Security, Or 3-D Chess?

Scott Morefield
|
Posted: Jan 27, 2019 12:01 AM
Share   Tweet
The opinions expressed by columnists are their own and do not necessarily represent the views of Townhall.com. 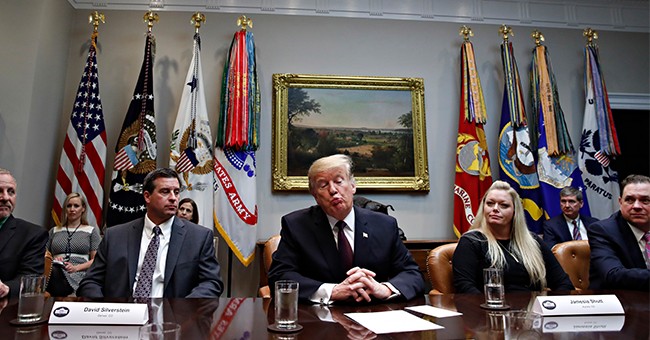 The liberal narrative on Trump’s decision to sign a continuing resolution to re-open the government through February 15 tends to portray him as a cornered and desperate president, eager to give red meat to his base and build an “immoral” wall with electric wire, gun turrets, and an alligator moat, instead seeing the literal walls closing around him, the writing on the wall, and the wall of opposition to his proposal and subsequently caving, tail between his legs, to the awesome gloriousness that is Saint Nancy Pelosi.

The border hawk narrative, on the other hand, is, well, pretty much the same thing (except you’d have to insert “garden fence” for the whole alligator moat thing). Fox Business host Lou Dobbs called Trump’s decision a “victory for Nancy Pelosi.” Rush Limbaugh said the “flaw” in Trump’s thinking is to assume the Democrats “will negotiate in good faith.” Conservative commentator Ann Coulter tweeted, “Good news for George Herbert Walker Bush. As of today, he is no longer the biggest wimp ever to serve as President of the United States.” And that was one of her nicer ones.

For the record, I’m a border hawk. If I could wave a magic wand and insert a 30 foot wall with all the trimmings on every conceivable mile of our border with Mexico, I totally would. I’m also a long-time Ann Coulter reader, and I completely agree with her contention that securing the border is by far the most important policy achievement that Trump or any GOP president could possibly hope for.

And it’s more than just a national security, humanitarian, and cost issue - it strikes to the root of our Constitutional form of government itself. By filling the country with Third Worlders with authoritarian, socialist-leaning tendencies, Democrats hope to ensure a permanent supermajority when immigrants and their descendants are eventually able to vote. To suggest any other primary motive, or even to pretend Democrats care about actual human beings, is to lie or be extremely naive. Coulter knows this, and Trump knows this, although most Republicans would still prefer to keep their proverbial heads in the sand.

Except neither President Trump, nor Ann Coulter, nor I, nor anyone else on the planet can wave a magic wand and create a lego wall on our kitchen tables, much less a border wall between the United States and Mexico. For that, it takes actual government funding, funding Democrats have been able to successfully block thus far.

White House Press Secretary Sarah Sanders gave them “21 days” before the president builds the wall “with or without the Democrats.” That sounds great, and I’m all for it, but if even one Obama-appointed judge says “nah,” it’s all over.

So, for lack of a magic wand, it’s going to take some politics, and there is some evidence to suggest the tactic of exposing Democrats for their true position on border security, deployed long-term, could work. Consider the words of CNN’s Dana Bash, who on Friday said she’s been “hearing from senior Democrats that they are hearing more and more from their rank and file, particularly the new members who tend to come from more moderate districts saying they’re getting pounded because the Trump message, the Republican message that they don’t care about border security has started to seep in as well.”

A middle ground in terms of how to take Trump’s decision, laid out by Texas Congressman Dan Crenshaw in his tweeted expression of support for the president on Friday, seems to be the more reasonable approach.

“The President is yet again compromising,” Crenshaw tweeted just after news broke of the president’s willingness to temporarily fund the government. “The consistent Democrat talking point over the last few weeks has been this: ’we don’t mind discussing physical barriers, we just can’t talk about it with the government shut down.’”

We’ve all heard it, from countless Democratic politicians and liberal talking heads who doubtless sensed that Nancy Pelosi’s simplistic “no” on any wall funding wouldn’t suffice in its own - If Trump would just ‘open the government’ and ‘quit holding Federal works hostage,’ they said, we might be able to negotiate some sort of deal.

Several hours later, Crenshaw stated that the president essentially did what he “had to do.”

“Mr. President, you did what you had to do,” Crenshaw tweeted. “Now House Democrats will be forced to debate border security and not a shutdown. And I’ll be on Homeland Security Committee to do just that.”

By removing the whole ‘holding Federal workers hostage’ from the Democrat vocabulary, Trump hopes to shift the political winds in the direction of at least some border wall funding. If he’s right, it’ll go down as one of the smartest political moves of his presidency. If he’s wrong, he had nothing to lose anyway, especially considering the fact that the public, rightly or wrongly, was blaming him for the shutdown anyway.

To the headline, it’s hard to know whether the president is playing 3D chess or checkers with border wall opponents, but either way, he made the only logical move he had to make.