The Seven Craziest Things Alexandria Ocasio-Cortez Has Said So Far

Scott Morefield
|
Posted: Nov 26, 2018 12:01 AM
Share   Tweet
The opinions expressed by columnists are their own and do not necessarily represent the views of Townhall.com. 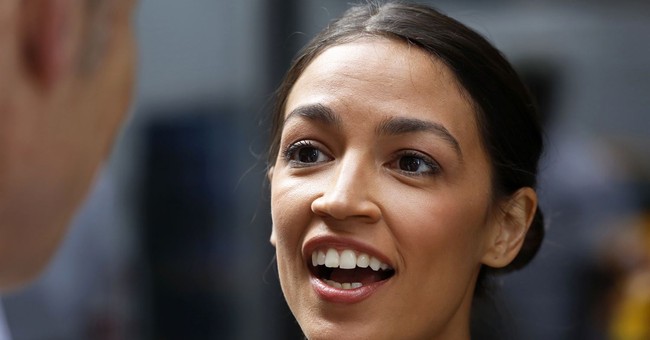 Ever since Alexandria Ocasio-Cortez shocked the world by upsetting long-time Democratic Rep Joe Crowley in New York's 14th congressional district last summer, the self-proclaimed Democratic Socialist has been the gift that keeps on giving - to conservative reporters and commentators.

That’s because just about everything that comes out of the young congresswoman-elect’s mouth is either patently untrue, ridiculously unworkable, unintentionally hilarious, or ripped straight from the pages of Das Kapital (in which case it’s all of the above).

So, without further ado and in no particular order, here are seven of the craziest things Congresswoman-elect Alexandria Ocasio-Cortez has said thus far in her young political career.

Too Many Of Those Evil White Males Oppose Nancy Pelosi, Otherwise Maybe I’d Be In

“I mean, if anything, I think that what it does is that it creates a window where we could potentially get more conservative leadership,” Ocasio-Cortez told MSNBC’s Chris Hayes just last week, referring to a letter opposing Pelosi’s leadership signed by 16 Democrats, far too many of whom sadly share the wrong gender and skin color.

“And when you actually look at the signatories, it is not necessarily reflective of the diversity of the party,” she continued. “We have about 16 signatories, 14 of them are male. There are very few people of color in the caucus. There’s very few ideological diversity. It’s not like there are Progressives that are signing on. It’s not like you have a broad-based coalition. So I find it — you know, I’m not totally bought into the concept.”

Unless you play Identity Politics like today’s liberals do, the above statement will seem absurd. But in Ocasio-Cortez’s world, buying into a concept apparently has more to do with the race and skin color of the adherents than the merits of the concept itself.

I get it. History is hard. But does Ocasio-Cortez really want to bring up Democrats and slavery? Really?

Defeating Global Warming Is Pretty Much Like When The Allies Defeated Nazi Germany, Or Something

“So, when we talk about existential threats,” Ocasio Cortez said during an October campaign rally, “the last time we had a really major existential threat in this country was around World War II. So, we’ve been here before, and we have a blueprint of what we did before. None of these things are new ideas. What we had was an existential threat in the context of a war, and what we did was that we chose to mobilize and industrialize our entire economy and we put hundreds of thousands if not millions of people to work in defending our shores and defending this country.”

I think the real question is, who DOESN’T think of the Allied victory over the Nazis when they think of ways to deal with global warming?

If Climate Change Isn’t Addressed, People Are Gonna Like, Die And Stuff

“People are going to die if we don’t start addressing climate change ASAP,” Ocasio-Cortez tweeted last week. “It’s not enough to think it’s ‘important.’ We must make it urgent. That’s why we need a Select Committee on a Green New Deal, & why fossil fuel-funded officials shouldn’t be writing climate change policy.”

That’s right, unless the United States and other industrialized nations (but really, just the United States) gives up the modern technology that has allowed us to expand the average lifespan by decades over the last century, people are going to die.

“Well, you know, in this political moment, it’s so unique and sometimes I feel like I have this job of being something of a social worker or even a therapist in my district because this period has been so re-traumatizing for so many folks and especially in a country where we do not have reliable access to health care, let alone affordable health care,” Ocasio-Cortez told Chris Hayes last month. “This has been a very difficult time for immigrants, women, survivors, people who care about the health of American democracy. It’s very stressful.”

Poor wittle snowflakes … So stressful … Thankfully, they elected both a representative AND a snowflake-therapist to help with all the traumatizing caused by that orange meanie in the White House.

“I have three months without a salary before I’m a member of Congress, so how do I get an apartment?” Ocasio-Cortez asked The New York Times earlier this month. “Those little things are very real.”

To be sure, nothing says ‘working class’ like becoming an international celebrity while winning a race for a $176,000 per year job, then poor mouthing about not being able to afford an apartment only to have the media reveal that you were probably lying about it. But some ordinary non-socialist-type working folks might be a bit put off by the whole thing. Put it this way - GOP Rep Sean Duffy was out of work for 8 months and had 6 kids before coming to Congress in 2011, but you didn’t read about his struggle because he didn’t whine (or lie) about it to the New York Times.

“We’re gonna flip this seat red in November,” Ocasio-Cortez said in July during a rally for a Kansas Democratic Congressional candidate. Honest mistake or Freudian slip, as in Communist ‘Red?’ Probably the former, but given that we’re talking about a bona-fide socialist, the irony is just too good to pass up.

There you have it, seven of the craziest things Alexandria Ocasio-Cortez has said so far. Now that she is firmly entrenched among the ranks of the highest profile elected Democrats, you can bet there will be plenty more where those came from.