Scott Morefield
|
Posted: Oct 01, 2018 12:01 AM
Share   Tweet
The opinions expressed by columnists are their own and do not necessarily represent the views of Townhall.com. 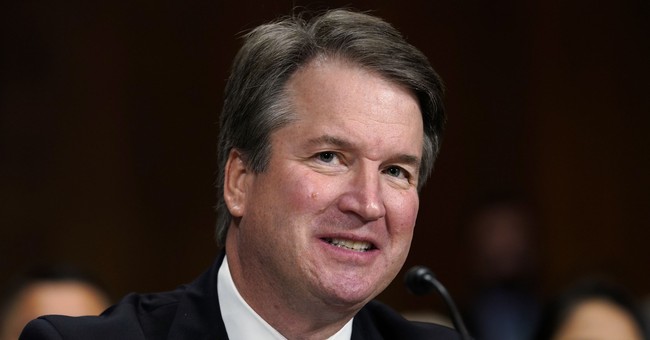 An FBI investigation: It’s all they wanted, don’t you know. Repeatedly. Ad nauseum. From Sens Cory Booker to Amy Klobuchar, it was the relentless talking point Democratic Senate Judiciary Committee members harped on over and over again in their questioning of Judge Kavanaugh on Thursday. And it worked, to some extent, to score pretty much the only mildly significant PR points they were able to score against an otherwise brilliant performance by Judge Kavanaugh on Thursday.

Their reasoning went something like (read in your best snake voice ...): ‘Why, Judge Kavanaugh, if you are innocent, why wouldn’t you want, nay DEMAND, the FBI to conduct a full investigation into the 36-year-old claims against you when you were a high school student? It’s not like you’ve got anything to lose since, well, you’re innocent - or you say you are anyway. You DO want to clear your name, don’t you?’

It sounds logical, on the surface at least, which is why Democrats kept rolling with it (Give them a break, will you? Normally even the appearance of logic is lacking from anything liberals say, so can you blame them for latching onto this like a Schnauzer to a new chew toy).

Judge Kav kept responding by asserting his innocence and stating that he would do anything the committee wanted him to do. Yet he couldn’t, or wouldn’t, state the obvious, likely because of how it would have been perceived and pounced upon by partisans looking for a bone to chew. The obvious being that who in their right mind, knowing they are innocent, would willingly invite the FBI or any other law enforcement agency into their life to investigate something they KNOW they didn’t do? Especially when the only basis behind the allegations is someone lying or misremembering something and, because of the extreme cold-case nature of the accusation and the lack of any specific time or place, the near impossibility of proving one’s innocence (Yes, despite the absurd, Owellian insistence of Senators Blumenthal and Coons, who have zero qualms about turning thousands of years of Anglo-Saxon jurisprudence on its head by claiming the accused should prove the accuser wrong).

There are other reasons, of course, like copycat “accusers” wanting THEIR moment in the spotlight and the fact that the FBI won’t really do much the Senate Judiciary Committee hasn’t already done. But Republican senators did point out the other primary reason to deny an FBI investigation - the clear motive to delay, delay, delay the nomination, nix it, and hold off until after the midterms in hopes of a Democratic Senate which would then literally hold the seat for two years for Trump’s potential Democratic successor. Boom - Merrick Garland avenged, at least in their pajama-boy dreams.

So now, thanks to the ever-flaky squish-brigade captain Jeff Flake, we get a seeming compromise whereby the Democrats get their FBI investigation in presumably enough time to, should nothing new arise, confirm Judge Kavanaugh.

The Democrats took the compromise, for now, because it was the only move they had. But it didn’t take a rocket scientist to know they wouldn’t be satisfied.

“No artificial limits as to time or scope should be imposed on this investigation,” said Blasey Ford attorney Debra Katz, reacting to the stated one-week length.

Already, before the results are even in, at least one senator is calling the investigation a “farce” and complaining about its duration even while admitting “there is time to get to the bottom of it.”

“The thing is that every Senate vote matters and there is – there is time to get to the bottom of it, even if it’s seven days,” said Hawaii Senator Hirono on Sunday, not surprisingly perplexed about the stated duration. “That’s bad enough, but then to limit the FBI as to the scope and who they’re going to question, that – that really – I wanted to use the word farce, but that’s not the kind of investigation that all of us are expecting the FBI to conduct.”

Former FBI Director James Comey called the one-week timeframe “idiotic” even while acknowledging that the agency has the ability to do its job within that limit.

And as we get closer to the investigation’s end, especially if nothing new is uncovered, we’ll see more and more Democratic senators and other assorted Trump haters come out bemoaning the time limit.

Which should lead us to ask - How about a month? Would that be enough? How about a year? I’ll bet a year of “psychotherapy” could churn out all sorts of new “memories” about how Judge Kavanaugh “assaulted” her when they were both teenagers, and we’re still waiting for someone to accuse him of skinning cats and performing Satanic rituals in a New Orleans cemetery in the Fall of ‘81.

I mean, if it can’t get us past the midterms, how is it helping to keep the seat open for an eventual Democrat to fill, amiright?

Isn’t this ultimately what this is all about?

But when they do bemoan the timeframe, and they will, they need look no further than a Friday New York Times report which quoted a former top FBI official stating the investigation “can easily be done in a week.”

Under the header “Can the FBI finish investigating in a week?” the Times reported:

“It’s not impossible. The F.B.I. has plenty of experience mounting large investigations and getting results quickly. In the days and weeks after terrorism attacks or mass shootings, the F.B.I. has completed hundreds of interviews and processed mountains of evidence, like video footage or the contents of computers and phones.”

“In this case, the F.B.I. is likely to make the investigation a top priority, instructing agents across the country to conduct interviews. ‘The F.B.I. investigation can easily be done in a week,’ said Lauren C. Anderson, a former top F.B.I. official.”

“I think it’ll be over in a week,” Caputo said Sunday on CNN. “We have been hearing for a week about how Clarence Thomas’s only took three days and we all know the FBI looked at 650,000 of Hillary Clinton’s e-mails in just 24 to 36 hours. So, it’ll just take a week.”